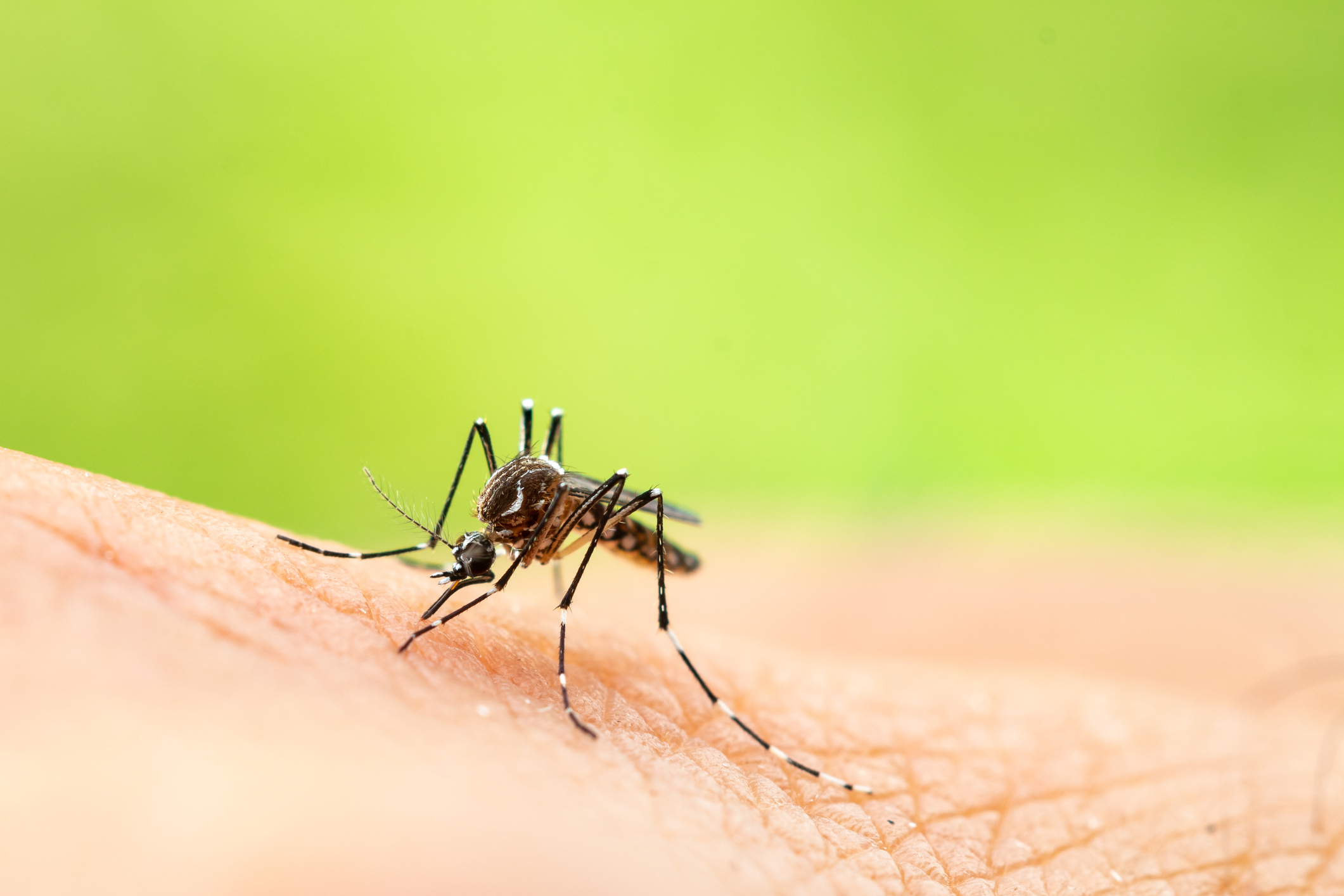 Mosquitos and their related diseases played a role in many historical events. Photo by frank600 / Getty Images.

Fifty-two billion people—almost half of the cumulative human population—are thought to have perished at the hands of a creature no bigger than a fingernail: the mosquito. In his 2019 book The Mosquito: A Human History of Our Deadliest Predator, historian Timothy Winegard exposes this insect as not merely an itchy pest, but a force of nature that has dictated the outcome of significant events throughout human history. From ancient Athens to World War II, Winegard highlights key moments when mosquito-borne diseases caused militaries to crumble, great leaders to fall ill, and populations to be left vulnerable to invasion.

In addition to addressing the mosquito’s pivotal role in battle, Winegard reveals some uglier effects of its diseases, such as how malarial resistance contributed to the rise of the African slave trade, and the concept of biological warfare.

Winegard spoke with Smithsonian about the book and if modern technology can defeat this threat to humanity—and whether it should.

A lot of people acknowledge that insects, despite being pesky or annoying, have an important role in our overall ecosystem. Do mosquitoes they contribute anything another than just being a parasite?

We don’t know yet if mosquitoes have an absolute purpose ecologically. The males do drink nectar and pollinate plants, but not to the degree that other insects do, like bees. They don’t ingest waste, like some other insects do. As far as we know, they don’t serve an indispensable food source for any other animal. So no—looking at the historical impact of the mosquito, perhaps their role is a Malthusian check against uncontrolled population growth, and within the ecological balance and equilibrium of Mother Nature.

What are some of the most common misconceptions people have about mosquitoes?

In countries that are relatively free of mosquito-borne disease, or have been free of mosquito-borne disease for the last half-century, we tend to think that they're just annoying pests. We fail to realize that they’re a global problem, especially with trade, travel, and the increased mobility of human populations. There are over 100 trillion mosquitoes on the planet at any given moment, that’s the estimate. It's a universal problem that requires a universal solution.

Your book deals with adaptation, both mosquitoes’ evolved resistance to chemicals and human adaptations, like sickle cell or Duffy negativity, to mosquito-borne disease. How do the timelines of these two adaptations compare to each other?

Evidence suggests that mosquitoes evolve quicker than humans. But the human response to what would have been unrelenting malaria in Africa—the sickle cell natural selection, hereditary gene—is unbelievable. It is a testament to the sheer power malaria had on early populations in Africa that humans developed sickle cell through natural selection so incredibly quickly.

Do other animals have genetic adaptations to mosquitoes, or is it mainly humans that have traits like sickle cell or Duffy negativity?

Great apes seem to have adapted to malaria where they carry the parasite, but it doesn't cause symptoms. The same with reptiles and amphibians, they also carry malaria parasites—different from the ones with humans—and they've adapted to show very mild or no symptoms. All creatures on the planet want to survive, and natural selection is essentially forcing or promoting their ability to do that.

One fact that surprised me in your book was that mosquito-borne diseases didn’t exist in the Americas prior to European arrival. Can you explain why?

Seventy-five percent of the diseases are what we call spillover zoonotic transfer, meaning animal sickness that’s carried from animals themselves. Smallpox, measles, mumps—they all come from various animals. In the pre-Columbian America, very few animals were domesticated. The ones that were, like the turkey, essentially domesticated themselves by loitering for scraps—they didn't really require helicopter parenting or supervision. The domestication of animals in the Middle East and Europe allowed for the transference of diseases to humans.

Agriculture was also practiced differently in other parts of the world compared to the Americas. It was not a predominantly surplus agricultural economy in the Americas, so there wasn't as much disturbance of local environments. Agriculture led to higher population densities in Europe and in Africa, which allowed disease to spread more quickly and continued the cyclical contagion.

Your book argues that mosquito-borne diseases have determined the outcome of many battles throughout history, from Athens to World War II. Do you think most people realize the influence of disease in warfare, or do you think society still prefers viewing things from a perspective of manpower, weaponry and resources?

General modern histories find pestilence and disease rather dull when compared to national supermen, which are most often military generals. Not to take away from anything that these men and women did, but [historians] tend to promote their prowess, rather than looking at some of the external factors that influence history. The mosquito was an earth-shattering external factor, especially in wars, because you have armies moving across territory that is foreign to them, as are the microbes in the lands that they moved to. We’re beginning to dig a bit deeper into other factors that have shaped history. And obviously, the mosquito is a paramount agent and driving force of historical changes in trajectory.

Up until the late-19th century, we didn't actually know what caused mosquito-borne diseases. The prevailing thought was the miasma theory, which [stated the cause was] noxious and toxic mists and odors emanating from standing water and swamps. If we look back in history, we can see perhaps the swamps themselves being used as a biological weapon, but not the mosquitoes that threaten the swamps.

But the Nazis reflooded the Pontine marshes in Italy purposely to reintroduce malarial mosquitoes. My wife’s grandfather actually contracted malaria at Anzio as a consequence of this deliberate act of biological warfare by the Nazis.

The role of mosquitoes in the development of the African slave trade is obviously a difficult and charged subject. Can you explain that connection?

It's a sensitive subject as the African slave trade is one of the paramount horrors in human history. Because mosquito borne-disease is ancestral to Africa, more Africans developed genetic resistance to malaria. And then at the same time, they had acquired immunity to yellow fever. So when the indigenous populations of the Americas were no longer viable option for a slave labor force with the near extermination or 95 percent death rate of indigenous people across the Americas, partly from malaria and yellow fever, a substitute was needed.

It also became very obvious that where European indentured servants or European laborers died in the colonial hotbeds of mosquito-borne disease, more Africans survived. So the acquired immunity to yellow fever in Africa unfortunately created a problem and an environment where Africans themselves became profitable on plantation colonies in the Americas.

How did mosquitoes play a role in changing the course of the American Civil War?

It’s interesting to look at the mosquito’s role in the Civil War as twofold. The first is that after the First Battle of Bull Run, it became clear that this wasn't going to be a short war and that it was going to drag on. In 1862, primarily, what you have is Union forces heading South into Confederate territory. So you're bringing unseasoned northern soldiers into mosquito hot beds, and they succumb to mosquito-borne disease on a far greater scale than Confederate troops do. The mosquito prolongs the war.

And then the second factor is when the Union blockade of the Confederacy begins to take hold. The Union has ample supplies of quinine, which is the anti-malarial treatment at the time, while the Confederacy starts to be starved out of all resources, including quinine. Then you see the mosquito essentially switch sides, the fickle ally, and attack Confederate forces in the South with mosquito-borne disease cases in far greater percentages than the Union. So the mosquito starts to eat away at Confederate forces, thereby helping secure Union victory.

When you were writing and researching this book, what specific event was most surprising to you?

[One would be] my wife's grandfather’s story about contracting malaria twice during the Second World War, first with deliberate flooding of the Pontine marshes, and the second time when his regiment helped liberate the Dachau concentration camp, which was the headquarters of the Nazi tropical medicine program. There were experimental mosquitoes and he contracted malaria again. He had no idea how any of this happened until the spring of 2017 when I told him about all of the events surrounding his malarial ordeals during the Second World War.

But on a larger scale, it was amazing to see how very little of our history has not been changed, altered, impacted [by the mosquito]—from small things like the gin and tonic in India, to the larger components of the mosquito’s historical influence, like its help in facilitating the British surrender at Yorktown. The mosquito has had a sweeping influence across human history.

Humans have been battling against this tiny thing for pretty much our entire existence. Looking forward, do we stand a chance? Or are we just doomed to keep trying chemicals or treatments that the mosquito continuously adapts to?

With the emergence of CRISPR gene editing technology, we're faced with an interesting choice. In regards to the mosquito or for any other animal for that matter, including human beings, it seems like we've opened Pandora's box in a way. A lot of questions are being asked currently about moral and legal implications. It’s almost as if Jurassic Park could become real, and science fiction vanishes into nonfiction.

With CRISPR, there's two ways to look at our war with mosquitoes. One is to exterminate the mosquito by way of genetic manipulation using CRISPR, where we would CRISPR male mosquitoes and release them and they would breed with females, and then the offspring would be stillborn, infertile or male, which would obviously bring the mosquito closer to extinction. The other viable option would be to genetically engineer mosquitoes to make them incapable of actually vectoring the mosquito-borne diseases themselves. So we would conquer the mosquito-borne disease without conquering the mosquito itself, making it relatively harmless except for the bite and the normal itch that everyone across the planet has felt.

You write about the lack of research on mosquito-borne diseases in comparison to others. What determines which diseases get priority in terms of money and research?