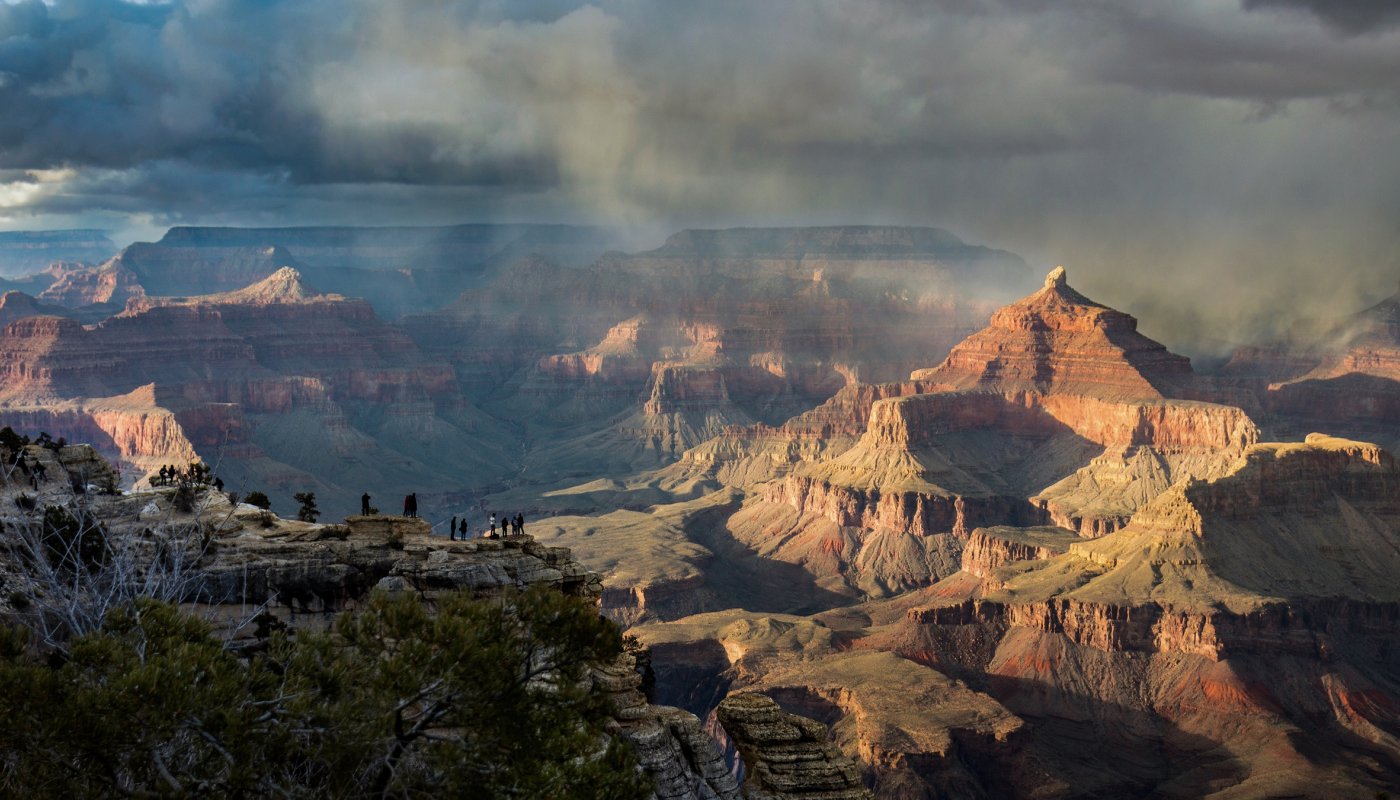 The view will remain basically the same. It's the details that will be unrecognizable. Photo: Art Markiv / Unsplash.

In May 1903, President Theodore Roosevelt visited Grand Canyon for the first time. He was, in a word, gobsmacked.

“It is beyond comparison—beyond description; absolutely unparalleled throughout the wide world,” he wrote. “Let this great wonder of nature remain as it now is. Do nothing to mar its grandeur, sublimity, and loveliness. You cannot improve on it. But what you can do is to keep it for your children, your children’s children, and all who come after you, as the one great sight which every American should see.”

Roosevelt’s wishes, in a sense, have come true. Since Grand Canyon’s inception as a national park in 1919, the 1,904-square-mile preserve has seen more than 212 million visitors who come to hike its trails, spot its 373 species of birds and 91 types of mammals, observe the rock formations, raft the Colorado River, and, of course, post to Instagram.

But that grandeur, sublimity, and loveliness Roosevelt spoke of? It has been marred by the tramplings of feet and the inevitable trappings of time. The Glen Canyon Dam, completed in 1963, has dramatically altered downstream ecology, and the park has a nearly $330 million deferred maintenance backlog that includes much-needed repairs to roads and trails and upgrades to the infrastructure for visitors, whose numbers keep growing. Add to this list climate change and the ways it will affect how we experience the park—and what we’ll see in it.

But just how will Grand Canyon National Park, which celebrated its 100th birthday on February 26, 2019, change in the next century? Here’s what eight experts think.

If they keep using the dam operations they’ve been using, we’ll see more erosion of the sandbars in the river corridor that still exists and more vegetation takeover of the parts of those sandbars that aren’t eroded by the flow. There will also be more erosion of archaeological sites. You’ll probably see new debris fans that are bigger than they would have been without the dam, because the flows aren’t as big as you need to push some of those rocks downstream. That could make some really exciting new rapids.

It will be harder for people to find places to camp. There are tens of thousands of people riding that river corridor every year, and they need places to sleep every night. Some of the most common and most popular camps are on sandbars, on sand deposits. And those are getting smaller.

We will certainly see continued changes in the population dynamics in the fish and aquatic ecosystem and then everything that goes along with it. You change one thing, you change everything else, right? It’s all connected to what happens when you’re in the river down there.

We’ve been working on fees and permits in our portion of the canyon for many years. We’re getting ready to make our presence known, with our law enforcement and our cultural folks, and educating the public as they come down the river that they’re crossing through Hualapai land. But that’s going to come in time.

Most important, though, is just the importance and the recognition of the tribes—Hualapai, Havasupai, Hopi, Navajo, and others who have had affiliations with the canyon way before the anniversary of Grand Canyon National Park. Acknowledgement is something that’s important.

In 100 years, the canyon will still be here. Hualapai will still be here. We’ll still have our traditional places that we take care of throughout the canyon. We have a lot of sites that are ours to go back and let the people of our past know that they haven’t been forgotten, and we still acknowledge them there in the canyon, and we’re still there watching over things.

The Climate Will Affect, Well, Everything

Our research shows that human-caused climate change exposes the U.S. national parks more severely than the United States as a whole to hotter and more arid conditions. And cutting greenhouse gas emissions—from cars, power plants, and other human sources—can save parks from the most extreme heat.

In the Colorado River basin, the hotter temperatures of climate change have coincided with low precipitation. This has intensified the drought that has lasted since 2000, and the Colorado River flow is down by one-fifth. Across the western United States, human-caused climate change doubled the area burned by wildfire from 1984 to 2015 compared to the area of natural burning.

If we don’t reduce our emissions, under the worst scenario, the drought could continue and the flow of the Colorado River would be down by half. This threatens riverside forests at the bottom of the canyon. Projections of wildfires under continued climate change project increases by maybe a quarter, and wildfires tend to change the vegetation.

I think about the best scenario—a scenario on which we’ve already been making progress: a future in which we’ve met the Paris agreement goal of limiting climate change to 1.5 to two degrees Celsius would be a world where we depend on the sun and the wind, rather than polluting technologies. It’s a world where we’ve limited the heating in national parks to two-thirds of what it could have been under the worst scenario, and people would get to the Grand Canyon on some form of renewable energy–powered public transit and be able to see a vibrant and flourishing national wonder.

You can’t live in a house that keeps falling apart. There could be a dystopian future for the park if we’re not able to fund not just the Park Service, but all the things that make this country a great place to live.

When I was seven years old, I first visited the Grand Canyon. I loved the rim and picked up rocks to see how far I could throw them in there. I remember a park ranger putting his hand on my shoulder and saying, “Excuse me. We don’t do that, and here are the reasons why.” So there will be a lot more people throwing rocks if the Park Service isn’t well-funded. We’re dealing with new possibilities.

The Canyon Will Change Its “Clothes”

Kristin Haskins: Director of Research, The Arboretum at Flagstaff, and Co-Editor of ‘Plant Reintroduction in a Changing Climate: Promises and Perils’

As you go up in elevation, there are different vegetation or life zones. What we think will happen is that you’ll see a transition from the current zone to the zone just beneath it. As it becomes warmer and drier, you’ll see vegetation that is more classic to those environments: piñon-juniper will shift more into just juniper and maybe some grasses, which is the vegetation zone that falls below it.

Unfortunately, invasive species come from all over, and anytime you have more traffic going in and out of an area, you have more opportunities for the introduction of invasive species, so that’s been on the rise with increased visitation. There aren’t really protocols in place to check shoes, to check shoelaces, to check equipment to see if there are invasive seeds that could fall out and then grow. It’s definitely a problem, but I don’t even know how you would police that.

In 100 years, I think the park will still be spectacular. It will just be dressed a little different.

The Pipeline Problem Will Come to a Head

Karl Karlstrom: Distinguished Professor of Geology in the Department of Earth and Planetary Sciences, University of New Mexico

The water that supplies Grand Canyon Village is piped from a spring across the canyon called Roaring Springs. This pipeline is old, and it’s breaking and leaking. And climate change threatens to decrease the snowpack year by year on the North Rim, which is what feeds the spring. So, over the next hundred years, as climate change predictions show, that snowpack is going to decrease dramatically, which means that the one source of water—Roaring Springs—very well might not be able to meet its present demand, let alone increasing demand. There’s a lot of geochemistry and structural geology about water that’s going to be important for the sustainability of the park.

Most of the climate models show that it’s going to get drier and hotter, and drier is going to be more serious than hotter because springs could dry up. We have endemic snails in some of these springs. What’s going to happen to them? Bighorn sheep need to drink water, and if they have to go a few extra miles to find it, their range might shrink. Some amphibians depend on these habitats, so their populations could decline. They could then lose genetic connectivity—on occasion, an animal will breed in a new pond, and you get more gene flow occurring throughout the population. But if they start to retract, then you’ll have individual populations that could quite plausibly become inbred, which can cause decreases in survival, fitness, and production. How severe this will be is unknown. But all of these almost certainly will happen.

There will be losses. But we might have some good things. Wolves might reoccur in the park. Jaguars were once that far north, and they could come back.

The Canyon’s Wonderous Geology Will Remain

Humans naturally think on the timescales of decades or years, but it’s important to know the geologic context so you can separate the actions of man from things that probably would happen regardless. But I also don’t want anyone to say, “Alright, these things are being destroyed in the bottom of Grand Canyon, but if we came back in a million years, they would be gone anyway.” I’m not sure that’s the most helpful way to think about things.

I think that it would just take 10,000 to 20,000 years, max. It has taken something like 5 to 10 million years to make Grand Canyon as we see it today. And even if we come back 10 million years from now, there’s still going to be something noticeable there. It would be tens of millions of years before we would return to northern Arizona and literally have no idea that the Grand Canyon was there.