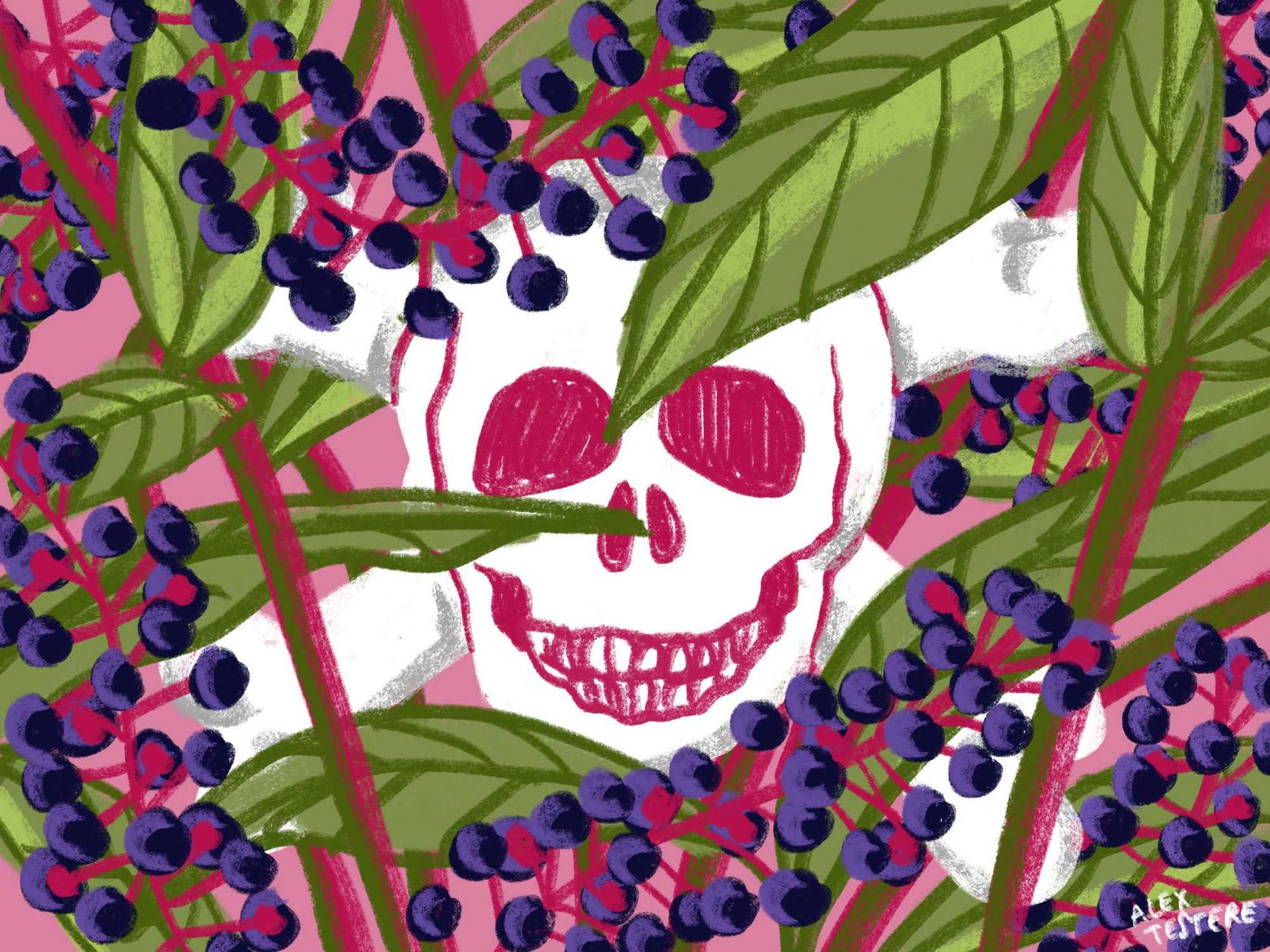 Recently, while visiting me in Brooklyn, my mom’s eyes went twinkly as she noticed all the wild pokeweed growing around the neighborhood. A woolgathering reminiscence of her childhood in Texas spilled forth: cooking and eating the onion-infused greens straight from the pan; her stoic anticipation as her mother added vinegar to the last dregs of poke-broth, knocking it back like a shot of whiskey.

She was surprised to find that my New England–bred boyfriend had never heard of the poisonous, towering perennial weed, with its oblong leaves and magenta berries and stalks. Despite the fact that the kudzu-like Phytolacca americana sprouts up all across North America, poke sallet, a dish made from the plant’s slightly-less-toxic leaves, is a regional thing, popular only to Appalachia and the American South. The leaves must be boiled in water three times to cook out their toxins, and, as aficionados will tell you, it’s well worth the extra effort.

But if pokeweed is so toxic, why did people start eating it in the first place? In a word, poke sallet is survival food. 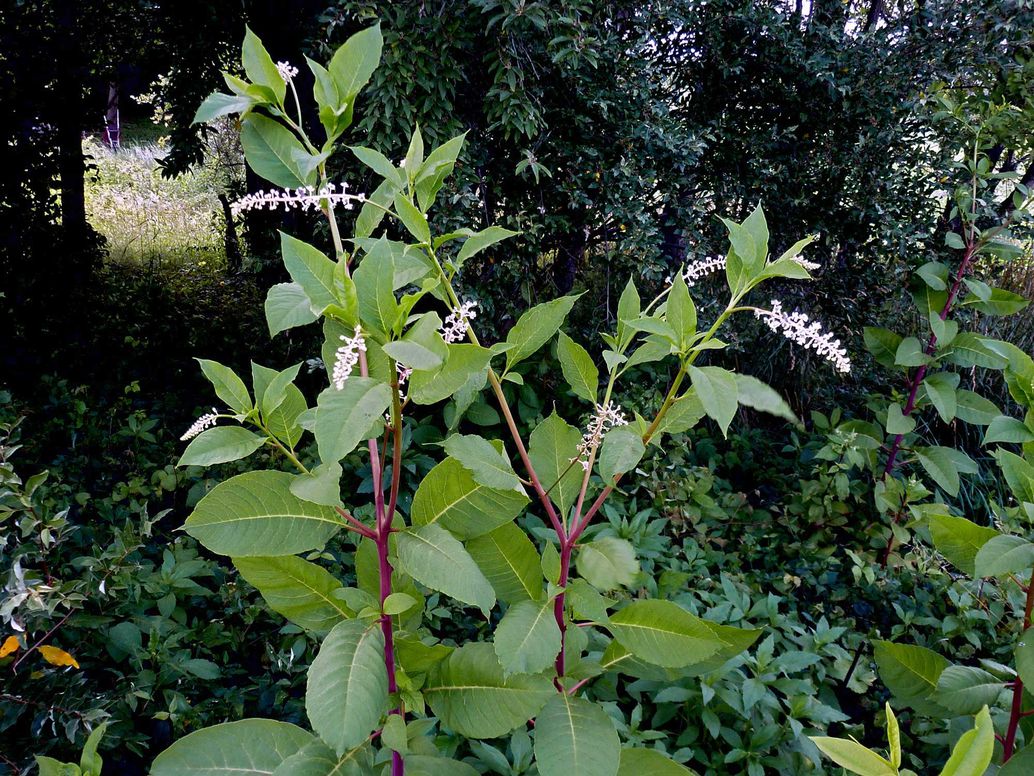 The towering, perennial, poisonous pokeweed can grow up to 10 feet tall. Photo by Wendell Smith.

According to Michael Twitty, historian, Southern food expert, and author of The Cooking Gene, poke sallet was originally eaten for pure practicality—its toxins made it an allegedly potent tonic. "Back in the old days, you had a lot of people who walked around barefoot," Twitty said. "They walked around barefoot in animal feces all the time. Most of our ancestors from the Depression backwards were full of worms." So then, poke sallet acted as a vermifuge, a worm purger.

Memorial Sloan Kettering Cancer Center cites research showing that raw pokeweed has medicinal properties that can help cure herpes and HIV. That said, there are no clinical trials that support the use of the cooked dish as such, or as any kind of medicine, but its devotees swear by its curative qualities. Pokeweed remains a popular folk medicine, but it hasn't been widely studied, so its healing properties remain, officially, purported.

This isn't food that's cooked as a dare or to be showy, like say, Japanese fugu, one of the world's most poisonous fish. According to Nicole Taylor, chef and author of The Up South Cookbook, poke sallet is a stretch food, and it happened to be the first fresh vegetable to rise from the ground in the earliest days of spring. "When you look at foraging, that's only what they call it now. People who were poor and people who were formerly enslaved—they had to figure out what to cook, and what to eat. You can trace different wild foods back to those folks. People who are looking for food to get by are more likely to eat poke sallet than someone who had means to eat other things."

Though mostly obscure to the mainstream, poke sallet, which is sometimes referenced as “polk salad” or “poke salet,” has occasionally dipped its toe into the pop culture pool. Most notably, in the lyrics of “Polk Salad Annie,” by Tony Joe White, released in 1968: “Everyday for supper time / she'd go down by the truck patch / And pick her a mess of polk salad / and carry it home in a tow sack.” The song about a rural Southern girl and her family peaked at Number 8 on the Billboard Top 100 in 1969, and was later remade by Elvis in 1970, and put into regular rotation at his live shows. Country legend Dolly Parton even mentioned in her memoir that she would use crushed poke berries for lipstick as an adolescent, since her parents forbade her from wearing makeup.

Handling pokeweed is no joke. Twitty remembers messing with poke berries as a youngster, and the aching in his juice-stained hands that ensued. Using pokeweed in the kitchen requires caution—it can easily get you sick, with symptoms like vomiting, diarrhea, convulsions, and rapid heartbeat . Twitty says everyone he’s met with a connection to poke sallet says the same exact thing about it: “It will clean you out from the top of your head to the bottom of your feet.”

Yet the threat that pokeweed consumption can cause death appears to be rare. New Hampshire’s recently retired state medical examiner, Dr. Thomas Andrew, told the Concord Monitor of only one deadly incident occurring during his 20-year career. A young landscaper supposedly took a bite of raw pokeweed, mistaking it for a wild parsnip, and died 45 minutes later. One passionate pokeweed detractor, Jean Weese, a professor and food safety specialist at Auburn University, cautions strongly against consuming any amount of pokeweed, cooked or uncooked. Over email, she said she hasn’t heard of anyone dying from ingesting it, but she’s received many messages over the years from people claiming serious illness. 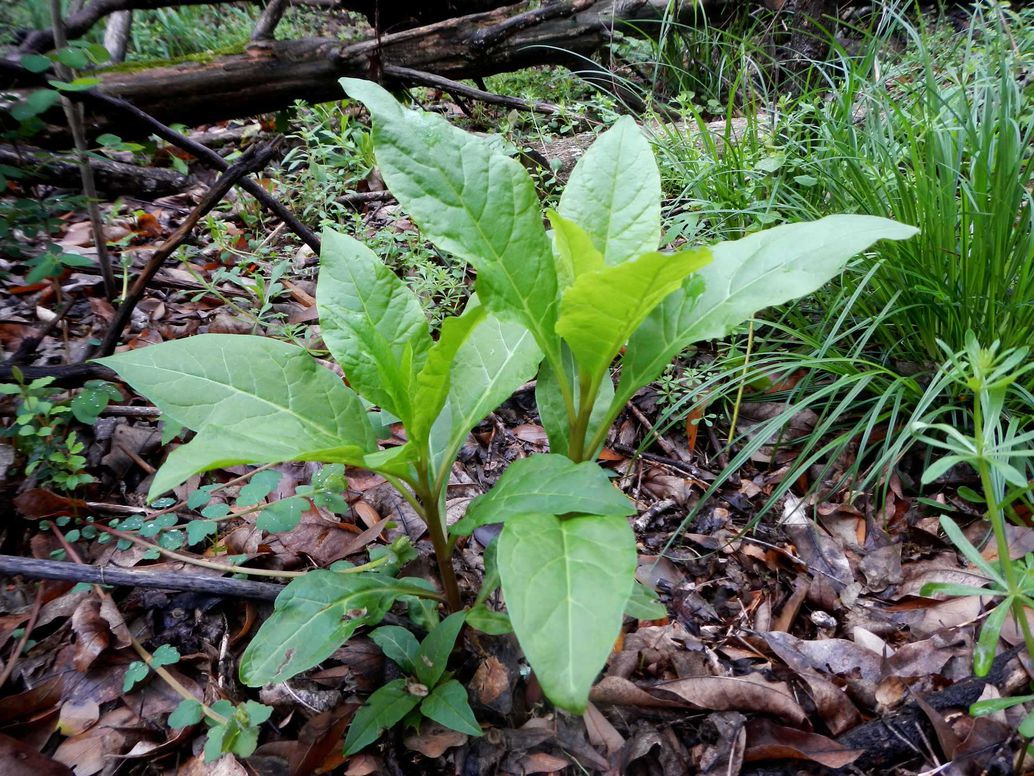 Poke weed is prime for eating when it's young and green, before it's sprouted its noxious, calling-card berries and magenta stems. Photo by Mike Gras.

Foraging's resurgence, and popularity with a set that may enjoy, say, kombucha on tap and artisanal poutine, means poke sallet is being introduced to a new cohort of eaters—who may have little to no connection to the dish's history as a survival food. In New York City, you can even learn to track down pokeweed in its prime (when it's young and green, before it sprouts its noxious, calling-card berries and magenta stems) with a trained expert like Leda Meredith, author of "The Forager's Feast: How to Identify, Gather, and Prepare Wild Edibles."

Even so, it’s scarcely found on restaurant menus across the U.S., a contrast to other co-opted survival foods like okra, polenta, and grits that now proliferate on menus hawking “elevated southern fare.” Though people have been eating meticulously prepared pokeweed for centuries in the U.S. (and even longer in Africa, where the Phytolacca species is also native), the liability of accidentally poisoning a patron is not a risk many chefs are likely to take, to speak nothing of the labor-intensive task of gathering and processing the leaves.

But such chefs do exist. There are a few exceptions who delight in the greens, with their subtle, hard-to-pin-down, vaguely asparagus-meets-spinach flavor, and they serve it on their menus as both a means to educate people about regional foodways and delicious vegetable in its own right. There’s Winston Blick, a Baltimore-area chef who played around with poke sallet on the menu at his now shuttered restaurant, Clementine (according to City Paper ), and Chef-owner Clark Barlowe, of Heirloom Restaurant in Charlotte, NC, who grew up eating the dish. It’s appeared on his all-local, Appalachian-only menu in many iterations over the years—blanched with popped sorghum or black walnuts and peanuts, grilled, and dressed with a house-made vinegar.

Sheri Castle, a Chapel Hill-based produce expert, said she wouldn’t be surprised to hear of finding pokeweed at a place like the Union Square Farmers Market, but could only list one chef she knew of (Barlowe) who cooks with it. Taylor said it’s definitely not something she’d expect to see at a farmers market, and laughed when asked about who might be eating it these days, saying, “I think people who are eating it now are definitely not young people.” At the many poke sallet–themed festivals that take place across the region each year (like the Harlan County Poke Sallet Festival in Kentucky), you’d be hard pressed to find a plate of the mess. Poke sallet is merely a totem.

Will pokeweed soon find itself hailed as a beloved “it-green”? Probably not. But it’s not so far-fetched to think that on my mom’s next early spring visit, she might be able to dine on her favorite dish without having to gather the poke leaves and prepare them herself. Like Castle told me, “If you want to save a food, you have to eat it. I really believe that. If the last person who ever has a taste memory of something is gone, then we have lost our baseline.”