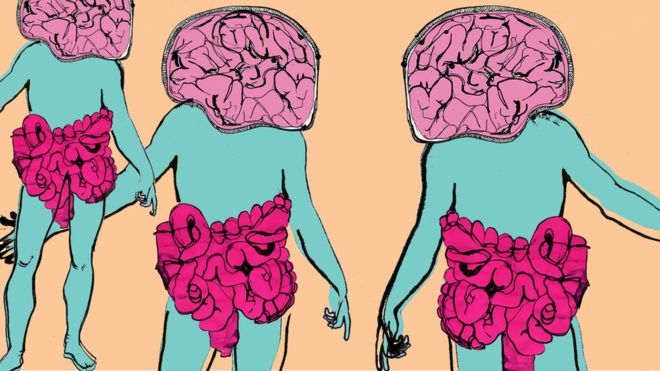 If anything makes us human it's our minds, thoughts and emotions.

And yet a controversial new concept is emerging that claims gut bacteria are an invisible hand altering our brains.

Science is piecing together how the trillions of microbes that live on and in all of us - our microbiome - affect our physical health.

But even conditions including depression, autism and neurodegenerative disease are now being linked to these tiny creatures.

We've known for centuries that how we feel affects our gut - just think what happens before an exam or a job interview - but now it is being seen as a two-way street.

Groups of researchers believe they are on the cusp of a revolution that uses "mood microbes" or "psychobiotics" to improve mental health.

The study that ignited the whole concept took place at Kyushu University in Japan.

The researchers showed that "germ-free" mice - those that never came into contact with microbes - pumped out twice the amount of stress hormone when distressed than normal mice.

The animals were identical except for their microbes. It was a strong hint that the difference was a result of their micro-organisms.

"We all go back to that first paper for the first wave of neuroscientists considering microbes," says Dr Jane Foster, a neuropsychiatrist at McMaster University in Canada.

"That really was very powerful for those of us who were studying depression and anxiety."

It was the first hint of microbial medicine in mental health.

How could bacteria be altering the brain? 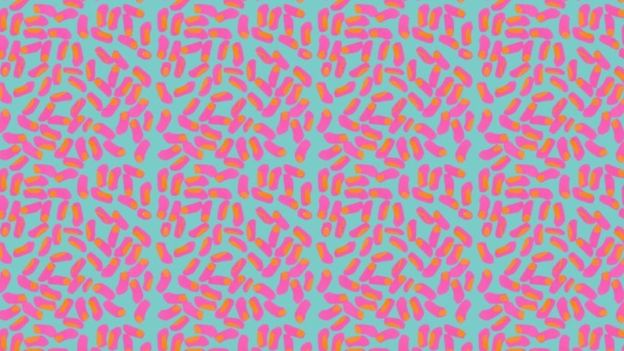 The brain is the most complex object in the known universe so how could it be reacting to bacteria in the gut?

There is now a rich vein of research linking germ-free mice with changes in behaviour and even the structure of the brain.

But their completely sterile upbringing is nothing like the real world. We're constantly coming into contact with microbes in our environment, none of us are germ-free.

At Cork University Hospital, Prof. Ted Dinan is trying to uncover what happens to the microbiome in his depressed patients.

A good rule of thumb is a healthy microbiome is a diverse microbiome, containing a wide variety of different species living all over our bodies.

Prof. Dinan says: "If you compare somebody who is clinically depressed with someone who is healthy, there is a narrowing in the diversity of the microbiota.

"I'm not suggesting it is the sole cause of depression, but I do believe for many individuals it does play a role in the genesis of depression."

And he argues some lifestyles that weaken our gut bacteria, such as a diet low in fibre, can make us more vulnerable. 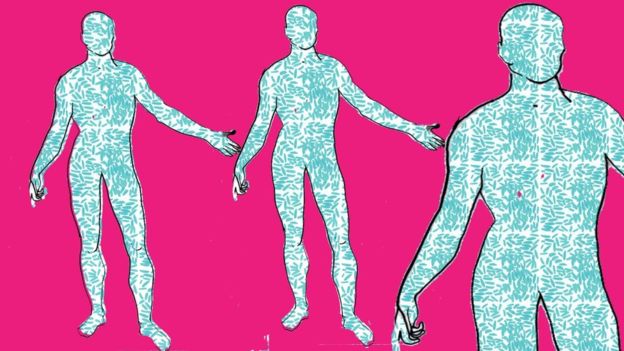 It's an intriguing concept - that an imbalance in the gut microbiome could be involved in depression.

So scientists at the APC Microbiome centre, at University College Cork, started transplanting the microbiome from depressed patients to animals. It's known in the biz as a trans-poo-sion.

Prof. John Cryan told the BBC: "We were very surprised that you could, by just taking microbiome samples, reproduce many of the features of a depressed individual in a rat."

This included anhedonia - the way depression can lead to people losing interest in what they normally find pleasurable.

For the rats, that was sugary water they could not get enough of, yet "when they were given the microbiome from a depressed individual, they no longer cared", says Prof. Cryan.

Similar evidence - linking the microbiome, the gut and the brain - is emerging in Parkinson's disease.

It is clearly a brain disorder. Patients lose control over their muscles as brain cells die and it leads to a characteristic tremor.

But Prof. Sarkis Mazmanian, a medical microbiologist from Caltech, is building the case that gut bacteria are involved.

"Classical neuroscientists would find this as heresy to think you can understand events in the brain by researching the gut," he says.

He has found "very powerful" differences between the microbiomes of people with Parkinson's and those without the disease.

Studies in animals, genetically hardwired to develop Parkinson's, show gut bacteria were necessary for the disease to emerge.

And when stool was transplanted from Parkinson's patients to those mice, they developed "much worse" symptoms than using faeces sourced from a healthy individual.

"We're very excited about this because it allows us to target the microbiome as an avenue for new therapies." 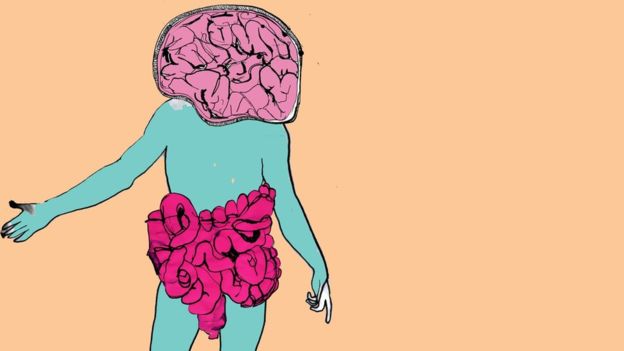 The evidence linking the microbiome and the brain is as fascinating as it is early.

But the pioneers of this field see an exciting prospect on the horizon - a whole new way of influencing our health and wellbeing.

If microbes do influence our brains then maybe we can change our microbes for the better.

Can altering the bacteria in Parkinson's patients' guts change the course of their disease?

There is talk of psychiatrists prescribing mood microbes or psychobiotics - effectively a probiotic cocktail of healthy bacteria - to boost our mental health.

Dr Kirsten Tillisch, at University of California, Los Angeles, told me: "If we change the bacteria can we change the way we respond?

But she says we need far bigger studies that really probe what species, and even sub-species, of bacteria may be exerting an effect on the brain and what products they are making in the gut.

Dr Tillisch said: "There's clearly connections here, I think our enthusiasm and our excitement is there because we haven't had great treatments.

"It's very exciting to think there's a whole new pathway that we can study and we can look and we can help people, maybe even prevent disease."

And that's the powerful idea here.

The microbiome - our second genome - is opening up an entirely new way of doing medicine and its role is being investigated in nearly every disease you can imagine including allergies, cancer and obesity.

I've been struck by how malleable the second genome is and how that is in such stark contrast to our own DNA.

The food we eat, the pets we have, the drugs we take, how we're born… all alter our microbial inhabitants.

And if we're doing that unwittingly, imagine the potential of being able to change our microbiome for the better.

Prof. Cryan said: "I predict in the next five years when you go to your doctor for your cholesterol testing etc, you'll also get your microbiome assessed.

"The microbiome is the fundamental future of personalised medicine."