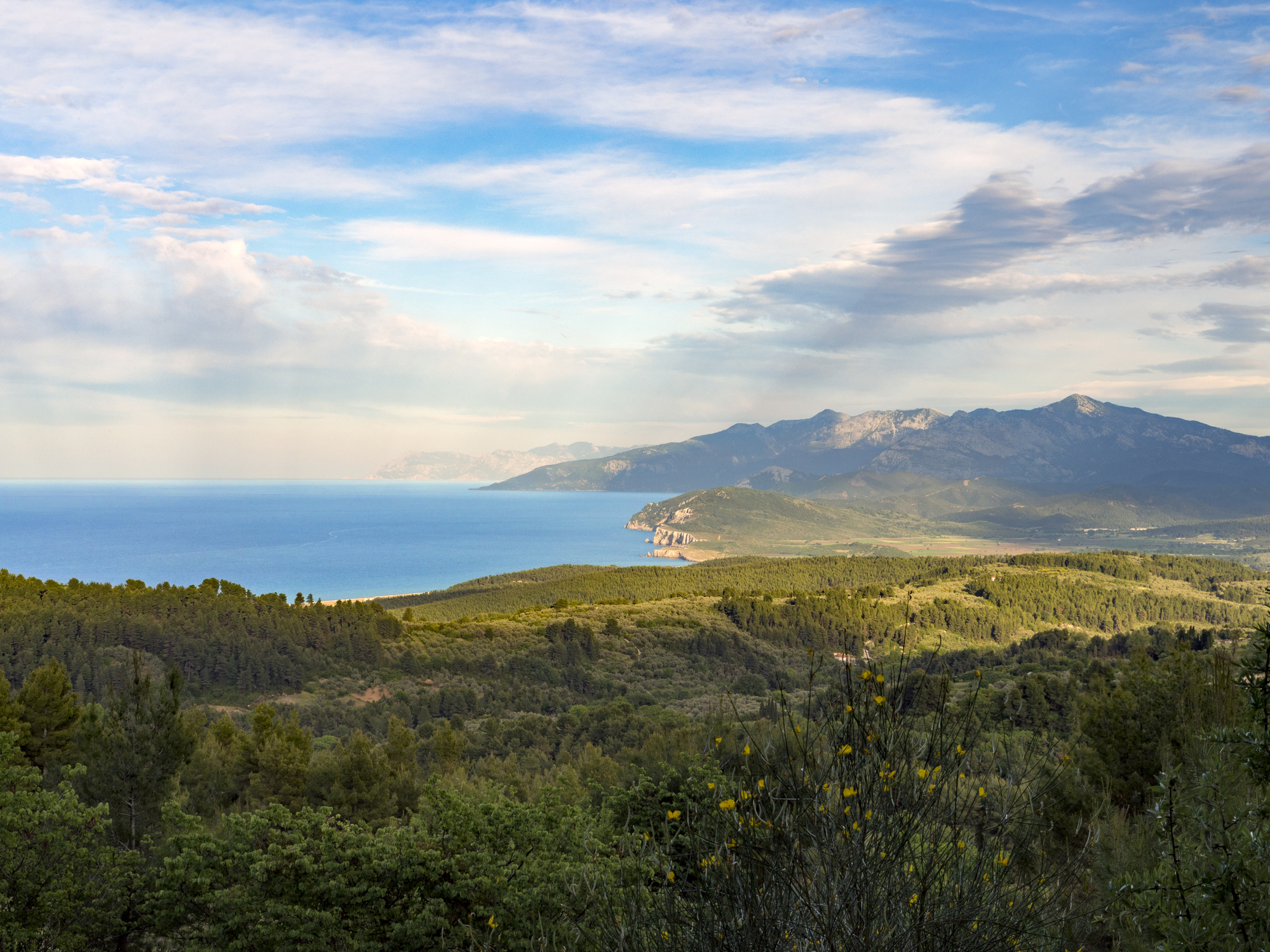 Greeks are fabulous at cursing. The innovative insults roll off the tongue as they liken your grandmother’s private parts to a coin-slot receiver, curse the Antichrist, your house, or your bottom. Though usually hissed or shouted, whistled insults don’t disappoint, either. On a recent visit to Antia, a tiny village folded into the green mountains of Evia, Greece’s second largest island, we cajoled Mrs. Katerina, a local octogenarian, to whistle us a blaspheme. “Go to hell,” she whistled, the breathy syllables sounding remarkably bird-like. She leaned back in her chair and dissolved into peals of laughter.

Antia is home to the last whistlers of Greece. Sfyria, as the whistling language is called in Greek — it comes from the Greek word sfyrizo, to whistle — is not technically a language; linguists refer to it as a speech registrar, like shouting or whispering. It’s the same as modern Greek — the grammar, vocabulary, and sentence structure all remain intact — but the sounds come out in high-pitched musical notes. Each letter of the alphabet is individually whistled (alpha, beta, gamma), and strung together to create an ariose warble.

To the untrained ear, it sounds like a completely different language, and because it’s likely you’ve never heard anyone whistle “come here, man, you owe me some money,” the whole auditory experience is that much more foreign. Even native Greek speakers are unable to understand sfyria, and for an English-speaker, sfyria simply sounds like melodic tweeting. But for the villagers of Antia, it’s been a useful form of communication for generations.

The biggest benefit of whistling is its shrillness. Whistling can travel up to four kilometers — 10 times further than shouting — which means it’s particularly useful for agricultural villages, where people are working in the fields across long distances. “I like to say sfyria was like an email, or a message,” explained Yannis, a 45-year-old former taxi driver who grew up in Antia and now lives in Karistos, a larger beachside town in Evia. “It was the SMS of the time.” Yannis was taught to whistle by his father; he would practice for hours every day until his larynx became swollen and he would get headaches.

“Whistling is really good to attract attention because the frequency used is best perceived by the human auditory system, both statically and dynamically,” Julien Meyer, a linguist with France's National Center for Scientific Research explained to The Outline by phone. “It’s very sharp for the brain and very attention-catching, and you can develop it in different ways.”

In Antia, whistling is utilized for both long- and short-range communication, but it’s primarily used for casual communication. “We use it at the market, for directions, for transfers,” explained Mrs. Katerina. She might whistle with her neighbor about how much he’s selling a litre of tsipouro, a traditional liquor made from grapes, or to invite a friend over for a coffee. Strong teeth make for the best whistlers, which is problematic for the aging population of Antia. “I used to whistle like a bell!” Mrs. Katerina told us. Like other older residents, she’s a bit shy and embarrassed to whistle now, though even with only her dentures, her whistled greeting pierces our ears. (Her grandfather taught her how to whistle when she was young; she practiced with the animals out in the pastures.)

Although some Antians are working hard to preserve their language by teaching informal classes, petitioning the municipal government to open a school, and inviting researchers to come record the language — the charge is led by Panagiotis Tzanvaris, who created the Cultural Association of Antia — time is against them. Sfyria is considered an endangered language; the Linguistic Society of America (LSA) defines an endangered language as one that is “likely to become extinct in the future.” According to the LSA, 80 percent of the world’s languages may die out within the next hundred years.

Today, there are only 37 residents left in the village. The dead have been buried next to a small church down the road, and almost all of the younger generation has left to work in the larger towns of Evia, or further away in Athens. There are perhaps twenty village dwellers who can still whistle, but the sounds that used to pierce the quiet landscape have dwindled to just a few sharp exhalations. When we visit — and to get to Antia, you must drive from Athens to the port of Rafina, take an hour long ferry, and drive for another hour through switchbacks on mountains dotted with giant, white windmills — it’s the middle of January, and the village is even more quiet than usual.

“Whistled registrars have survived only in isolated places in the world,” Meyer said. The emergence of whistling communication is still a puzzle for linguists, but more worrisome is the rate at which they are dying out. Modernity, it seems, is the main culprit.

Language, in whatever form it takes, is inherently social. The problem is not only if the speakers are dying, or aging, or their teeth are falling out — it’s when the social structure of their life changes. When the telephone finally arrived in Antia in the 1960s, it altered communication between neighbors. Instead of whistling an invitation for coffee, one could pick up the phone. As jobs became more industrialized, most of the villagers left to seek employment elsewhere, where the social or environmental structure of their new communities did not allow for whistling. The village shrunk, and so did the continued usage of sfyria.

There are over 70 whistled registrars across the world in various stages of existence and near-extinction. Whistling communities are often found in mountains, like the Moroccan Atlas Mountains or the Himalayas, but also in its crevices, like the Omo Valley in Ethiopia. Whistling cuts through the dense, wet foliage of jungles, and there are records of whistlers in Brazil and Myanmar. Perhaps the best known form of whistling is found in La Gomera, in the Spanish Canary Islands; silbo, as the registrar is referred to in Spanish, was granted a Masterpiece of the Oral and Intangible History status by the United Nations Educational, Scientific, and Cultural Organization (UNESCO) in 2009. The so-called “bird language” of the Turkish Kuskoy villagers has also been awarded a Masterpiece status.

“UNESCO Intangible Heritage Programme inscribes elements of intangible heritage at the request of countries,” Roni Amelan, English editor of UNESCO’s press service told The Outline by email. He confirmed that UNESCO has never received a request from the Greek government. In Antia, however, there is some interest by locals to petition the municipal and central government into proposing sfyria to UNESCO; the Masterpiece status can help revive — or at least pique external interest in — a dying language.

Whistling has been around for thousands of years, with one of the earliest records coming from the Greek traveler Herodotus. Ever the journalist, Herodotus breathlessly noted down the peculiar communication patterns of Ethiopian troglodytes whose “speech is like no other in the world: it is like the squeaking of bats.” Several ancient Chinese texts also refer to whistling, both as a form of music and long-distance communication. According to Meyer, the first “undisputable historical proof” of a whistled registrar is a written testimony by two Franciscan priests who accompanied French mercenary Jean de Béthencourt as he conquered the Canary Islands under the command of Spanish Queen Isabel. Six hundred years before UNESCO, the priests described silbo speakers as those who speak “with two lips as if they had no tongue.”

In the modern, western world, whistling is common in music, or the mindless humming that so easily accompanies showering or dull work. As a tool of communication, however, its use is more limited: in sports, with pets, or, if you are an impressionable first-time visitor to New York, hailing a taxi. The attention-grabbing trill of whistling has a sexual component as well; that two-toned wolf-whistle is an uncomfortable assault on the ears for many women. In non-whistling societies, the whistle is separate from any linguistic context and becomes just a sound with a specific cultural reference. But in whistling communities, it operates with all the complexities of a language, and so those connotations don’t exist — there are no wolf-whistles or taxis in Antia.

Among several whistling groups in Southeast Asia’s Golden Triangle, courtship and seduction are interwoven into the registrar. This isn’t the norm, though: While whistling can be whispered and used for intimate conversations, in most cultures it happens outdoors — and it’s very loud. In small communities, where everyone is whistling to each other outside, that means that “there are no secrets,” Antia whistler Yannis told us with a smile. Antia is a traditionally Greek Orthodox village, and very conservative. Dating and flirting, we’re told, were not on whistled display.

To the non-whistler, it can seem like whistling wouldn’t lend itself well to emotion, as it sounds more static. “There is no feeling or emotion in whistling like there is in whistled speech,” Yannis said with a shrug. Meyer, however, explained that in some cultures, emotion “might be encoded in the pitch or in the rhythm,” like in La Gomera, where sibo whistlers lower their frequency to announce the death of someone. While frequency might not be used as much to convey emotion in sfyria, it’s the actual use of the language that remains heart-tugging for its speakers.

“I feel my own history and ‘villageness’ — in my own characterization of that, no matter the stereotype in Greece of a ‘villager,’” Mrs. Katerina said with a smile. Her porch overlooked the mountains of Evia. The sky was travel-advertisement blue. A plate of homemade melomakarona sat next to the Greek coffees she made us, warmed by the sun. “I love to whistle to my friends and family,” she continued. “I feel the connection.” A neighbor happened to be walking by, as she curled her tongue, pressed it against her teeth, and flared her upper lip. A sharp tweet came out. Hello, how are you!

Sarah Souli is a freelance journalist based in Athens, after several years in Tunisia. She writes for Vice, Al Jazeera, The Economist, Quartz, and more.