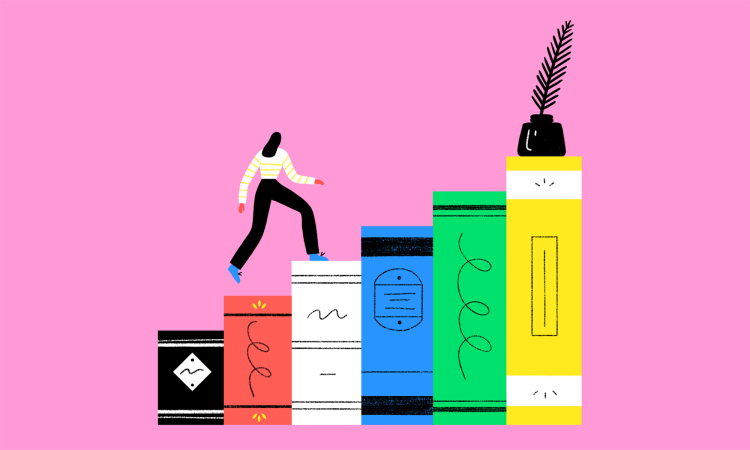 “Write something good, and feel good about writing it.”

That sentence is from award-winning writer Jacqueline Woodson — she released Red at the Bone in 2019, a novel for adults — in response to the question “What’s the goal of writing when you’re 15?” (Side note: I, the interviewer, did not pose that query; she did. Yep, Woodson is the kind of intimidating and articulate person who can come up with thoughtful questions even during an interview.)

That sentence is great advice for writers of any age. And so, just because I can, I will repeat it: “Write something good, and feel good about writing it.”

Woodson and I are talking about writing because I’m a fan of hers and because I’m a mentor in a writing program for high-schoolers in New York City (Girls Write Now). I wanted to hear what insights and inspiration she had to offer those who aspire to do what she does. Once upon a time, she was a girl with a passion for words — “from the gate, I was like, ‘I want to be a writer — I want to write everything: poetry and short stories and fiction and …’” She’s gone on to write more than 30 books — including Miracle’s Boys, Brown Girl Dreaming and After Tupac and D Foster — that span all those categories and then some. Decades later, she still loves to write and re-write (more on the latter below).

Here’s what she had to say to aspiring writers:

Do you know lots of impressive words? Good — but try to keep them to yourself

“You don’t need to have a great vocabulary. What you need to have is a creative way of using the words you have. I think sometimes it is detrimental to writers to have too much of a vocabulary because they just rely on the word that they know how to define and they end up breaking the first rule of writing: Show, don’t tell.”

No one else sees the world quite the same way you do, so share your unique perspective

“Writing is about narrative language and creative language and being able to get a point across in a way that is not ordinary. More than having a large vocabulary, one needs a large vision and be able to see the world in a different way than other people see it.”

Look at picture books, even if you think you’re too old for them

“Young writers can learn so much from reading picture books and really engaging in the text and how the language is laid on the page. With picture books, [writers] are working with a reader who has a very short attention span and you have to get them from line one and hold them to page 32. That’s a challenge, but it’s also a challenge that’s not going to be intimidating for a young writer. It also allows them to experiment with tone and form, especially poetic form, because picture books are intentional, the line breaks are intentional, and each line is laying down an image.”

Woodson recommends checking out any of the illustrated books that have received the Caldecott Medal or the Coretta Scott King Book Award.

“Writing is visceral. If you write something down and don’t feel some kind of way, then it’s not working. It’s not doing what you wanted to do.”

If it’s possible, set limits on the initial feedback you receive

“When I first write something, I show it to three people I trust. I tell them: ‘Tell me every single thing you love about it.’ That’s all I want to hear because it’s embryonic. It’s so fragile at that point because it’s so new that I’m not ready for questions, I’m not ready for it to be evaluated in any way. I just want to know what you love, because that’s going to make me excited to go back and write more of it.”

Seek out books that reflect you and your experience

“Dr. Rudine Sims Bishop talks about the importance of kids having both mirrors and windows in their fiction. (editor’s note: Bishop is referring to kids having the chance to read books that reflect them and their lives and books that give them portals onto different kinds of lives.) I think especially in our culture kids get a lot of books by white writers, no matter their color, so they can’t even imagine themselves as an Asian girl, a black girl, someone who is indigenous [and] being able to have a narrative. It’s hard to have a writer believe, ‘Yeah, I have license to tell a story without getting in trouble.’ To see parts of her narrative in cultures as close to hers as possible is helpful.”

If you can’t find writing that mirrors you, take it as your chance to fill in the gap

“As a kid, you have a right to be in the world fully and you have a right to see representations of yourself wherever you go. And if you don’t, write your way out. (editor’s note: like Alexander Hamilton.) Figure out why that is so, and rather than fixating on the dilemma of it, challenge it. Write the challenge, and that’s where your writing’s going to break through and create something new.”

Being a writer means being a re-writer

“You’re not going to like everything. There are some things that are going to be painful and you don’t want to do them, but the end result is going to be something that is better. I love re-writing now, but I’m old. I love it because I know when I finish re-writing, it’s going to be better than it was when I first wrote it.”

Get ready for your stories, articles, poems and essays to unravel — all of them

“It happens with every single piece. Your writing gets to this point, and it’s so fabulous and you love it. And then it falls apart. That’s the point where you have to start scaffolding it and building it and trying to figure out what is this piece trying to say and how is it trying to say it. A lot of people stop when the piece falls apart and think they’re going to start another one and they’re all going to fall apart.”

What you need to do at this moment: Don’t stop.

“It’s going to be the difference between finishing something and having a whole bunch of half-finished things in your drawer. For people who are starting out writing, know that your piece of writing is going to fall apart and it’s going to get really hard. But it’s the best place to be, because now your work is ahead of you. And you know what you have to do to make it better.”

Don’t fixate on getting published.

“Whenever kids start asking me about their stuff getting published, I’m like, ‘That’s not what you should worry about. You should worry about writing the best piece that you possibly can.’ Writing is such a process. It’s an ongoing process, and you don’t write something in September and have it published by December. It takes much longer. If you really want to invest in the world of writing, you have to invest time and labor and faith in it.”