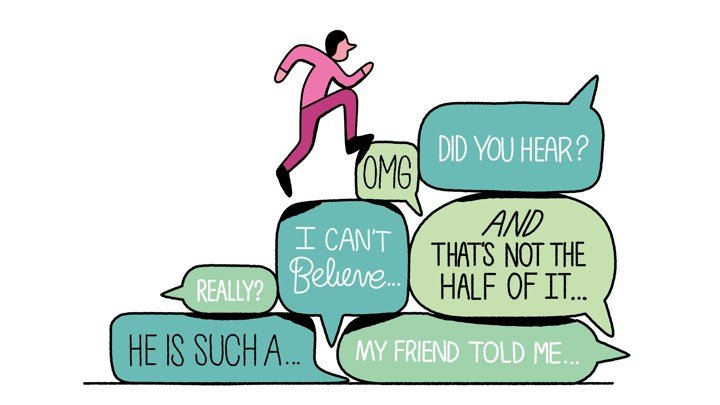 Word on the street is that gossip is the worst. An Ann Landers advice column once characterized it as “the faceless demon that breaks hearts and ruins careers.” The Talmud describes it as a “three-pronged tongue” that kills three people: the teller, the listener, and the person being gossiped about. And Blaise Pascal observed, not unreasonably, that “if people really knew what others said about them, there would not be four friends left in the world.” Convincing as these indictments seem, however, a significant body of research suggests that gossip may in fact be healthy.

It’s a good thing, too, since gossip is pretty pervasive. Children tend to be seasoned gossips by the age of 5, [1] and gossip as most researchers understand it—talk between at least two people about absent others—accounts for about two-thirds of conversation. [2] In the 1980s, the journalist Blythe Holbrooke took a stab at bringing rigor to the subject, tongue firmly in cheek, by positing the Law of Inverse Accuracy: C = ( TI ) ^v – t , in which the likelihood of gossip being circulated ( C ) equals its timeliness ( T ) times its interest ( I ) to the power of its unverifiability ( v ) minus the reluctance someone might feel about repeating it out of taste ( t ). [3]

Despite gossip’s dodgy reputation, a surprisingly small share of it—as little as 3 to 4 percent—is actually malicious. [4] And even that portion can bring people together. Researchers at the University of Texas and the University of Oklahoma found that if two people share negative feelings about a third person, they are likely to feel closer to each other than they would if they both felt positively about him or her. [5]

Gossip may even make us better people. A team of Dutch researchers reported that hearing gossip about others made research subjects more reflective; positive gossip inspired self-improvement efforts, and negative gossip made people prouder of themselves. [6] In another study, the worse participants felt upon hearing a piece of negative gossip, the more likely they were to say they had learned a lesson from it. [7] Negative gossip can also have a prosocial effect on those who are gossiped about. Researchers at Stanford and UC Berkeley found that once people were ostracized from a group due to reputed selfishness, they reformed their ways in an attempt to regain the approval of the people they had alienated. [8]

By far the most positive assessment of gossip, though, comes courtesy of the anthropologist and evolutionary psychologist Robin Dunbar. Once upon a time, in Dunbar’s account, our primate ancestors bonded through grooming, their mutual back-scratching ensuring mutual self-defense in the event of attack by predators. But as hominids grew more intelligent and more social, their groups became too large to unite by grooming alone. That’s where language—and gossip, broadly defined—stepped in. [9] Dunbar argues that idle chatter with and about others gave early humans a sense of shared identity and helped them grow more aware of their environment, thus incubating the complex higher functioning that would ultimately yield such glories of civilization as the Talmud, Pascal, and Ann Landers.

So the next time you’re tempted to dish the dirt, fear not—you may actually be promoting cooperation, boosting others’ self-esteem, and performing the essential task of the human family. That’s what I heard, anyway.