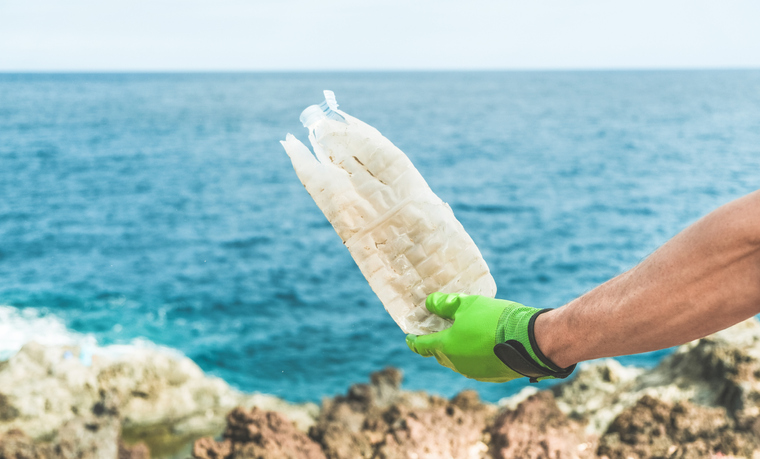 Mark Browne had a suspicion. He hoped the samples of dried blood taken from a blue mussel and placed under a special microscope would tell him if he was correct. As a fuzzy, three-dimensional image of the mussel’s blood cells appeared, there they were, right in the middle—tiny specks of plastic.

Whereas photos of sea turtles eating plastic bags have become the poster child of the environmental harm wrought by humanity’s plastic waste, research like Browne’s illustrates the scope of the problem is far larger than the trash we can see. Tiny pieces of degraded plastic, synthetic fibers and plastic beads, collectively called microplastics, have turned up in every corner of the planet—from Florida beach sands to Arctic sea ice, from farm fields to urban air.

Their size—from about five millimeters, or the size of a grain of rice, down to microscopic—means they can be ingested by a wide range of creatures, from the plankton that form the basis of the marine food chain to humans. As Browne’s 2008 study was one of the first to demonstrate, those plastic particles don’t always pass harmlessly through the body. The finding “was one of those sort of bittersweet moments,” the ecotoxicologist at the University of New South Wales in Sydney says. “You’re pleased that some prediction you’ve made has come true—but then you’re devastated” because of the potentially profound ecological implications.

Ingested microplastic particles can physically damage organs and leach hazardous chemicals—from the hormone-disrupting bisphenol A (BPA) to pesticides—that can compromise immune function and stymie growth and reproduction. Both microplastics and these chemicals may accumulate up the food chain, potentially impacting whole ecosystems, including the health of soils in which we grow our food. Microplastics in the water we drink and the air we breathe can also hit humans directly.

Browne is one of dozens of scientists trying to sort out exactly what this widespread, motley assortment of microplastics pollution might be doing to animals and ecosystems. Tantalizing evidence is emerging, from the impaired reproduction of fish to altered soil microbe communities. As researchers accumulate more data, “we start realizing we’re just at the tip of the iceberg with the problem,” Browne says.

A Threat to Organs and Bloodstream

When Browne experimented with blue mussels back in 2008, many researchers thought animals would just excrete any microplastics they ate, like “unnatural fiber,” as Browne called it—but he wasn’t so sure. He tested the idea by placing mussels in water tanks spiked with fluorescent-tagged microplastic particles smaller than a human red blood cell, then moved them into clean water. For six weeks he harvested the shellfish to see if they had cleared the microplastics. “We actually ran out of mussels,” Browne says. The particles “were still in them at the end of those trials.”

The mere presence of microplastics in fish, earthworms and other species is unsettling, but the real harm is done if microplastics linger—especially if they move out of the gut and into the bloodstream and other organs. Scientists including Browne have observed signs of physical damage, such as inflammation, caused by particles jabbing and rubbing against organ walls. Researchers have also found signs ingested microplastics can leach hazardous chemicals, both those added to polymers during production and environmental pollutants like pesticides that are attracted to the surface of plastic, leading to health effects such as liver damage. Marco Vighi, an ecotoxicologist at the IMDEA Water Institute in Spain, is one of several researchers running tests to see what types of pollutants different polymers pick up and whether they are released into the freshwater and terrestrial animals that eat them. The amount of microplastics in lakes and soils could rival the more than 15 trillion tons of particles thought to be floating in the ocean’s surface alone.

Credit: Amanda Montañez; Source: “Sources, Fate and Effects of Microplastics in the Marine Environment: A Global Assessment,” edited by Peter J. Kershaw, (IMO/FAO/UNESCO-IOC/UNIDO/WMO/IAEA/UN/UNEP/UNDP Joint Group of Experts on the Scientific Aspects of Marine Environmental Protection), GESAMP Reports and Studies, No. 90; 2015.

What matters most is whether these physical and chemical impacts ultimately affect an organism’s growth, reproduction or susceptibility to illness. In a surprising study published in March 2018, not only did fish exposed to microplastics reproduce less but their offspring, who weren’t directly exposed to plastic particles, also had fewer young, suggesting the effects can linger into subsequent generations. Some organisms such as freshwater crustaceans called amphipods haven’t yet exhibited any ill effects, perhaps because they can handle natural indigestible material like bits of rock, says Martin Wagner, an ecotoxicologist at Norwegian University of Science and Technology, who studied them. And some species have shown toxic effects from microplastics exposure from certain types of plastic, but not others, says Chelsea Rochman, a microplastics researcher at the University of Toronto.

Most work on microplastic impacts has been done in the lab for short stints, with only a single type of plastic, often with larger particles than some species tend to eat, and at higher concentrations than are found in the environment. The studies “won’t tell us about long-term ecological consequences happening at low concentrations,” Wagner says. He is one of several researchers starting to bridge that gap by matching animals to the polymers and pollutants they are most likely to encounter and incorporating the intricacies of the real world where microplastics “won’t be the only stressor,” Wagner says. Microplastics could be a last straw for species subject to pressures as chemical pollutants, overfishing and climate change. “It’s just damn complicated,” Wagner says.

Messy, real-world conditions are the goal on the green lawn of a botanical garden in Frankfurt, Germany. A row of small, identical ponds stretch across the grass, exposed to the elements. Wagner spiked each one with different microplastic particles—some virgin polymers, some contaminated with pollutants—to see how freshwater insects and zooplankton fare. Although Wagner hasn’t yet observed any overt impacts, he is investigating whether certain organisms exhibit more subtle signs of harm, which could have a ripple effect throughout an ecosystem’s food web.

Such cascading impacts could happen even when individual species don’t seem to suffer. Browne’s mussels showed no short-term ill effects but he worries their accumulated microplastics could be transferred to animals that eat them. “They might not be so kind to the other organisms,” he says.

Like Wagner, Browne is venturing farther out into the real world. He has several freezers’ worth of fish and other organisms plucked from Sydney Harbor that he will examine for ingested microplastics. His team will be linking those to the routes by which microplastics might be entering the harbor and looking for signs of ecological damage such as changes in population size. The approach means animals can behave normally and are exposed to typical environmental conditions such tides and storms, as well as a host of other stressors such as changing ocean temperatures and industrial pollutants. “We want a chaotic system because if something can cause an impact in that chaotic system, above those other stresses, we know that we really, really need to be worried about it,” Browne says.

Matthias Rillig, a plant ecologist at Free University of Berlin, has shown how microplastics can affect organisms by altering their environments. In a study he co-authored, soil laden with polyester microfibers was much fluffier, retained more moisture and seemed to affect the activity of microbes that are crucial to the soil nutrient cycle. The finding is an early but concerning one, given that farmers around the world apply microfiber-rich treated sewage sludge as fertilizer to agricultural land. Rillig is also one of several scientists looking to see how microfibers in soils might be affecting crop growth.

Microplastics may threaten people more directly. A study published in April 2018 found particles and microfibers in packaged sea salt, beer, bottled water and tap water, making it virtually certain we are ingesting microplastics. In bottled beverages microplastics could be infiltrating during the bottling process; microfibers could be falling from the atmosphere into the reservoirs that supply tap water. Even for researchers steeped in the field, “it still comes as a shock,” Rochman says. “It just shows that the mismanagement of our waste is coming back to us.”

Because it is unethical to intentionally feed doses of microplastic particles to humans, some researchers, like Browne, have turned to medical studies that use particles to deliver precise amounts of drugs to specific areas of the body to get a better sense of how easily microplastics might move through humans. If particles are small enough, they might migrate through the body and potentially accumulate in places like the bloodstream. A study of hamsters injected with microplastics suggests such particles can lead to blood clots.

Humans could also be inhaling microfibers as they fall from the sky—everywhere from the heart of Paris to the remote Arctic. Small airborne particles are known to lodge deep in the lungs where they can cause various diseases, including cancer. Factory workers who handle nylon and polyester have shown evidence of lung irritation and reduced capacity (although not cancer), but they are exposed to much higher levels than the average person. Stephanie Wright, a research associate at King’s College London, is trying to better understand how much microfiber humans are actually exposed to and whether airborne microplastics might penetrate the lungs. She is also teaming up with the university’s toxicology unit to examine their lung tissue collection for signs of microfibers and related damage.

Some scientists say the focus on microplastics in humans might be missing a larger point: People are continually exposed to plastic food and beverage containers, which could be a much bigger source of at least the chemicals added to plastics such as the endocrine disruptor BPA. The potential exposure to microplastics hasn’t stopped Rochman from eating seafood, however. “To the best of my knowledge the benefits outweigh the costs,” she says. It could be that, as with many pollutants, there is a threshold beyond which microplastics become toxic to humans or other species. “We just need to try to understand what that threshold is,” she notes.

Experts say the sheer ubiquity of the contaminant combined with the harm that has already been observed is enough for humanity to start to clean up its act. “There are always questions to be answered,” Rochman says, but we have reached the point where “it’s enough information to act toward solutions.”