Please don't freeze the entire chicken like this when you store this soup. There’s a process. Jenny Huang

When it comes to colder months or hunkering down, canned food and other non-perishables are fine and all, but we’ve got two words that will absolutely change the game: Frozen. Soup.

Beyond the fact that soups are like warm hugs for your insides, freezing them allows you to transform quick-spoiling produce into a long-lasting food supply that’s easy to reheat. Just drop those savory blocks of soup-ice in a pot and let ‘em melt. Plus, cooking is an excellent way to pass the time when you can’t leave the house. Heck, get the whole family involved.

So we asked our good friends at Saveur to send us their favorite soup recipes. Now, we’re passing them on to you. 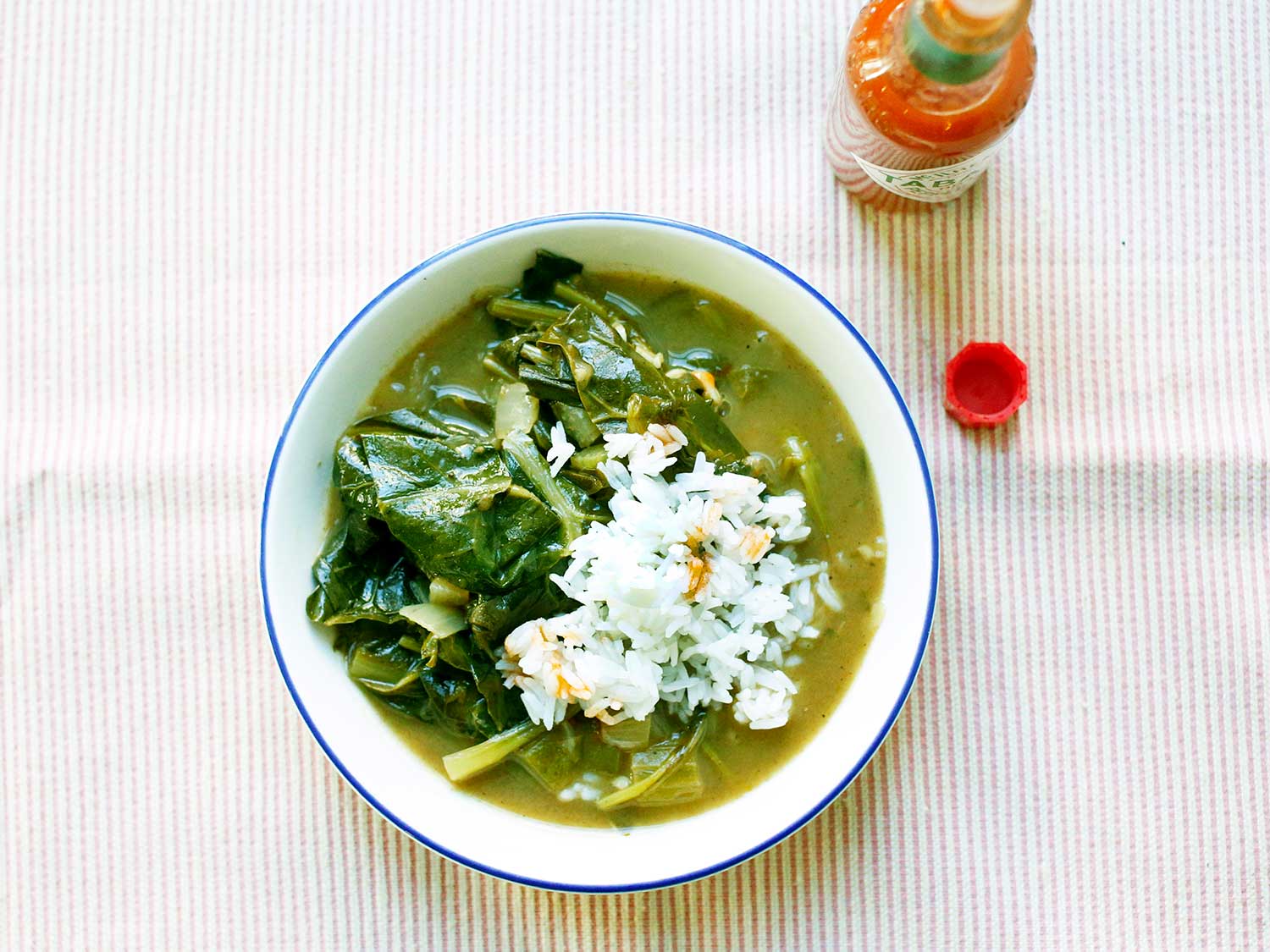 Traditionally, there’s no meat in this gumbo, but you can use meat stock if you want. Thomas Payne

A traditional dish for Louisiana’s Catholics during Lent, this meatless gumbo recipe serves 10 to 12 people. The ingredients are fairly standard, combining yellow onions, celery, a green bell pepper, and garlic with a sizeable amount of whatever leafy greens you have on hand. It’s one of Saveur food editor Kat Craddock’s favorites, and although it’s usually vegetable-only, she sometimes likes to sneak in a little andouille sausage or a smoked turkey leg. 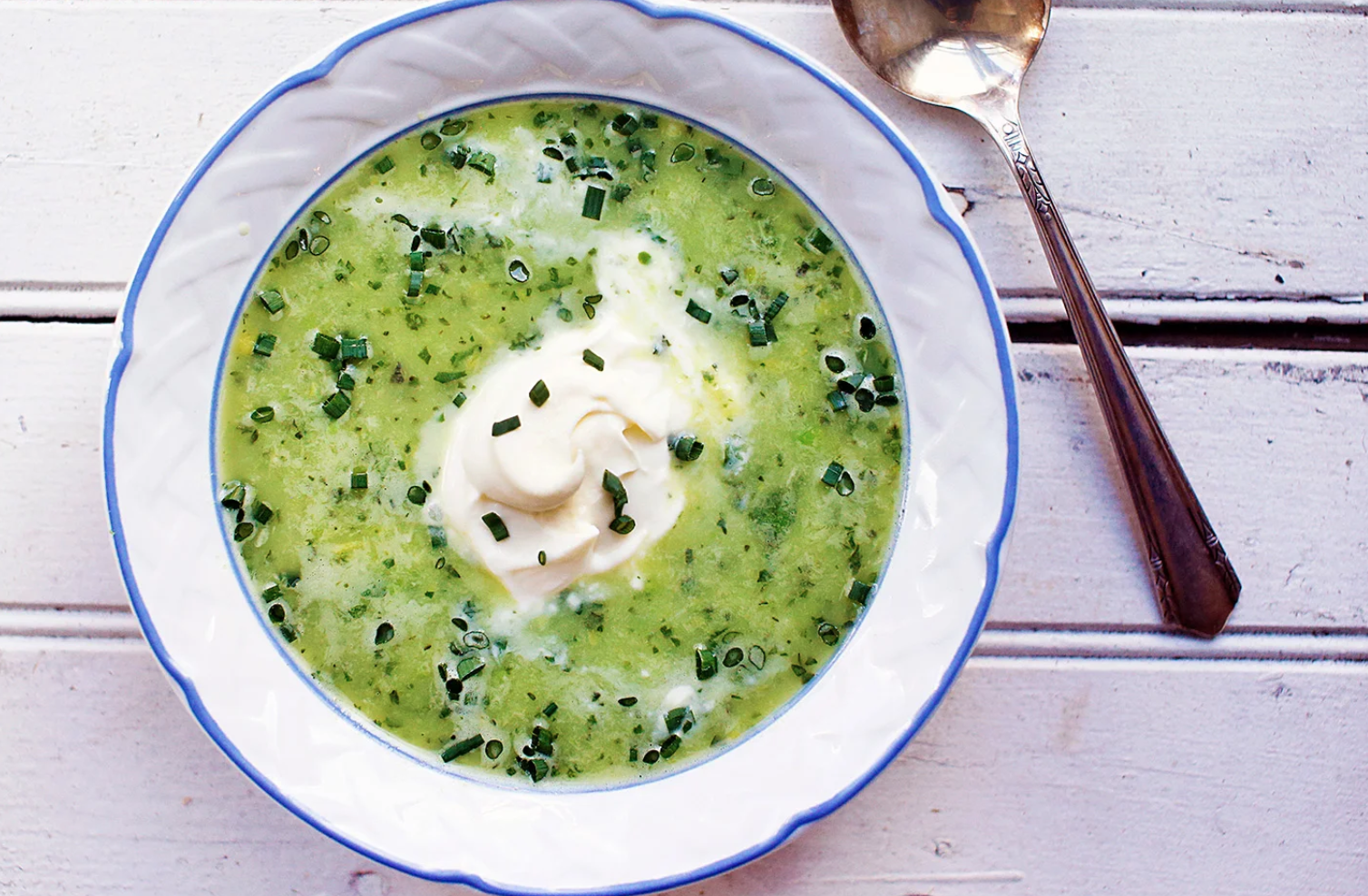 This vibrant soup is excellent served warm or chilled, but we haven’t tried it as a popsicle. Thomas Payne

This simple soup contains exactly what is advertised: peas, leeks, and herbs. There’s a little more to it than that, of course, but not much. As a bonus, if you’ve been looking for a reason to use that bag of frozen peas that’s gone untouched for ages, you can use it here. Start to finish, it’ll take about two hours to make this recipe, and you’ll need a blender. 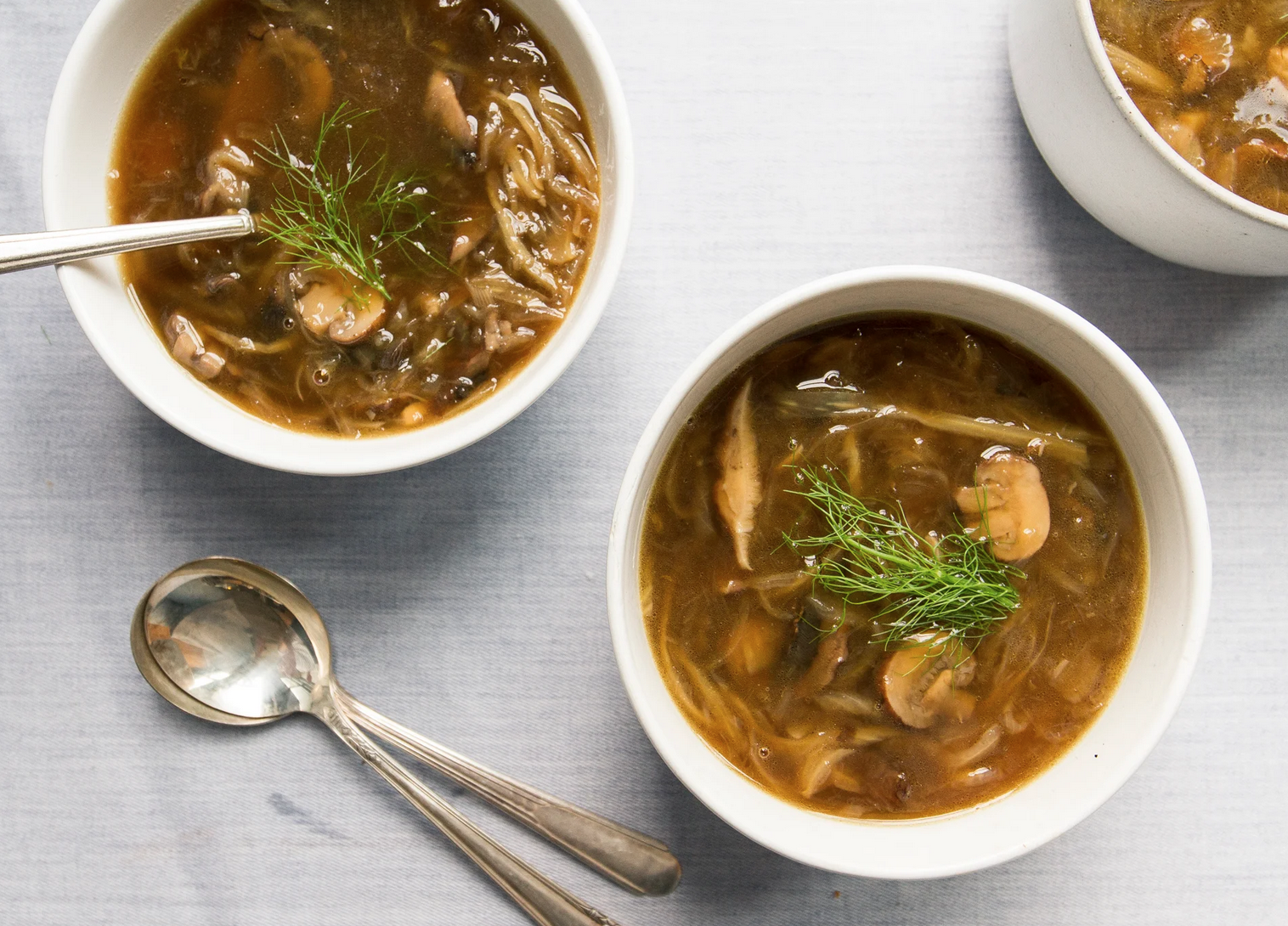 If you get bored of how this one tastes, just make it with different mushrooms. Problem solved. Farideh Sadeghin

Another straightforward recipe, this one’s for the mushroom lovers. Yeah, you can use a pound of your favorite mushrooms (cremini, shiitake, portobello, whatever), but you can also amp up that earthy flavor with 8 cups of mushroom stock. If you’d rather not, or just don’t have any on hand, you can just use beef stock. Pour a little bit of white wine in there, too, while you’re at it. 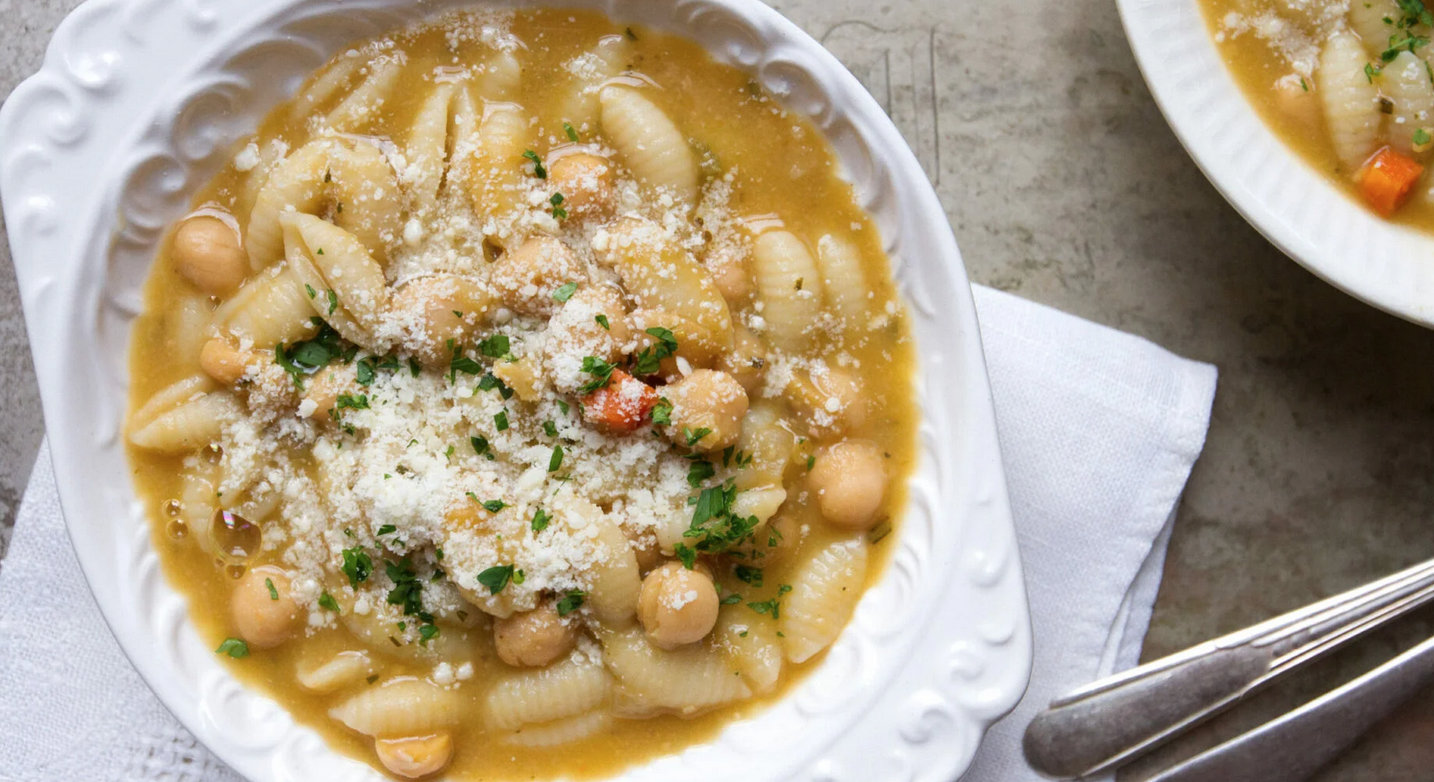 This soup is a meal in and of itself. Farideh Sadeghin

Adapted from a Jamie Oliver recipe, this soup needs no accompaniments—it’ll fill you up on its own. If you’ve got canned chickpeas in your pantry, simply combine them with celery, a carrot, an onion, and a few ingredients. Then toss in some pasta. You might find it a bit thicker than the soup you’re used to—the pasta absorbs a lot of liquid—but you can add more stock to thin it out as it reheats. 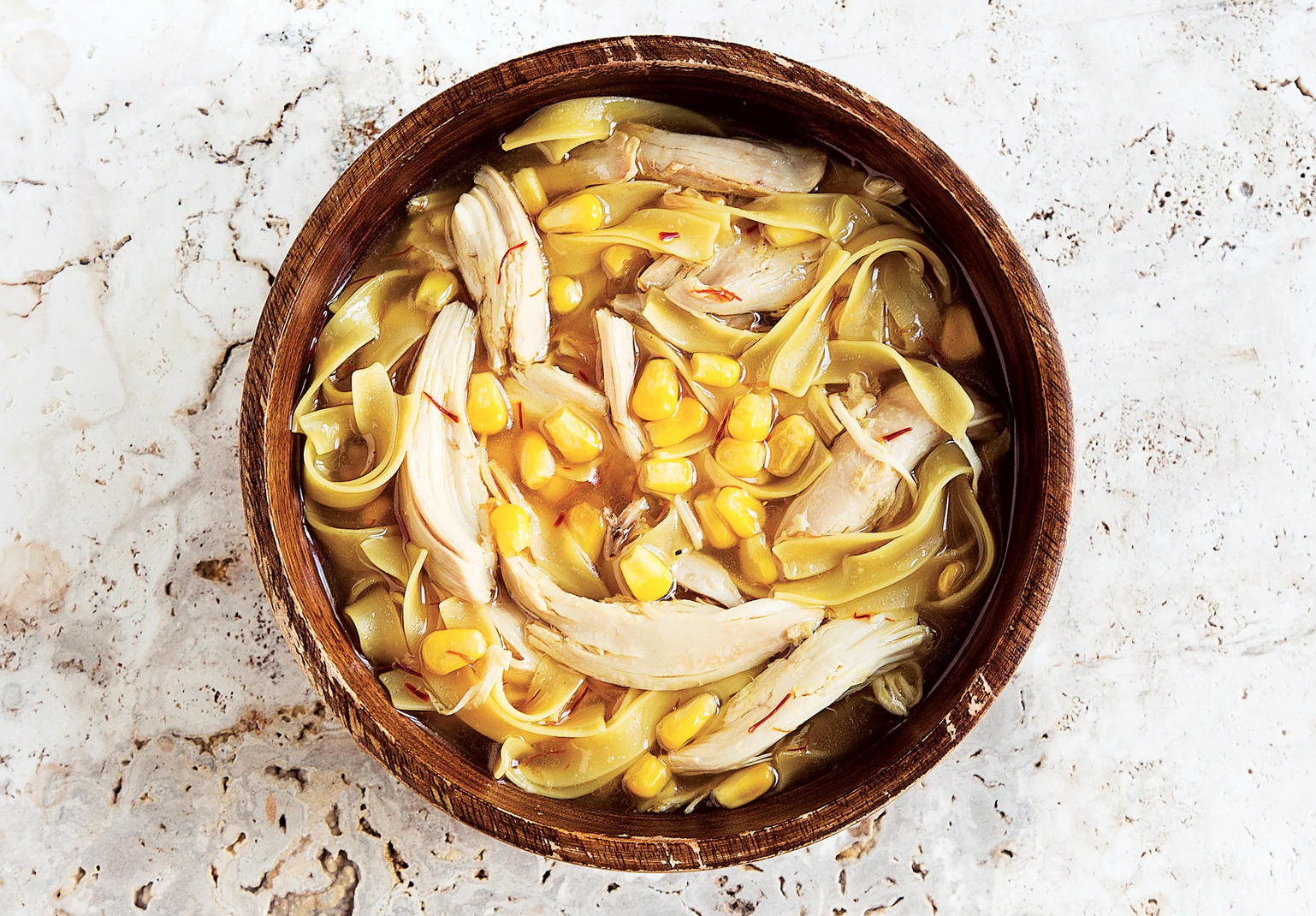 Chicken noodle soup is probably the first soup you remember eating, and you might think it’s hard to improve on something so loved. This recipe makes an old standard a little more fun. It’ll take two hours (you’ve got to roast a whole chicken), but when you’re done you’ll have enough for 8 to 10 people. If you’re not familiar with saffron, it’s a somewhat sweet spice that’s grown extensively in Spain and Iran, but can be purchased from a few growers in the U.S. as well as from international suppliers.

Carrot soup with ginger and leeks 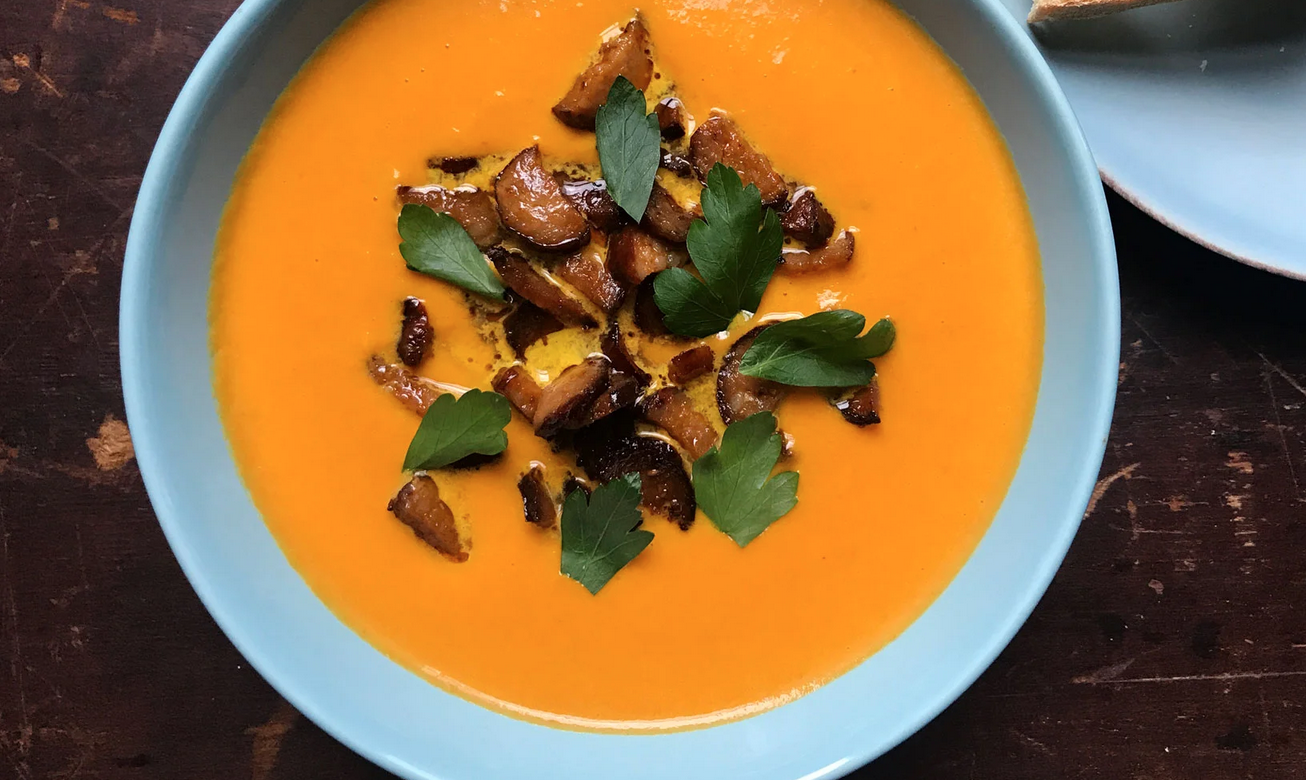 Seasonally, this spicy carrot ginger soup is great in the winter, but who cares about seasons when you’re stuck inside? Katherine Whittaker

Get ready to puree some carrots—you’ll need a blender for this one. If you want to add a little heat to the soup, consider adding chopped hot red chiles or crushed red pepper flakes, but that’s totally optional if you like things on the mild side. Once you’ve got a nice, smooth base, add some cooked sausage to complete the dish. 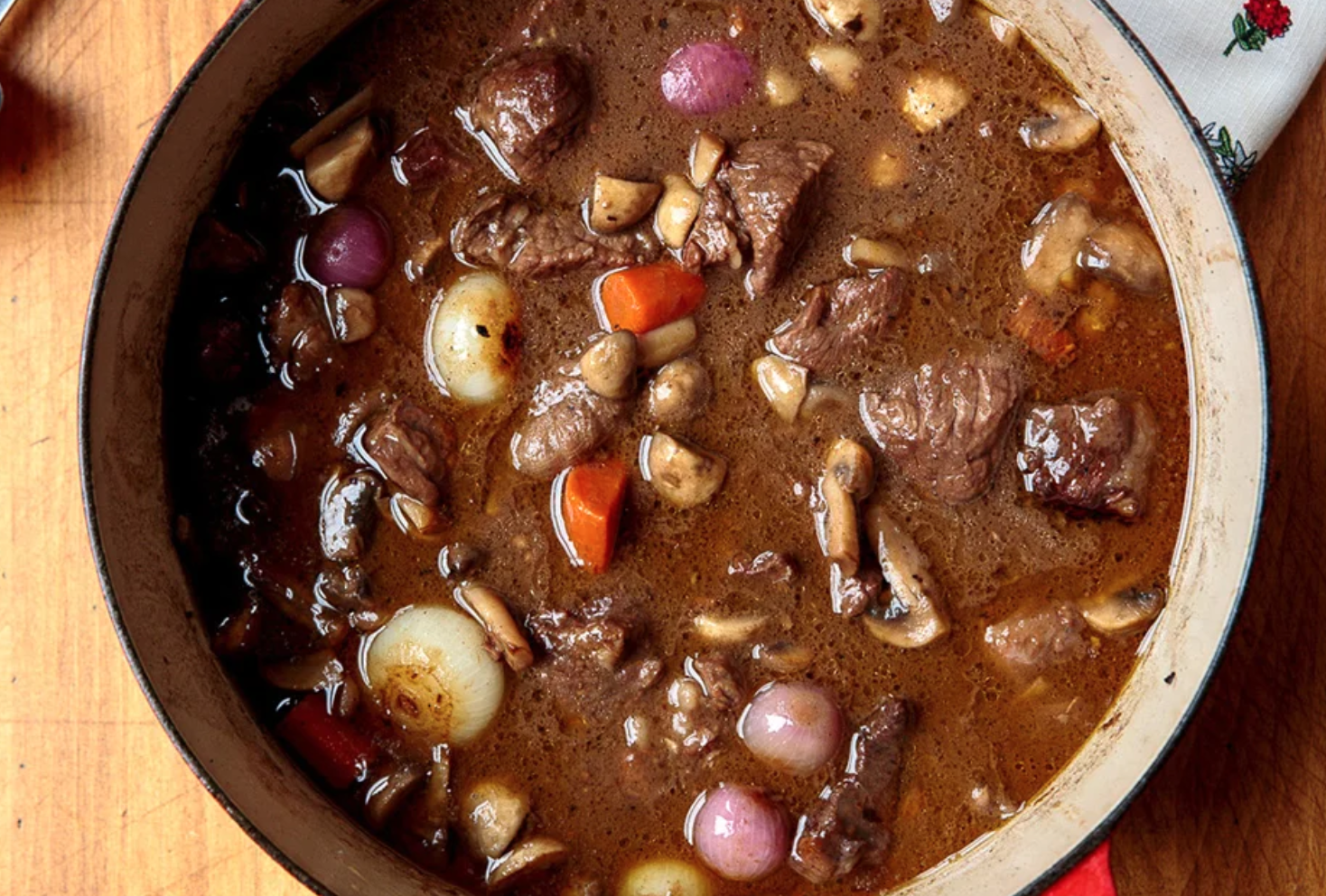 You might have to spend a little more time with this stew, but it’s worth it. Ingalls Photography

Most of the soups on this list so far have been heavily vegetable-based, but this one’s for the meat lovers. You will have to marinate the beef overnight, so make sure you’re prepared for that time commitment. Beyond its namesake ingredient, this stew has bacon, carrots, garlic, onions, and mushrooms. You can serve it with bread, too, but if you don’t have any, don’t worry—just eat it straight out of a bowl.

This soup comes with a little bit of a story—it’s an adaptation of a soup that Saveur’s former editor-in-chief, Stacy Adimando, learned how to make from her grandmother. It’s a little more complicated than tossing a bunch of stuff into a pot, as you’ll need to cook and shred the chicken and make some rice, but this recipe transforms relatively simple ingredients into something Adimando says she simply “cannot live without.” 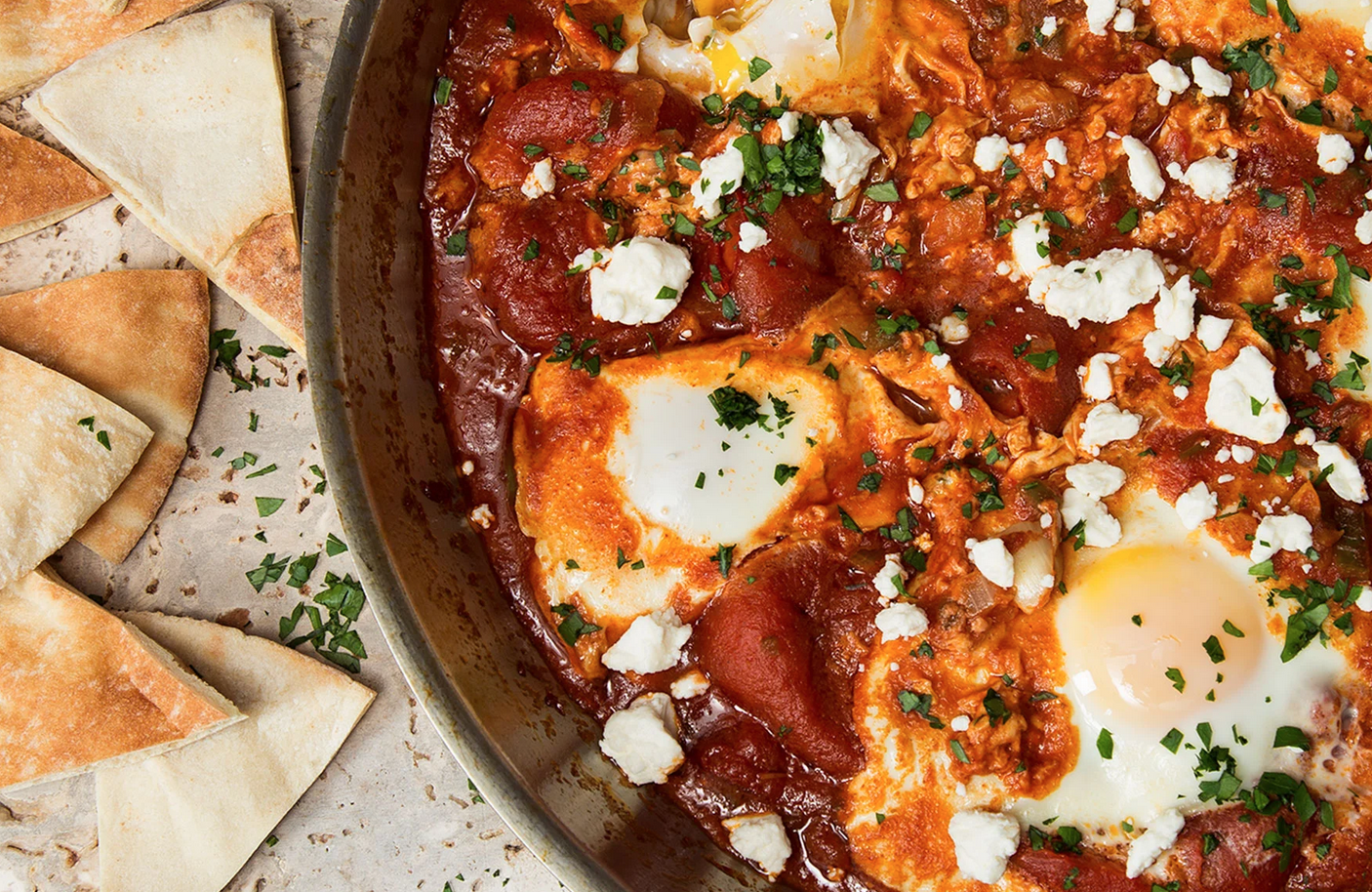 For those who like to eat breakfast all day, or want to eat eggs for dinner. Matt Taylor-Gross

Diverging a bit from what most you might consider soup, this hearty dish is a solid choice for any meal of the day. It’s a classic breakfast in Israel, and Craddock says it’s her go-to brunch for New Year’s Day because it’s so easy to prepare in advance. You don’t need a big pot for it either, just a 12-inch pan or cast iron skillet. Don’t poach the eggs before you freeze it, though—wait until you reheat the sauce and slide them just before serving. 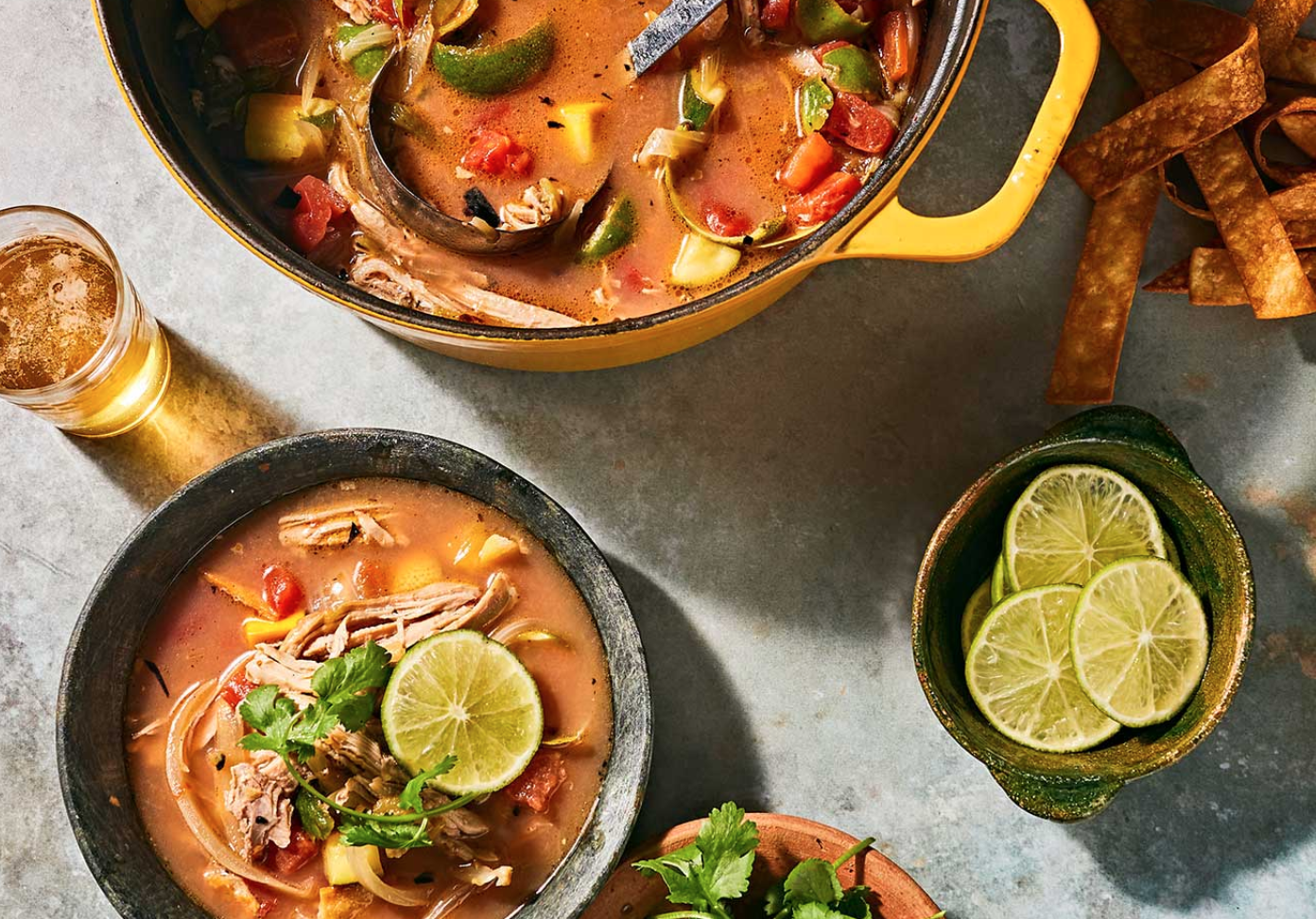 Charring the peppers, onion, and garlic before simmering them in the soup deepens the flavor of this take on the Yucatán’s sopa de lima. Jenny Huang

A popular regional specialty in Mérida, the capital of the Mexican state of Yucatán, this deeply flavored soup combines turkey with peppers, onion, zucchini, squash, tomatoes, and lime. If you can’t get your hands on a turkey leg, skinless chicken thighs work, too. It goes well with corn chips. 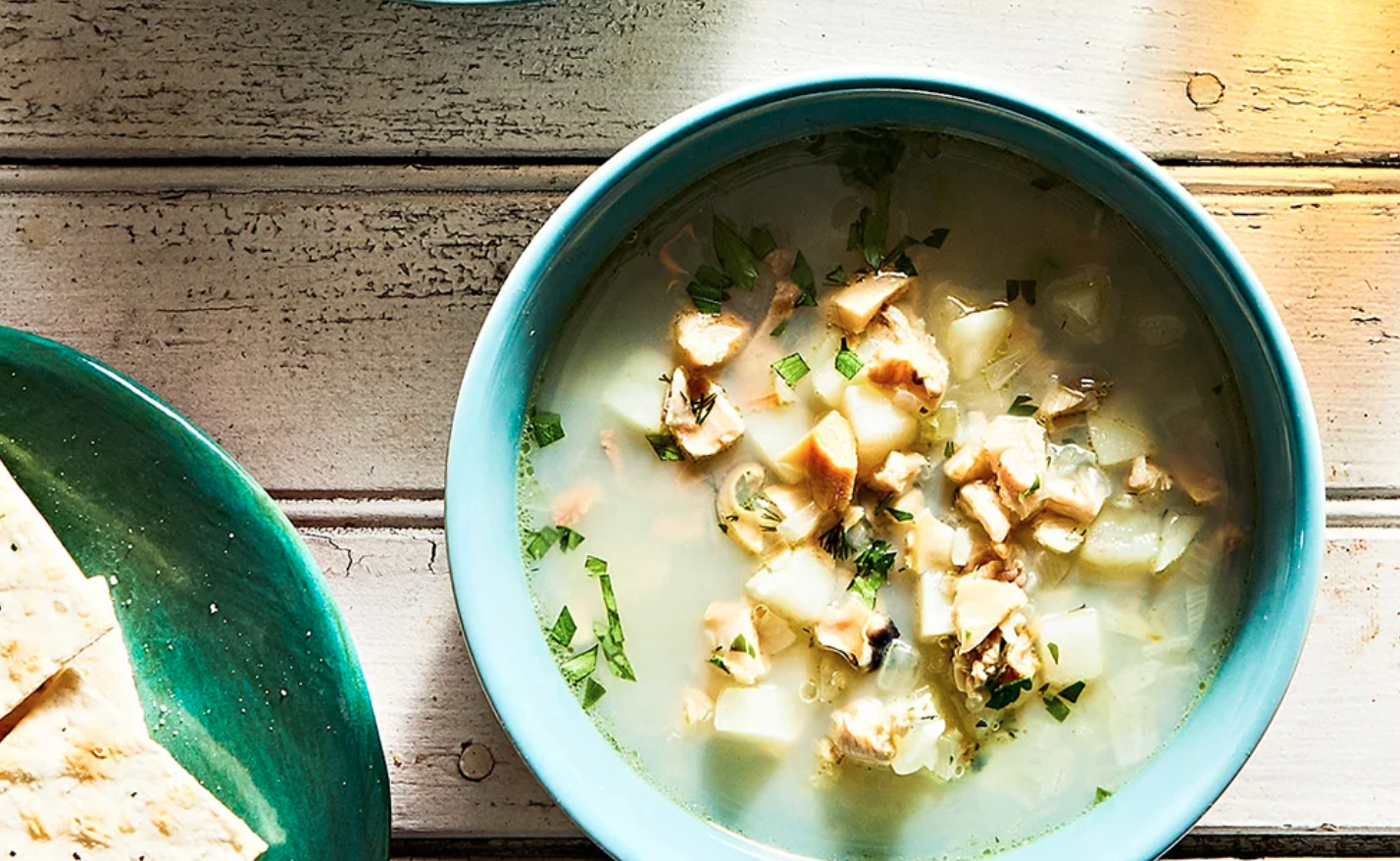 Digging up clams can be hard. Pouring them out of a can is not. Jenny Huang

This recipe calls for fresh clams, but Craddock says canned clams and clam broth are acceptable replacements if you’re stuck inside due to a viral outbreak. It’ll also be a little easier to do so, as cooking with whole clams can be tricky—if you don’t clean them well enough, they’ll leave sand in your food. But when you can’t go outside and want a little taste of New England, any kind of clams in a savory broth made with potatoes, onion, and celery will do the trick.