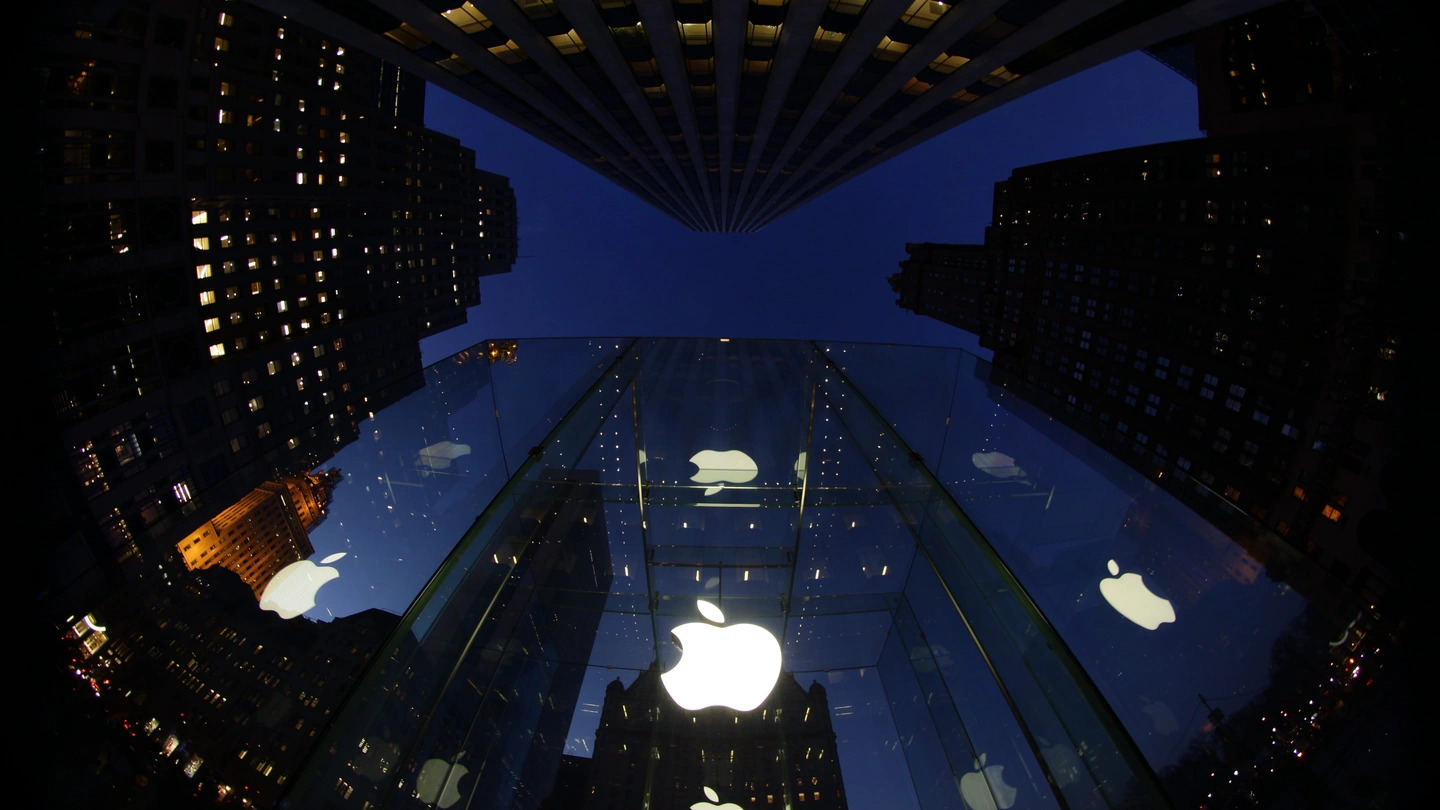 While lots of attention is directed toward identifying the next great start-up, the defining tech-industry story of the last decade has been the rise of Apple and Google. In terms of wealth creation, there is no comparison. Eight years ago, neither one of them was even in the top 10 most valuable companies in the world, and their combined market value was less than $300 billion. Now, Apple and Alphabet (Google’s parent company) have become the two most valuable companies, with a combined market capitalization of over $1.3 trillion. And increasingly, these two behemoths are starting to collide in various markets, from smartphones to home-audio devices to, according to speculation, automobiles.

But the greatest collision between Apple and Google is little noticed. The companies have taken completely different approaches to their shareholders and to the future, one willing to accede to the demands of investors and the other keeping power in the hands of founders and executives. These rival approaches are about something much bigger than just two of the most important companies in the world; they embody two alternative models of capitalism, and the one that wins out will shape the future of the economy.

In the spring of 2012, Toni Sacconaghi, a respected equity-research analyst, released a report that contemplated a radical move for Apple. He, along with other analysts, had repeatedly been pushing Apple’s CEO, Tim Cook, to consider returning some of Apple’s stockpile of cash, which approached $100 billion by the end of 2011, to shareholders. Cook, and Steve Jobs before him, had resisted similar calls so that the company could, in the words of Jobs, “keep their powder dry” and take advantage of “more strategic opportunities in the future.”

But there was another reason Apple wouldn’t so readily part with this cash: The majority of it was in Ireland because of the company’s fortuitous creation of Apple Operations International in Ireland in 1980. Since then, the vast majority of Apple’s non-U.S. profits had found their way to the country, and tapping into that cash would mean incurring significant U.S. taxes due upon repatriation to American soil. So Sacconaghi floated a bold idea: Apple should borrow the $100 billion in the U.S., and then pay it out to shareholders in the form of dividends and share buybacks. The unusual nature of the proposal attracted attention among financiers and served Sacconaghi’s presumed purpose, ratcheting up the pressure on Cook. A week later, Apple relented and announced plans to begin releasing cash via dividends.

The results of Sacconaghi’s report were not lost on Silicon Valley, and Google responded three weeks later. At the time, the share structure that the company put in place when it went public in 2004 was becoming fragile. This original arrangement allowed Google’s founders to maintain voting control over the company, even as their share of ownership shrunk as more shares were issued. The explicit premise was that this structure would “protect Google from outside pressures and the temptation to sacrifice future opportunities to meet short-term demands.”

But by the time of Apple’s announcement in March 2012, this bulwark against outside influence was eroding, as Google’s founders continued to sell stock and employees were issued shares in their compensation packages. A few weeks after Apple’s concession to shareholders, the founders of Google announced a new share structure that would defend against a similar situation: The structure gave the founders’ shares 10 times the voting power of regular shares, ensuring they’d dictate the company’s strategy long into the future and that Google was, in the words of the founders, “set up for success for decades to come.”

What has happened to Google and Apple in the wake of these events is the defining story of early 21st-century capitalism. Apple’s decision in 2012 to begin paying dividends didn’t satiate shareholders—it sparked a wider revolt. Several hedge funds started asking for much larger payouts, with some of them filing suits against Apple and even proposing an “iPref”—a new type of share that would allow Apple to release much more cash in a way that didn’t incur as high of a tax bill. In 2013 and 2014, Apple upped its commitments to distribute cash. From 2013 to March 2017, the company released $200 billion via dividends and buybacks—an amount that is equivalent to, using figures in S&P’s Capital IQ database, more than 72 percent of their operating cash flow (a common metric of performance that is about cash generation rather than profit accrual) during that period. And to help finance this, Apple took on $99 billion in debt. Sacconaghi’s vision had come true.

What has Google done in that same period? Google is, like Apple, making loads of money. From 2013 to March 2017, it generated $114 billion in operating cash flow. How much has the company distributed to shareholders? In contrast to Apple’s 72 percent payout rate, Google has only distributed 6 percent of that money to shareholders.

The paths taken by Apple and Google manifest alternative answers to one of the main questions facing capitalism today: What should public companies do with all of the money that they’re making? Even as corporations have brought in enormous profits, there has been a shortage of lucrative opportunities for investment and growth, creating surpluses of cash. This imbalance has resulted in the pileup of $2 trillion on corporate balance sheets. As companies continue to generate more profits than they need to fund their own growth, the question becomes: Who will decide what to do with all those profits—managers or investors? At Google, where the founders and executives reign supreme, insulated by their governance structure, the answer is the former. At Apple, where the investors are in charge because of the absence of one large manager-shareholder, it’s the latter. (To be clear, even though Apple’s previous efforts to stifle investors’ concerns were no longer tenable, the company can still afford to spend mightily on research and development.)

Why has each company taken the approach that it has? These two strategies reflect different reactions to an issue central to modern capitalism, the separation of ownership and control. In short, owners aren’t managers, as they once were when businesses existed on a smaller scale. And when owners have to outsource running the company to executives, this leads to what economists call “the principal-agent problem,” which refers to the issues that come up when one person, group, or company—an “agent”—can make decisions that significantly affect another—a “principal.”

Having investors dominate, as Apple does, is a good way of handling one principal-agent problem: getting managers to do right by their owners. Rather than spending money on failed products (remember Google Plus?) or managers’ pet projects, Apple has to face the disciplining force of large investors. In a way that individual shareholders would have trouble doing, larger investors can act swiftly to put a check on managers who might pursue goals that enrich themselves, such as wasteful mergers, excessive executive compensation, or lush perks. And, after all, a company’s profits theoretically belong to investors, so why shouldn’t they decide how they are put to use?

Proponents of the managerial model embodied by Google worry about a different principal-agent problem. Rather than being concerned about managers ignoring investors, they are concerned that investors won’t serve the people who would benefit from the long-term success of the company. Those professional investors are both the principals for the CEOs but also the agents of many other shareholders. The hedge funds that pressured Apple are the dreaded “short-term” investors who are interested only in quick wins and don’t serve their longer-term beneficiaries, such as pension funds, that allocate capital to them in the first place. As investors, hedge funds are impatient, and, the argument goes, ruining the economy by shortening time horizons.

Who’s right? Which principal-agent problem is more vexing? Stock-market returns are one, albeit imperfect, way of answering this question and since the initial developments, Google has far outperformed Apple. But that pattern is flipped if the time frame is restricted to the past year. So it won’t be known for many years to come if Apple or Google has a sharper financial strategy.

More importantly, though, how do these strategies impact the lives of everyday people? A capitalist system aims for the efficient allocation of capital, and indeed, workers have a better shot at seeing median wages increase when money is being put to its most productive use. So to an extent, how they fare under each system has to do with who is deciding where and how profits get invested. When managers reallocate profits, that reallocation benefits from the capabilities and knowledge that companies have built over decades, but suffers from the possibly poor incentives of managers. When investors are the ones reallocating profits, however, the scope of the reallocation can be broader, theoretically leading to more innovation; at the same time, those investors don’t have preexisting organizational capabilities and they may suffer from their own short-term time horizons.

Even if one considers the disparities in the shares of wealth accruing to labor and capital problematic—and there certainly are other strategies for addressing those disparities—making sure that managers and investors are dividing their responsibilities on capital allocation efficiently is critical for making the economic pie as big as it can be. And in that regard, while the problems of Google's model are significant, they are also well appreciated. The excesses of Apple's model and the widespread deployment of share buybacks are just as dangerous—and not nearly as well understood.

So which model of capitalism will win out? The dominant corporate-finance pattern for the last decade has been Apple’s. Companies have been distributing cash via share buybacks and have borrowed money to finance these distributions at a rapid rate. As American stalwarts such as Deere, IBM, Amgen, and 3M cede power to investors, it’s like watching leveraged buyouts unfold in slow motion.

The importance of these two models might soon escalate dramatically. There’s a real possibility that tax reform at the federal level will unlock the offshore cash that corporations have amassed, and the subsequent flood of money will have to be reallocated in the economy—somewhere, somehow.

Mihir A. Desai is a professor at Harvard Business School and Harvard Law School. He is the author of The Wisdom of Finance: Discovering Humanity in the World of Risk and Return.