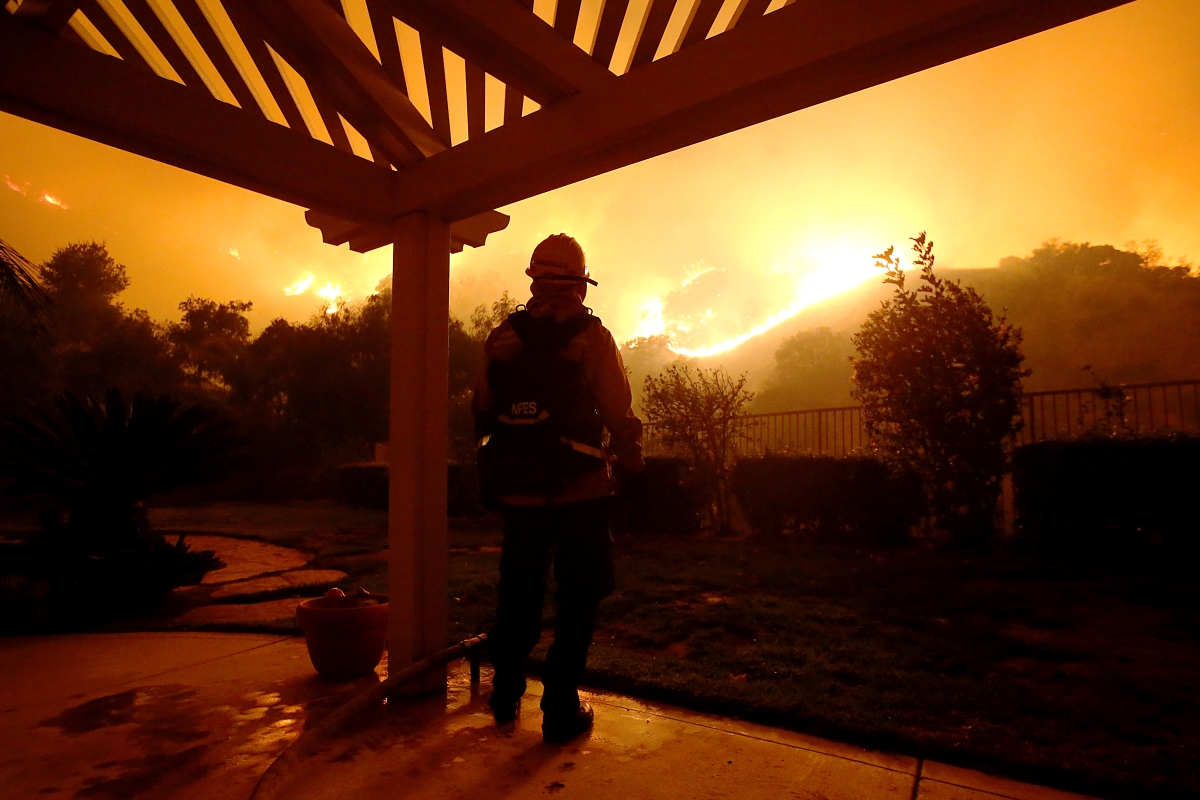 A firefighter watches the Canyon Fire as it burns near homes on September 25th, 2017 in Corona, California.  Photo by Luis Sinco / Los Angeles Times via Getty Images.

A thousand years from now, when some vaguely human-like machine digs through the ashes of the Twenty-First century and tries to figure out what happened to those once-thriving animals called Homo sapiens, it may be confused about why an intelligent species that could build rockets and write songs like “Imagine” couldn’t heed warnings of its own destruction. A key question for future historians of the universe: How stupid were those humans anyway?

A 2018 report from the United Nations’ Intergovernmental Panel on Climate Change (IPCC), the gold standard of climate science, outlined in frightfully stark terms what it would take to keep the earth’s temperature below 1.5 C of warming, which is the threshold for avoiding catastrophic climate change like the collapse of rain forests and coral reefs, rapid melting of the ice sheets that would swamp coastal cities around the world and heat extremes that could lead to millions of climate refugees.

Let me underscore this: It’s not enough that Portland, Oregon, or Berkeley, California, get to zero carbon emissions by 2050. Or the entire state of California, for that matter. Or even the entire United States. The entire world must eliminate (or offset) carbon pollution by 2050.

“It’s like a deafening, piercing smoke alarm going off in the kitchen. We have to put out the fire,” Erik Solheim, executive director of the U.N. Environment Program, told the Washington Post.

Is anyone listening to the alarm? Do you see a stampede of coal plant operators rushing to shut down operations to save civilization? Are cattle farmers lining up to transform their stockyards into tofu ranches? Are commuters dumping their SUVS for good?

I don’t think so.

Still, this is a groundbreaking report, if only because it lays out in such stark terms just how dire our predicament truly is.

The world our parents and grandparents grew up in — is gone forever. There is no going back.

First, although it’s true that the challenge of getting to zero emissions by 2050 is daunting, this is no time to let up on the push to eliminate fossil fuels from the world’s energy system. “Climate defeatism,” writes futurist Alex Steffen, “is absolutely a form of denialism.” Cutting carbon pollution remains the most important task, and the best way to preserve a stable climate. Climate scientist Gavin Schmidt paraphrases Eliud Kipchoge, the recent winner of the Berlin Marathon:

“The best time to start [reducing emissions] was 25 years ago. The second best time is today.”

The other big takeaway from this report is that it’s time to get serious about adapting to a rapidly changing world. If we don’t, a good percentage of civilization as we know it today won’t survive.

Until recently, adaptation has been a dirty word for many climate and clean energy activists. If you talk about adaptation, the argument goes, it undercuts the urgency to cut carbon pollution. That’s always been a slippery argument, but, given the predicament we’re in, now it’s downright self-destructive.

As this IPCC report makes clear, it’s too late to stop climate change. Our world is changing fast, and those changes are only going to accelerate — no matter how rapidly we cut carbon pollution (although cutting carbon pollution can have a big impact on the pace and trajectory of those changes).

From a purely economic point of view, the cost of climate denial is already enormous. In 2017, damages from extreme weather hit $306 billion in the U.S. alone. If we don’t rethink how and where we build homes and infrastructure, those costs will only grow.

What does adaptation mean? In the broadest sense, it means thinking differently about where we live, how we live, what we eat, how we travel. More specifically, it means things like adapting coastal cities to rising seas by rethinking the boundary between land and sea and enacting policies that encourage retreat from low-lying areas, raising taxes to fund infrastructure improvements, reforming flood insurance, changing zoning laws to prevent building in wildfire zones, and perhaps most important, fighting to be sure that the billions of dollars that are sure to flow into climate adaptation projects aren’t focused on protecting the rich. Climate adaptation is already a profound social justice issue, and the division between the saved and the doomed is likely to grow as climate impacts increase.

But adaptation also means talking openly about geoengineering (often defined as the large-scale manipulation of the earth’s climate to reduce the risks of warming). There are different technologies that might be useful, but the most powerful — and controversial — is known as solar radiation management. To put it simply, you inject tiny particles into the stratosphere to help reflect away a small amount of sunlight, which would then cool the planet. There are many complexities to this, especially in the realm of governance and social acceptability (to learn more about it, check out my book How to Cool the Planet, or Oliver Morton’s excellent The Planet Remade). And it’s certainly not a quick fix for many of the problems caused by too much carbon in the atmosphere (it does nothing, for example, to reduce ocean acidification). But done intelligently (i.e., guided by good science and a big dose of humility), it might be a way of taking the edge off a radical warming and buy a little more time to eliminate fossil fuels.

The IPCC report makes little mention of solar geoengineering, beyond saying that there is high agreement that it could keep temperatures below 1.5C. And that is not surprising, given how controversial geoengineering is, and how new the science is that informs it.

In a 2011 Rolling Stone profile I wrote of Lowell Wood, a Pentagon weaponeer who was an early advocate of geoengineering, he put it bluntly:

Wood believes that geoengineering the climate is inevitable, if only because politics and economics will demand it. Geoengineers, he says in a recent e-mail, will just have to wait patiently until the “political elites” decide that it is in their best interest to act. Once they realize that geoengineering is the cheapest solution, he predicts, “they’ll swiftly & reliably beat a bath to the Geoengineering Door. 🙂 The future is ours, Comrades – history (well geophysics & economics is on Our Side! :-)”

Of course, you could argue that, given that we can’t even get it together to shut down coal plants, monkeying around with the earth’s climate is a surefire way to fuck up our planet even more than we already have. And you might be right.

But that’s the dilemma we find ourselves in today. If nothing else, the IPCC report tells us that the world we all grew up in — and the world our parents and grandparents grew up in — is gone forever. There is no going back. We are plunging into a rapidly changing world, one that is unlike anything humans have experienced before, and those changes will only accelerate in the coming years. We know this to be true, as surely as we know the sun will rise tomorrow.

What’s still unclear is what, if anything, we are prepared to do about it.