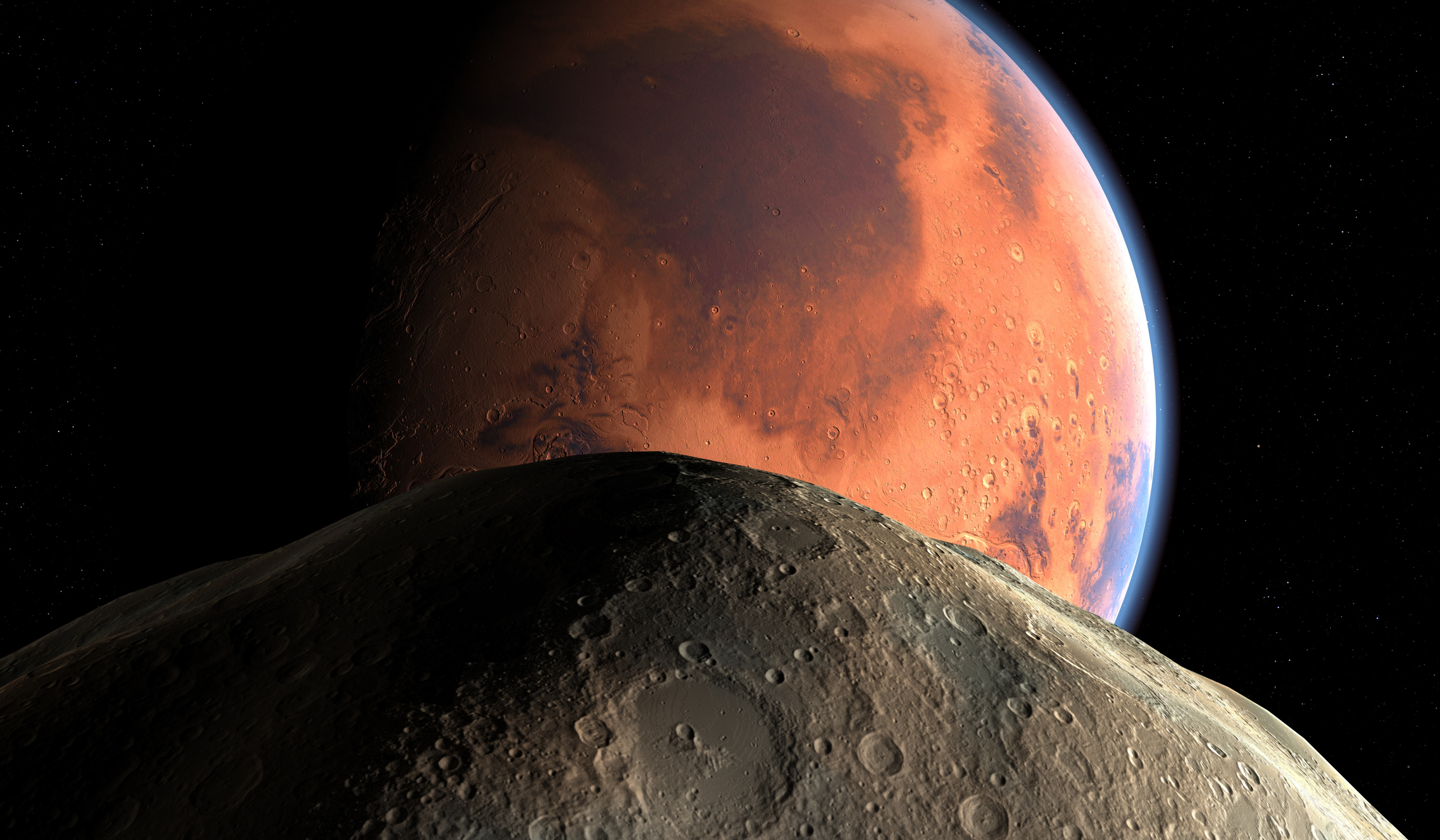 ‘You can’t hunt for something if you have no idea what it is.’ Credit: Mark Garlick / Science Photo Library / Getty Images.

In July, three unmanned missions blasted off to Mars – from China (Tianwen-1), the US (Nasa’s Mars 2020 Perseverance Rover) and the United Arab Emirates (Hope). The Chinese and American missions have lander craft that will seek signs of current or past life on Mars. Nasa is also planning to send its Europa Clipper probe to survey Jupiter’s moon Europa, and the robotic lander Dragonfly to Saturn’s moon Titan. Both moons are widely thought to be promising hunting grounds for life in our solar system – as are the underground oceans of Saturn’s icy moon Enceladus.

Meanwhile, we can now glimpse the chemical makeup of atmospheres of planets that orbit other stars (exoplanets), of which more than 4,000 are now known. Some hope these studies might disclose possible signatures of life.

But can any of these searches do their job properly unless we have a clear idea of what “life” is? Nasa’s unofficial working definition is “a self-sustaining chemical system capable of Darwinian evolution”. “Nasa needs a definition of life so it knows how to build detectors and what kinds of instruments to use on its missions,” says zoologist Arik Kershenbaum of the University of Cambridge. But not everyone thinks it is using the right one.

Astrobiologist Lynn Rothschild of Nasa’s Ames research centre in California sees a cautionary tale in AA Milne’s story from Winnie-the-Pooh, in which Pooh and Piglet hunt a Woozle without knowing what it looks like and mistake their own footprints for its tracks. “You can’t hunt for something if you have no idea what it is,” she says.

The problem of defining life has haunted planetary scientists ever since Nasa’s two Viking landers touched down on Mars in 1976. Since then, rovers have travelled dozens of miles over the Martian plains but found no hint of life. Would we know it if we saw it, though?

Some astrobiologists – scientists who study the possibility of life on other worlds – think our view is too parochial. We only know of one kind of life: the terrestrial sort. All living things on Earth are made from cells adapted to a watery environment, using molecular machinery built from proteins and encoded as genes in DNA. Few scientists think that extraterrestrial life – if it exists at all – would rely on the same chemicals. “It would be wrong to assume that our familiar biochemistry is what we’re going to find on other planets,” says Kershenbaum. Titan’s surface, for example, is too cold (minus 179C) for liquid water, but the Huygens lander mission of 2005 revealed lakes of another kind, made from hydrocarbons like those in petrol, mainly methane and ethane.

Rothschild thinks the universal rules of chemistry narrow some of the options. “I have difficulty imagining another life form that is not based on carbon,” she says. So it makes sense to design life-seeking planetary missions with that in mind. Water too “has a ton of advantages” as life’s solvent. Even if there were interesting chemical reactions happening in the methane lakes of Titan, they would be slowed down greatly by the frigid temperatures. Could life proceed at such a glacial pace? Planetary scientist Stuart Bartlett of the California Institute of Technology in Pasadena is keeping an open mind. “There could be organisms floating in Titan’s atmosphere that essentially drink petrol to sustain themselves,” he says.

It has long been thought that any entities that warrant being called alive share attributes that don’t depend on their precise chemical composition. It’s frustratingly difficult, however, to say just what those general qualities are. Living systems – even bacteria – are extremely complex, maintained by information that passes (in our case via genes) between generations and creates organisation. But that’s not the cold, dead order of crystals, where atoms are stacked in regular patterns. It’s more like the dynamic order of a city or a cloud formation, which scientists say is “out of equilibrium”: it is constantly fed with energy and doesn’t settle into a static state.

When James Lovelock, now known for the Gaia hypothesis that proposes our entire planet is akin to a living entity, was involved in designing the Viking landers in the 1970s, he suggested looking for such chemical disequilibrium in the environment – which perhaps only life could sustain over geological timescales. But states of “ordered disequilibrium” can also be found in non-living systems, such as flowing liquids, so this criterion alone doesn’t single out life.

Bartlett, working with astrobiologist Michael Wong of the University of Washington in Seattle, argues that we need to escape the straitjacket of Earth-based thinking about life. They propose introducing a broader category called “lyfe” (pronounced, in an oddly West Country fashion, as “loif”), of which life as we know it is just one variation. “Our proposal attempts to break free of some of the potential prejudices due to us being part of this one instantiation of lyfe,” says Bartlett.

They suggest four criteria for lyfe:

The two researchers say there are “sublyfe” systems that only meet some of these criteria, and also perhaps “superlyfe” that meets additional ones: lyfe forms that have capabilities beyond ours and that might look on us as we do on complex but non-living processes such as crystal growth.

“Our hope is that this definition frees our imaginations enough to not miss lyfe that might be hiding in plain sight,” says Bartlett. He and Wong suggest that some lyving organisms might use energy sources untapped here on Earth, such as magnetic fields or kinetic energy, the energy of motion. “There is no known life form that directly harnesses kinetic energy into its metabolism,” says Bartlett.

They say there might be other ways of storing information than in genetic strands like DNA. Scientists have, for example, already devised artificial ways to store and process information using two-dimensional arrays of synthetic molecules, like checkerboard arrays or abacuses. Bartlett says that the distinction between lyfe and non-lyfe might be hazy: being “alyve” might be a matter of degree. After all, scientists already argue about whether viruses qualify – although no one doubts their ability to wreak havoc with life.

He’s sceptical of the notion in Nasa’s working definition that lyfe/life can only arise and develop by Darwinian evolution. He says that even terrestrial organisms can shape their behaviour in ways that don’t depend on Darwin’s mechanism of random mutations coupled to competition for resources that selects advantageous mutations. “While Darwinian evolution does of course occur, I think it needs to be augmented into a larger picture of biological learning,” he says.

Astrobiologist and physicist Sara Walker of Arizona State University agrees. “There might be some systems that have many attributes of life but never cross the threshold to Darwinian life,” she says. But in his new book The Zoologist’s Guide to the Galaxy, Kershenbaum says it’s hard to imagine any other process that could produce complex chemical systems worthy of being considered alive (or alyve). Evolution by natural selection, he says, follows “well-defined principles that we know will apply not just on Earth but elsewhere in the universe” – and he is “very confident that it will be driving the diversity of life on alien planets”. If that’s so, he argues, we can make reasonable assumptions about other attributes it will have: for example that life will have a process like photosynthesis to harvest energy from the parent star.

Bartlett and Wong also question whether lyving things must have sharp physical boundaries. After all, while we might imagine that we are simply everything inside our skin, we depend on other organisms within us: the microbiome of bacteria in our guts. And some philosophers argue that our minds extend beyond our brains and bodies, for example into our technological devices. “We argue for lyfe being a process that probably happens on the scale of whole planets,” says Bartlett. Walker agrees that “the only natural boundary for living processes is the planetary” – reminiscent of Lovelock’s Gaia hypothesis.

But without some confining boundary for the molecular ingredients, says Rothschild, all the components of a living system would get diluted away in its environment, like droplets of ink in water. And Kershenbaum says separate, bounded organisms are needed if evolution is Darwinian, because only then is there something else to compete with.

Walker thinks that in fact Bartlett and Wong don’t go far enough in trying to free ideas about life from terracentrism. Their notion of lyfe, she says, “is kicking down the road many of the problems pervasive in current definitions of life by coming up with a broader definition based on existing ones. It still shares many of the same basic problems. We don’t need new definitions for life. What we need is new theories getting at the underlying principles that govern living physics in our universe.”

Another possibility for broadening our view of what life could be is that we become able to make living systems from scratch in the laboratory that are totally unlike any known. “We’re much closer to that than you might think,” Rothschild says. Indeed, it may have already happened and we didn’t recognise it, she adds, only half-jokingly. If we don’t know what we’re looking for, some researcher might already have made a new form of life – and flushed it down the sink.

In the end, perhaps we shouldn’t be too sure that life fits any natural definition, Rothschild says. “I believe that what we have right now are non-natural definitions of life, because we have only one data point. I wonder whether life is just what we define it to be.”

“We may discover systems that are so weird and unexpected that we can’t quite decide whether they are alive or not,” says Kershenbaum. “But if we discover something really interesting and complex that doesn’t quite fit the definition of life, that’s still a really exciting achievement. We’re not going to ignore it because it doesn’t fit our definition!”

Philip Ball is a science writer. His latest book is “Beyond Weird: Why Everything You Thought You Knew About Quantum Physics is Different.”