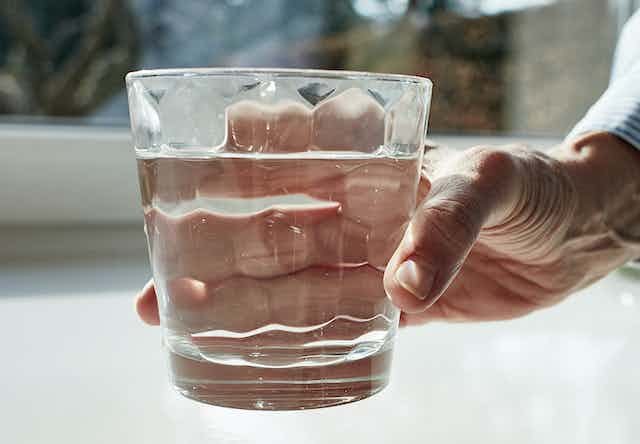 Some of North America’s groundwater is so old, it fell as rain before humans arrived here thousands of years ago. Maria Fuchs via Getty Images

Communities that rely on the Colorado River are facing a water crisis. Lake Mead, the river’s largest reservoir, has fallen to levels not seen since it was created by the construction of the Hoover Dam roughly a century ago. Arizona and Nevada are facing their first-ever mandated water cuts, while water is being released from other reservoirs to keep the Colorado River’s hydropower plants running.

If even the mighty Colorado and its reservoirs are not immune to the heat and drought worsened by climate change, where will the West get its water?

As rising temperatures and drought dry up rivers and melt mountain glaciers, people are increasingly dependent on the water under their feet. Groundwater resources currently supply drinking water to nearly half the world’s population and roughly 40% of water used for irrigation globally.

What many people don’t realize is how old – and how vulnerable – much of that water is.

Most water stored underground has been there for decades, and much of it has sat for hundreds, thousands or even millions of years. Older groundwater tends to reside deep underground, where it is less easily affected by surface conditions such as drought and pollution.

As shallower wells dry out under the pressure of urban development, population growth and climate change, old groundwater is becoming increasingly important.

If you bit into a piece of bread that was 1,000 years old, you’d probably notice.

Water that has been underground for a thousand years can taste different, too. It leaches natural chemicals from the surrounding rock, changing its mineral content. Some natural contaminants linked to groundwater age – like mood-boosting lithium – can have positive effects. Other contaminants, like iron and manganese, can be troublesome.

Older groundwater is also sometimes too salty to drink without expensive treatment. This problem can be worse near the coasts: Overpumping creates space that can draw seawater into aquifers and contaminate drinking supplies. 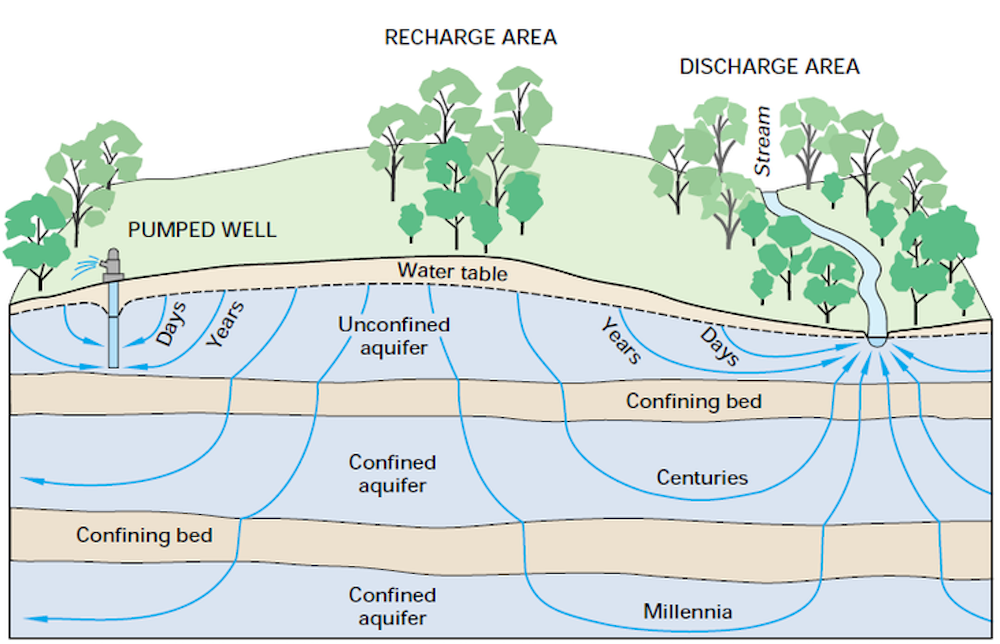 Ancient groundwater can take thousands of years to replenish naturally. And, as California saw during its 2011-2017 drought, natural underground storage spaces compress as they empty, so they can’t refill to their previous capacity. This compaction in turn causes the land above to crack, buckle and sink.

Yet people today are drilling deeper wells in the West as droughts deplete surface water and farms rely more heavily on groundwater.

What Does It Mean for Water to Be ‘Old’?

Let’s imagine a rainstorm over central California 15,000 years ago. As the storm rolls over what’s now San Francisco, most of the rain falls into the Pacific Ocean, where it will eventually evaporate back into the atmosphere. However, some rain also falls into rivers and lakes and over dry land. As that rain seeps through layers of soil, it enters slowly trickling “flowpaths” of underground water.

Some of these paths lead deeper and deeper, where water collects in crevices within the bedrock hundreds of meters underground. The water gathered in these underground reserves is in a sense cut off from the active water cycle – at least on timescales relevant to human life.

In California’s arid Central Valley, much of the accessible ancient water has been pumped out of the earth, mostly for agriculture. Where the natural replenishment timescale would be on the order of millennia, agricultural seepage has partially refilled some aquifers with newer – too often polluted – water. In fact, places like Fresno now actively refill aquifers with clean water (such as treated wastewater or stormwater) in a process known as “managed aquifer recharge.” 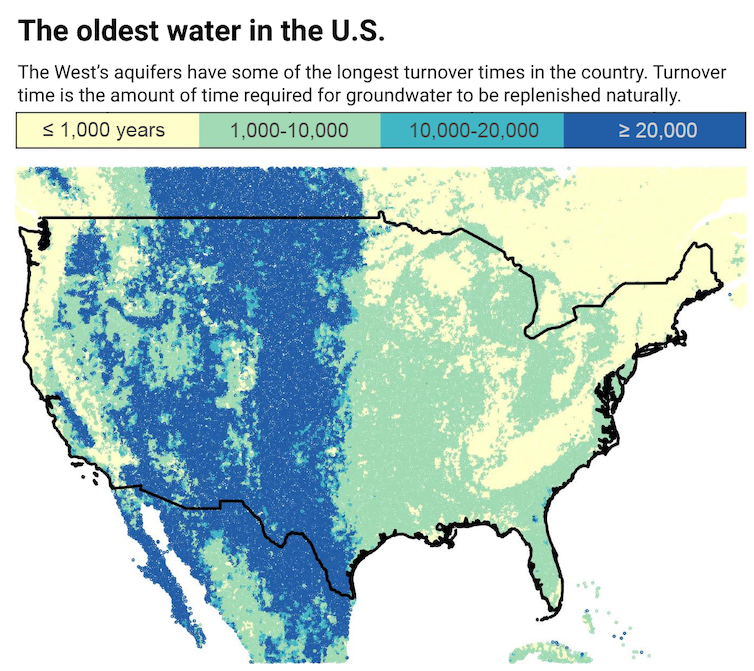 Average turnover times for groundwater in the U.S. Alan Seltzer, based on data from Befus et al 2017, CC BY-ND

In 2014, midway through their worst drought in modern memory, California became the last western state to pass a law requiring local groundwater sustainability plans. Groundwater may be resilient to heat waves and climate change, but if you use it all, you’re in trouble.

One response to water demand? Drill deeper. Yet that answer isn’t sustainable.

First, it’s expensive: Large agricultural companies and lithium mining firms tend to be the sort of investors who can afford to drill deep enough, while small rural communities can’t.

Second, once you pump ancient groundwater, aquifers need time to refill. Flowpaths may be disrupted, choking off a natural water supply to springs, wetlands and rivers. Meanwhile, the change in pressure underground can destabilize the earth, causing land to sink and even leading to earthquakes. 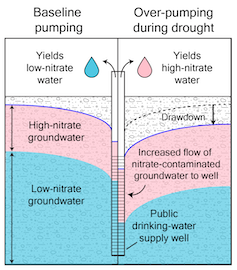 There are other reasons to care about ancient groundwater. Like actual fossils, extremely old “fossil groundwater” can teach us about the past.

Envision our prehistoric rainstorm again: 15,000 years ago, the climate was quite different from today. Chemicals that dissolved in ancient groundwater are detectable today, opening windows into a past world. Certain dissolved chemicals act as clocks, telling scientists the groundwater’s age. For example, we know how fast dissolved carbon-14 and krypton-18 decay, so we can measure them to calculate when the water last interacted with air.

Younger groundwater that disappeared underground after the 1950s has a unique, man-made chemical signature: high levels of tritium from atomic bomb testing. 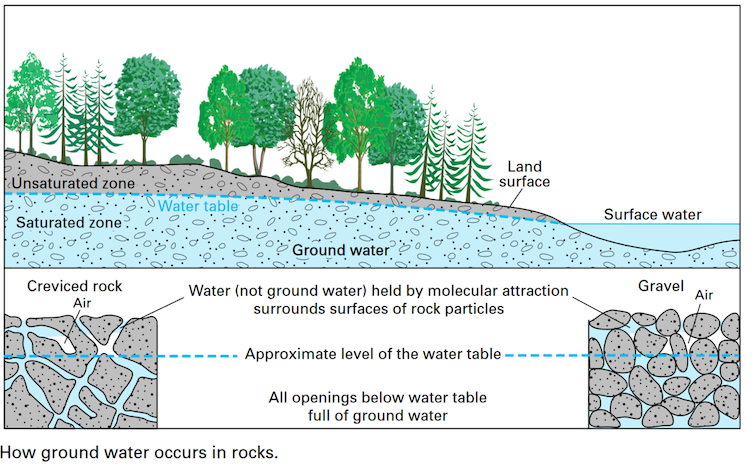 The various components and properties of an unconfined aquifer. USGS

Other dissolved chemicals behave like tiny thermometers. Noble gases like argon and xenon, for instance, dissolve more in cold water than in warm water, along a precisely known temperature curve. Once groundwater is isolated from air, dissolved noble gases don’t do much. As a result, they preserve information about environmental conditions at the time the water first seeped into the subsurface.

The concentrations of noble gases in fossil groundwater have provided some of our most reliable estimates of temperature on land during the last ice age. Such findings provide insight into modern climates, including how sensitive Earth’s average temperature is to carbon dioxide in the atmosphere. These methods support a recent study that found 3.4 degrees Celsius of warming with each doubling of carbon dioxide.

Groundwater’s Past and Future

People in some regions, like New England, have been drinking ancient groundwater for years with little danger of exhausting usable supplies. Regular rainfall and varied water sources – including surface water in lakes, rivers and snowpack – provide alternatives to groundwater and also refill aquifers with new water. If aquifers can keep up with the demand, the water can be used sustainably.

Out West, though, over a century of unmanaged and exorbitant water use means that some of the places most dependent on groundwater – arid regions vulnerable to drought – have squandered the ancient water resources that once existed underground. 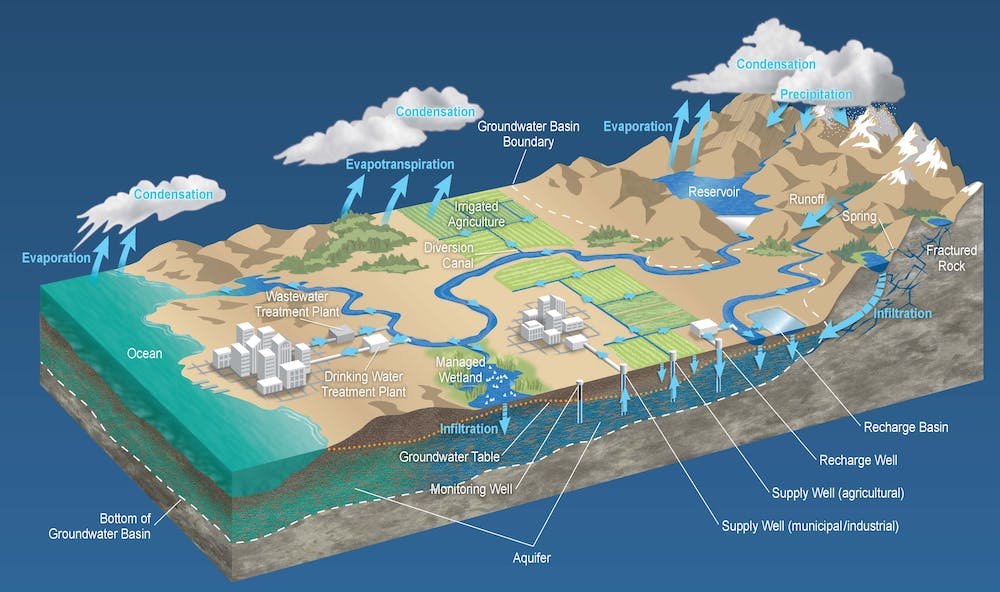 How water use and recharge fit into the hydrological cycle. State of California

A famous precedent for this problem is in the Great Plains. There, the ancient water of the Ogallala Aquifer supplies drinking water and irrigation for millions of people and farms from South Dakota to Texas. If people were to pump this aquifer dry, it would take thousands of years to refill naturally. It is a vital buffer against drought, yet irrigation and water-intensive farming are lowering its water levels at unsustainable rates.

As the planet warms, ancient groundwater is becoming increasingly important – whether flowing from your kitchen tap, irrigating food crops, or offering warnings about Earth’s past that can help us prepare for an uncertain future.

Marissa Grunes is a postdoctoral Environmental Fellow at Harvard's Center for the Environment, where she is working on a book of narrative nonfiction about Antarctica for the general reader.

Alan Seltzer is an assistant scientist in marine chemistry and geochemistry at the Woods Hole Oceanographic Institution, where combines tracer measurements and modeling to track physical and biogeochemical interactions between the atmosphere, ocean, hydrosphere, cryosphere, and solid Earth.

Kevin M. Befus is an assistant professor of hydrogeology at the University of Arkansas. He studies hydrologic systems with a focus on groundwater.