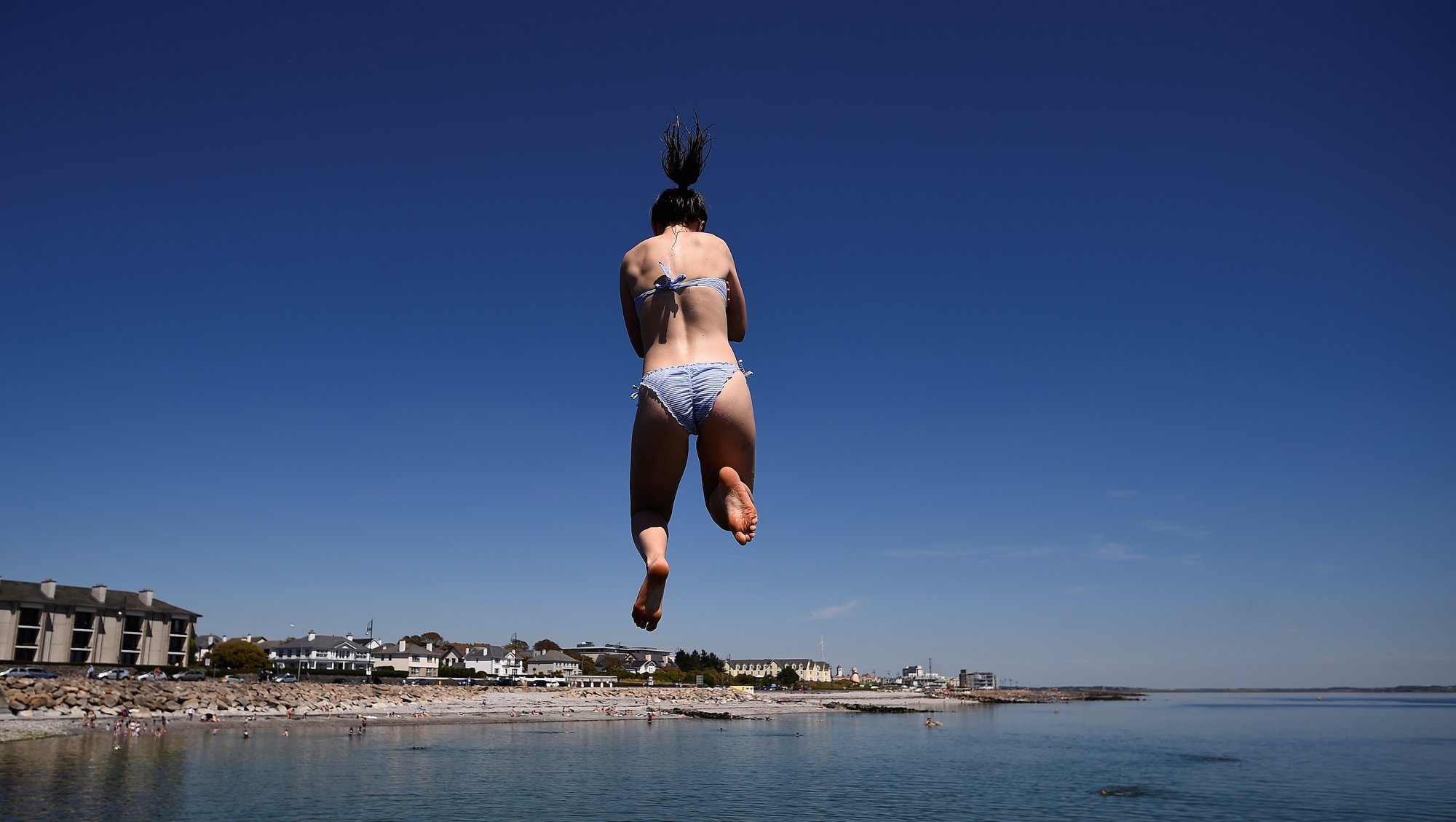 “You must change your life,” Rainer Maria Rilke exhorts readers in the final line of his poem “Archaic Torso of Apollo.” It’s a surprise-twist ending, meant to capture the sudden nature of epiphanies. Having spent the entire poem contemplating the beauty of an ancient Greek statue, Rilke practically reaches through the page to shake readers by the shoulders, urging us to transform ourselves—to use our rapidly-dwindling time on Earth as wisely as Apollo’s sculptor did.

But changing your life is a big deal. It takes a lot of work and emotional energy. And it’s often very difficult to predict if a dramatic turn will actually make us happier and more fulfilled, or if it will be the biggest mistake ever and we’ll shrivel up into little raisins of regret.

So we waffle over whether or not to quit a job, change careers, start a business, or go back to school, weighing endless pros and cons. In behavioral economics, this phenomenon is known as status quo bias. People are generally predisposed to favor sticking with their current circumstances, whatever they may be, instead of taking a risk and bushwhacking their way toward a different life.

That’s an instinct we should fight against, according to the findings of a new study by Steven Levitt, University of Chicago economist and Freakonomics co-author, published in Oxford University’s Review of Economic Studies.

The study asked people who were having a hard time making a decision to participate in a randomized digital coin toss on the website FreakonomicsExperiments.com. People asked questions ranging from “Should I quit my job?” to “Should I break up with my significant other?” and “Should I go back to school?” Heads meant they should take action. Tails, they stuck with the status quo.

Ultimately, 20,000 coins were flipped—and people who got heads and made a big change reported being significantly happier than they were before, both two months and six months later.

“The data from my experiment suggests we would all be better off if we did more quitting,” Levitt said in a press release. “A good rule of thumb in decision making is, whenever you cannot decide what you should do, choose the action that represents a change, rather than continuing the status quo.”

Do more quitting may sound like strange advice in the midst of a pandemic that’s mauling the labor market. Those lucky enough to still have a stable income and health insurance may be quite sensibly wary of jettisoning those things for the great unknown.

But dig a little deeper, and Levitt’s suggested rule of thumb for decision-making turns out to be decidedly evergreen, and may even have added significance in current upheavals of the Covid-19 era. We’re biased toward upholding the status quo, but it’s a bias that hurts us.

Flip a Coin, Make a Change

There are plenty of caveats to this experiment, which collected data over the course of a year beginning in 2013. For one thing, as Levitt explains, the subject pool wasn’t at all random. Participants self-selected into the experiment via various social media channels associated with Freakonomics, and tended to be young, male, and highly-educated. They were also responding to a call specifically for people who were teetering on the brink of making a tough decision. All this means that they may have been more likely to abide by the results of a random coin toss than the average person. (People who got heads on the coin toss were approximately 25% more likely to report making a change than those who got tails, according to the study.) 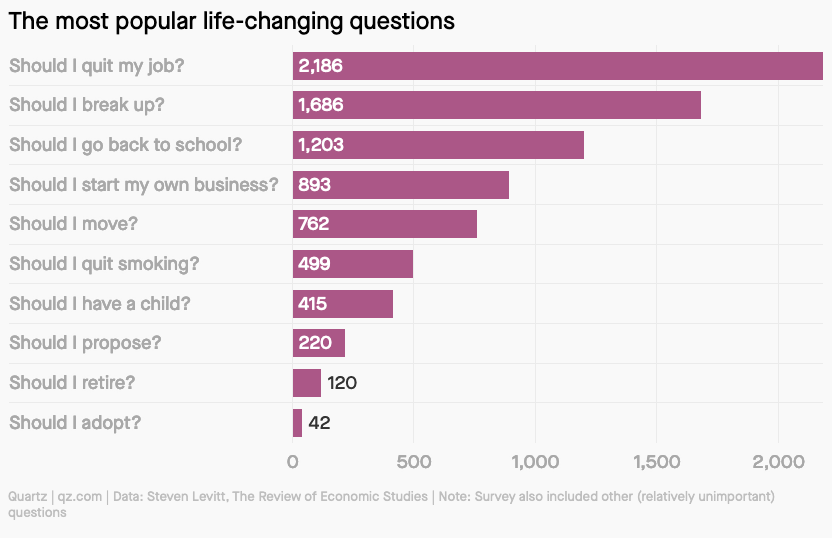 It’s also true that people who followed the instructions of the coin toss may have been more likely to respond to the follow-up surveys months later, compared to those who ignored the coin’s instructions. People who were happy with the results of making a change may have also been more likely to fill out the surveys than people disappointed with the outcome. After all, it’s way more fun to think about how well your life has turned out now that you’ve gone through a major upheaval than it is to report that you think you made a mistake, and would take it back if you could.

In addition, it’s worth noting that the study’s message about the benefits of changing the status quo applies specifically to people who are agonizing about whether or not to make a move. In economic terms, they’re on the margin. People who are mostly content with their jobs probably wouldn’t follow the instructions of a digital coin toss if it told them to quit, and if they did, there’s no reason to think they’d be happier for it. No one’s suggesting we all start living our lives like we’re psychopathic villains in No Country for Old Men. If the status quo is going well, stick with it!

But even accounting for these limitations, the results of the study still suggest a way to break out of those painful cycles of hesitation and indecision that people often get caught in when contemplating major life decisions. If the choice is between action and inaction, and you’re genuinely unsure about what to do, choose action.

Reclaiming Agency in a Time of Upheaval

The entire concept of worrying about whether to make a big life change might seem like a luxury right now. The pandemic and ensuing economic fallout have already forced change upon a lot of people—whether that involves getting laid off or suddenly balancing full-time work with full-time childcare. Some may even feel like they’ve lost control over the direction of their lives, at least for the time being.

But this period of instability, and our equally uncertain future, has also revealed that we can’t always count on the status quo. The choice now isn’t necessarily between quitting your job or keeping it; your job may be eliminated anyway. Similarly, if you’re among those out of work right now, the question “should I start my own business” takes on a different meaning, as the alternative might just be continuing to job-hunt.

Status quo bias is predicated on our hesitation to make a change unless we’re sure that the benefits outweigh the risks. We’re more scared of what we might lose than we are excited about what we might gain. But right now, unfortunately, the losses are mounting up no matter what we do. It’s almost impossible to play things completely safe. And so we may well be primed to listen to Levitt’s rule of thumb and choose the action that represents change.

Were you already trying to decide whether to flee the city for a country life? Now is the time to buy some chickens; odds are you’ll be working remotely either way. Were you an event planner pondering a career change that involved doing more social good? With the calendar wiped clean of events for the time being, you really might as well go for it now.

With any luck, the pandemic will abate sooner rather than later, and the economy will rebound. But even when life improves, it’s useful to remember that the status quo is often not as steady and reliable as it seems.

Back in 2008, in the midst of another historic recession, the writer Sady Doyle offered up her own reflections on the false allure of the status quo. She writes:

“It is easy—maybe too easy—to stop asking yourself what would make you happy, and stay close to the things that you think will make you safe. This is wrong, and I will tell you why: you are never safe. Loss and change are constants. You will never be safe, and you may not always be happy—but you owe it to yourself to start asking the question.”