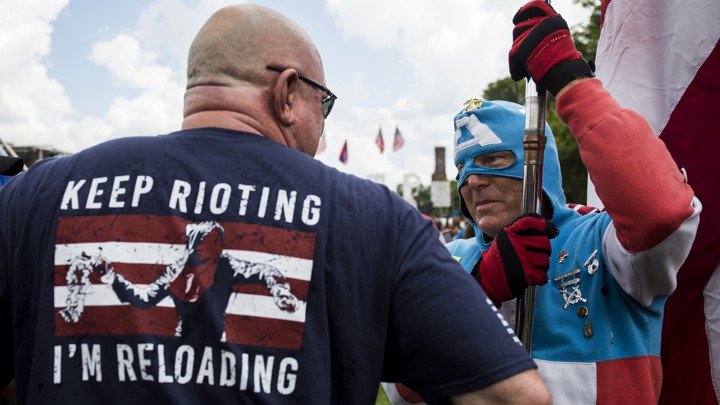 A man dressed as Captain America speaks to a demonstrator during the pro-Trump 'Mother of All Rallies.' Photo by Zach Gibson / AFP / Getty.

On social media, the country seems to divide into two neat camps: Call them the woke and the resentful. Team Resentment is manned—pun very much intended—by people who are predominantly old and almost exclusively white. Team Woke is young, likely to be female, and predominantly black, brown, or Asian (though white “allies” do their dutiful part). These teams are roughly equal in number, and they disagree most vehemently, as well as most routinely, about the catchall known as political correctness.

Reality is nothing like this. As scholars Stephen Hawkins, Daniel Yudkin, Miriam Juan-Torres, and Tim Dixon argue in a report, “Hidden Tribes: A Study of America’s Polarized Landscape,” most Americans don’t fit into either of these camps. They also share more common ground than the daily fights on social media might suggest—including a general aversion to PC culture.

The study was written by More in Common, an organization founded in memory of Jo Cox, the British MP who was murdered in the run-up to the Brexit referendum. It is based on a nationally representative poll with 8,000 respondents, 30 one-hour interviews, and six focus groups conducted from December 2017 to September 2018.

If you look at what Americans have to say on issues such as immigration, the extent of white privilege, and the prevalence of sexual harassment, the authors argue, seven distinct clusters emerge: progressive activists, traditional liberals, passive liberals, the politically disengaged, moderates, traditional conservatives, and devoted conservatives.

According to the report, 25 percent of Americans are traditional or devoted conservatives, and their views are far outside the American mainstream. Some 8 percent of Americans are progressive activists, and their views are even less typical. By contrast, the two-thirds of Americans who don’t belong to either extreme constitute an “exhausted majority.” Their members “share a sense of fatigue with our polarized national conversation, a willingness to be flexible in their political viewpoints, and a lack of voice in the national conversation.”

Most members of the “exhausted majority,” and then some, dislike political correctness. Among the general population, a full 80 percent believe that “political correctness is a problem in our country.” Even young people are uncomfortable with it, including 74 percent ages 24 to 29, and 79 percent under age 24. On this particular issue, the woke are in a clear minority across all ages.

Youth isn’t a good proxy for support of political correctness—and it turns out race isn’t, either.

Whites are ever so slightly less likely than average to believe that political correctness is a problem in the country: 79 percent of them share this sentiment. Instead, it is Asians (82 percent), Hispanics (87 percent), and American Indians (88 percent) who are most likely to oppose political correctness. As one 40-year-old American Indian in Oklahoma said in his focus group, according to the report:

It seems like everyday you wake up something has changed … Do you say Jew? Or Jewish? Is it a black guy? African-American? … You are on your toes because you never know what to say. So political correctness in that sense is scary.

If age and race do not predict support for political correctness, what does? Income and education.

One obvious question is what people mean by “political correctness.” In the extended interviews and focus groups, participants made clear that they were concerned about their day-to-day ability to express themselves: They worry that a lack of familiarity with a topic, or an unthinking word choice, could lead to serious social sanctions for them. But since the survey question did not define political correctness for respondents, we cannot be sure what, exactly, the 80 percent of Americans who regard it as a problem have in mind.

There is, however, plenty of additional support for the idea that the social views of most Americans are not nearly as neatly divided by age or race as is commonly believed. According to the Pew Research Center, for example, only 26 percent of black Americans consider themselves liberal. And in the More in Common study, nearly half of Latinos argued that “many people nowadays are too sensitive to how Muslims are treated,” while two in five African Americans agreed that “immigration nowadays is bad for America.”

Obviously, my followers on Twitter are not a representative sample of America. But as their largely supportive feelings about political correctness indicate, they are probably a decent approximation for a particular intellectual milieu to which I also belong: politically engaged, highly educated, left-leaning Americans—the kinds of people, in other words, who are in charge of universities, edit the nation’s most important newspapers and magazines, and advise Democratic political candidates on their campaigns.

So the fact that we are so widely off the mark in our perception of how most people feel about political correctness should probably also make us rethink some of our other basic assumptions about the country.

It is obvious that certain elements on the right mock instances in which political correctness goes awry in order to win the license to spew outright racial hatred. And it is understandable that, in the eyes of some progressives, this makes anybody who dares to criticize political correctness a witting tool of—or a useful idiot for—the right. But that’s not fair to the Americans who feel deeply alienated by woke culture. Indeed, while 80 percent of Americans believe that political correctness has become a problem in the country, even more, 82 percent, believe that hate speech is also a problem.

It turns out that while progressive activists tend to think that only hate speech is a problem, and devoted conservatives tend to think that only political correctness is a problem, a clear majority of all Americans holds a more nuanced point of view: They abhor racism. But they don’t think that the way we now practice political correctness represents a promising way to overcome racial injustice.

The study should also make progressives more self-critical about the way in which speech norms serve as a marker of social distinction. I don’t doubt the sincerity of the affluent and highly educated people who call others out if they use “problematic” terms or perpetrate an act of “cultural appropriation.” But what the vast majority of Americans seem to see—at least according to the research conducted for “Hidden Tribes”—is not so much genuine concern for social justice as the preening display of cultural superiority.

For the millions upon millions of Americans of all ages and all races who do not follow politics with rapt attention, and who are much more worried about paying their rent than about debating the prom dress worn by a teenager in Utah, contemporary callout culture merely looks like an excuse to mock the values or ignorance of others. As one 57- year-old woman in Mississippi fretted:

The way you have to term everything just right. And if you don’t term it right you discriminate them. It’s like everybody is going to be in the know of what people call themselves now and some of us just don’t know. But if you don’t know then there is something seriously wrong with you.

The gap between the progressive perception and the reality of public views on this issue could do damage to the institutions that the woke elite collectively run. A publication whose editors think they represent the views of a majority of Americans when they actually speak to a small minority of the country may eventually see its influence wane and its readership decline. And a political candidate who believes she is speaking for half of the population when she is actually voicing the opinions of one-fifth is likely to lose the next election.

In a democracy, it is difficult to win fellow citizens over to your own side, or to build public support to remedy injustices that remain all too real, when you fundamentally misunderstand how they see the world.

Yascha Mounk is a contributing writer at The Atlantic, an associate professor at Johns Hopkins University and a Senior Fellow at the German Marshall Fund. He is the author of The People vs. Democracy: Why Our Freedom Is in Danger and How to Save It.