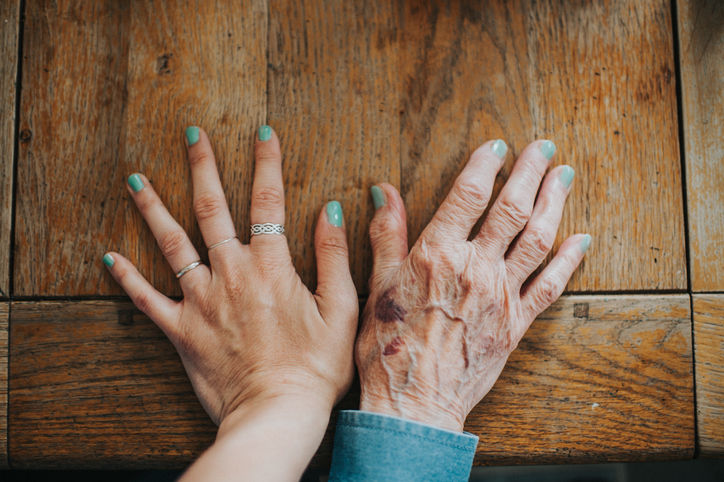 Research suggests it is possible to slow or even reverse aging, at least in mice, by undoing changes in gene activity—the same kinds of changes that are caused by decades of life in humans.

By tweaking genes that turn adult cells back into embryoniclike ones, researchers at the Salk Institute for Biological Studies reversed the aging of mouse and human cells in vitro, extended the life of a mouse with an accelerated-aging condition and successfully promoted recovery from an injury in a middle-aged mouse, according to a 2016 study published in Cell.

The study adds weight to the scientific argument that aging is largely a process of so-called epigenetic changes, alterations that make genes more active or less so. Over the course of life cell-activity regulators get added to or removed from genes. In humans those changes can be caused by smoking, pollution or other environmental factors—which dial the genes’ activities up or down. As these changes accumulate, our muscles weaken, our minds slow down and we become more vulnerable to diseases.

The study suggests the possibility of reversing at least some of these changes, a process researchers think they may eventually get to work in living humans. “Aging is something plastic that we can manipulate,” says Juan Carlos Izpisua Belmonte, the study’s senior author and an expert in gene expression at Salk. In their study Belmonte and his colleagues rejuvenated cells by turning on, for a short period of time, four genes that have the capacity to convert adult cells back into an embryoniclike state.

In living mice they activated the four genes (known as “Yamanaka factors,” for researcher Shinya Yamanaka, the Nobelist who discovered their combined potential in 2006). This approach rejuvenated damaged muscles and the pancreas in a middle-aged mouse, and extended by 30 percent the life span of a mouse with a genetic mutation responsible for Hutchinson–Gilford progeria syndrome, which causes rapid aging in children.

Because the Yamanaka factors reverse changes made to gene regulators, some scientists see the study as further evidence that aging is driven by epigenetic changes. “I do think that epigenetic reprogramming is the ultimate way to reverse aging,” says David Sinclair, a Harvard University geneticist and anti-aging researcher who was not involved in the study but is doing similar work. “My lab has a lot of evidence that the primary driver of what we call the hallmarks of aging is the epigenetic change.” Sinclair says his lab is preparing a paper explaining what causes these changes as we age.

The Salk study was conducted on middle-aged mice. But in theory, reprogramming epigenetics should work on mice and people at any age, says first author Alejandro Ocampo, adding that even cells from human centenarians could eventually be rejuvenated. He and Belmonte say they think they can improve the efficiency and results of the technique with more research—and that they can undo the epigenetic changes responsible for aging by using easier-to-handle chemicals instead of the Yamanaka factors, hopefully moving toward the possibility of treatment for people.

Matt Kaeberlein, a molecular biologist at the University of Washington who studies aging but was not part of the work, says other researchers have found that the Yamanaka factors can rejuvenate cells—so in some ways this study is not surprising. But Kaeberlein says no one else had yet shown that the factors can treat age-related diseases in an animal by making the same changes. “That’s the wow factor,” he explains.

Kaeberlein says the study suggests it may be possible not just to slow aging but to actually reverse it. “That’s really exciting—that means that even in elderly people it may be possible to restore youthful function,” he says. Plus, it is easier to imagine a treatment that makes changes to the epigenome than to consider going into every cell and changing its genes. He also notes that the results of the new study are very similar to those seen when senescent cells—those that have lost function due to aging—are removed from an organism. It is not yet clear, he says, whether “this is another way to shut down or maybe reprogram senescent cells.”

Manuel Serrano, an expert on senescence at the Spanish National Cancer Research Center in Madrid, was not associated with the new research but says he is impressed with the study and its results. “I fully agree with the conclusions. This work indicates that epigenetic shift is in part responsible for aging, and reprogramming can correct these epigenetics errors,” he wrote in an e-mail. “This will be the basis for future exciting developments.”

The study also showed how fine the line can be between benefit and harm. When the researchers treated mice continually, some developed tumors and died within a week. When the scientists cut the treatment to two days out of seven, however, the mice benefited significantly. Sinclair says this should be taken as a note of caution by anyone trying to increase the human life span. “We’ve all been playing with fire,” he says, adding that this fine line will make it challenging to get a drug approved by regulatory agencies. “This is going to be what we spend the next 10 years figuring out: how to reprogram cells to be young again without taking it too far so they become tumors.”

Both Sinclair and Kaeberlein say they wish Belmonte’s lab had shown that a normal mouse could live longer after the gene tinkering—instead of just reversing an aging-related illness.

Belmonte, like some other anti-aging researchers, says his initial goal is to increase the “health span”—the number of years that someone remains healthy. Extending life span, the number of years someone remains alive, will likely take longer to achieve. Most major killers, including heart disease, cancer and Alzheimer’s, are diseases of aging that become far more common past middle age. “This is not just a matter of how many years we can live but how well we can live the rest of our life,” Ocampo says.

Belmonte says his team is also trying to determine if aging is a process that occurs simultaneously throughout the body. Or, as he puts it, “Is there some tissue that regulates aging—and when that goes bad, the entire organism goes bad?” He says they currently think the brain’s hypothalamus—known as the seat of control for hormones, body temperature, mood, hunger and circadian rhythms—may also act as a regulator of aging.

Other approaches that have been discovered to have anti-aging benefits in animals include calorie restriction, the drug rapamycin and parabiosis—the practice of giving old mice a blood supply from younger ones. The fact that these diverse strategies all seem to work suggests there may be more than one way to age, and that multiple complementary therapies may be needed to significantly extend longevity, Kaeberlein says.

Some compounds such as resveratrol, a substance found in red wine that seems to have anti-aging properties in high concentrations, appear to delay epigenetic change and protect against damage from epigenetic deterioration, Sinclair says. These approaches can reverse some aspects of aging, such as muscle degeneration—but aging returns when the treatment stops, he adds. With an approach like the one Belmonte lays out in the new study, theoretically “you could have one treatment and go back 10 or 20 years,” he says. If aging starts to catch up to you again, you simply get another treatment.

“This work is the first glimmer that we could live for centuries,” Sinclair says, adding that he would happily do so himself: “Forty-seven years went by pretty quickly.”