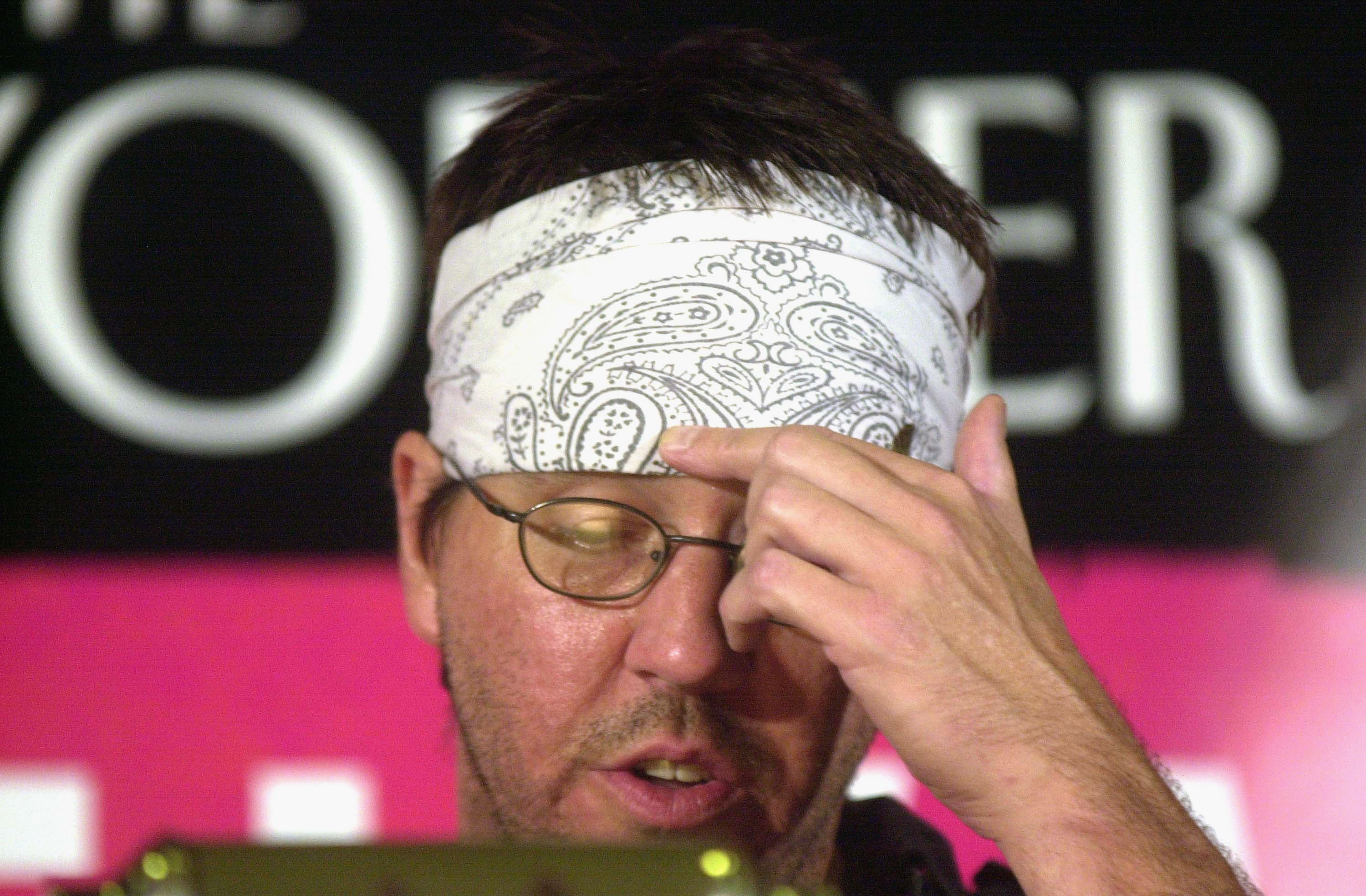 Last week I was thinking about David Foster Wallace’s 2006 profile of Roger Federer in The New York Times’ ill-fated sports-themed Play magazine, and decided to reread it for the first time in a while. Though Wallace’s controversial reputation has rightfully been re-examined in recent years, the profile was the rare occasion of a great writer meeting a great athlete at their peak. Today’s elite athletes are more likely to be chronicled by medium-talent stenographers, release content on their own platforms, or go to athlete-friendly publications. Wallace didn’t have a ton of access — there’s just a short interview with Federer, buried halfway through the piece — but he had the freedom to Go For It. As Federer has only become increasingly canonized as the greatest of all-time tennis player, the piece survives as an artifact of a rare journalistic moment in which everything fell into place.

Given that slim access, “Roger Federer as Religious Experience” is structured more like a reflective essay. It begins with Wallace explaining his theory of “Federer Moments,” AKA the instances in which the tennis player did something so athletically improbable all you could do was gawk. “The Moments are more intense if you’ve played enough tennis to understand the impossibility of what you just saw him do,” he writes. “We’ve all got our examples. Here is one.” What follows is a 411-word explanation of a point played during the final set of the 2005 U.S. Open championship match between Federer and Andre Agassi, which culminates with a Federer Moment — “It was impossible. It was like something out of The Matrix.” — and Wallace’s stunned reaction.

The point, as described in explicit detail by Wallace, comes off as the perfect representation of Federer’s singular skill. There’s also no physical recording of its existence. Inspired by the piece, I went to YouTube to see if I could find the highlight, as I do with many amazing sports moments. After spending a chunk of time rewinding through the match’s final set, I stumbled across the closest thing that fit Wallace’s criteria (“Federer serving to Andre Agassi early in the fourth set… a medium-long exchange of groundstrokes… what Federer now does is somehow instantly reverse thrust and sort of skip backward three or four steps, impossibly fast, to hit a forehand out of his backhand corner”). You can watch the point for yourself, and conclude that it bears only a passing resemblance to what Wallace describes.

In the video’s comments sections are Federer (and Wallace) fans who’d also had their curiosity piqued by the article’s vivid descriptions and were summarily let down: “Seems disappointing, but it's probably got something to do with that Wallace was a world class writer.﻿” “Does not look at all as the point described by David in his NYTimes article.” “Can't see any running towards the centre but whatever. Nice article on the Swiss genius nevertheless.﻿” “DFW's description of it was indeed a hyperbole. Disappointed.﻿”

The piece is still worth reading for all of Wallace’s non-reported observations about Federer, but there is a certain diminished feeling upon realizing that he so passionately described something that likely did not happen. This also brings up an interesting journalistic conundrum: if Wallace took so much liberty in describing this seemingly fictional instance, what about everything else in the piece? Is it fiction or non-fiction? Can we trust anything Wallace has ever written under the banner of the latter?

(Take the picture-perfect eavesdropped anecdote ahead of Federer’s Wimbledon match with Rafael Nadal: “A British sportswriter, exulting with his mates in the press section, says, twice, ‘It’s going to be a war.’”)

Then again, it’s not difficult to understand how Wallace might have gotten this wrong. The piece was written when YouTube was still a young platform; fans were unable to easily relive their favorite sports memories. Moreover, the Federer-Agassi match was almost a year old by the time the story ran. One can imagine a world-class writer subconsciously choosing to half-imagine an event in describing it, empowered by their brute-force talent and the knowledge that nobody was really going to be able to immediately call him out on it. (Letters to the editor take a while to publish; blogs were disorganized and more marginal than the real-time Twitter commentariat, which demands instantaneous accountability.) And that’s taking the charitable view that the match “just sort of happened that way,” as opposed to the more insidious possibility that Wallace intentionally made shit up in order to serve the purpose of his story.

Such journalistic lenience would be difficult if not impossible to pull off today. For one, we have the behemoth public records of YouTube and Twitter, which would no doubt contain footage from multiple angles of the moment in question. Fact-checkers at the Times — were the piece fact-checked — would be able to scrutinize Wallace’s description against such footage, instead of depending on written or verbal reports of people who were there. What Wallace describes is still a great highlight; it’s just not the highlight that magically proves the point he was trying to make about Federer being a peerless, generational talent.

Many of the celebrated nonfiction writers of years past sort of, well, made a lot of shit up.

We also know that Wallace had a habit of lightly fabricating his non-fiction work. One accusation was made in 2011 by Wallace’s good friend Jonathan Franzen, who offhandedly accused Wallace of making up dialogue in his famous “A Supposedly Fun Thing I’ll Never Do Again” piece. “Those things didn’t actually happen,” he told New Yorker editor David Remnick. “You notice he never published any nonfiction in your magazine.” Franzen seemed salty about it at the time, leading plenty of people to accuse him of levying a cheap shot, but probably not as salty as he should’ve been, knowing how famous his (admittedly dead) friend had gotten as a dogged truthteller by sort of making some of it up.

This is not a habit exclusive to Wallace, but something of a controversial journalistic tradition. Many of the celebrated nonfiction writers of years past sort of, well, made a lot of shit up. Hunter S. Thompson’s writing was partially stitched together by the Rolling Stone assistants given the thankless job of transcribing his incoherent tapes. Gay Talese, perhaps the most celebrated literary journalist ever who is now canceled, didn’t use tape recorders, and may have been hoodwinked entirely on some stories. Truman Capote didn’t use recordings or notes at all while writing In Cold Blood. Joseph Mitchell wrote wholly fake profiles. Janet Malcolm fudged some quotes.

The social contract between journalist and reader — “what I am telling you strictly happened” — thus seems increasingly conditional in the case of the literary journalist, who is more incentivized to place all of their observations and reportage into an ordered narrative about what it all means. In college, I took a course called “Literary Journalism,” which makes me wince for a few reasons. First among them is how we were exposed to a wide range of great writers — including all the people I’ve mentioned today — without our professor discussing the likelihood that their work was partially fabricated. For weeks, I’d sit there thinking, “this is great material, how did they get it” without my earnest young mind considering that it was probably not as conveniently illuminating as depicted; that “they sort of made it up” was a strong possibility instead of a cynical interpretation. And yet these writers continue to be valorized.

The Wallace-Federer incident only further confirmed something I’ve been thinking about for a while, which is that it’s almost impossible for me to read any writerly journalism from the past without considering it as partially fictional due to the transgressions of its most venerated practitioners. Talese, Thompson, Wallace, and their ilk can’t possibly be passed down without the strong caveat that they were expert storytellers, not chroniclers of the truth. And while we can argue all day about “emotional truth” and “what is truth” and “what is reality, even,” it’s indisputable that the illusion of reading “journalism” is somewhat shattered when you have any reason to doubt what happened. If an ongoing American project involves revisiting events long thought settled, and reappraising our understanding of them, then it seems obvious that journalism should come up for similar re-examination.

Journalism is a crumbling business practiced by romantic idiots preparing for future careers writing “why I got out of journalism” essays. We don’t need another reason to doubt everything, but it’s impossible to think otherwise. The proof is right there, in front of us.