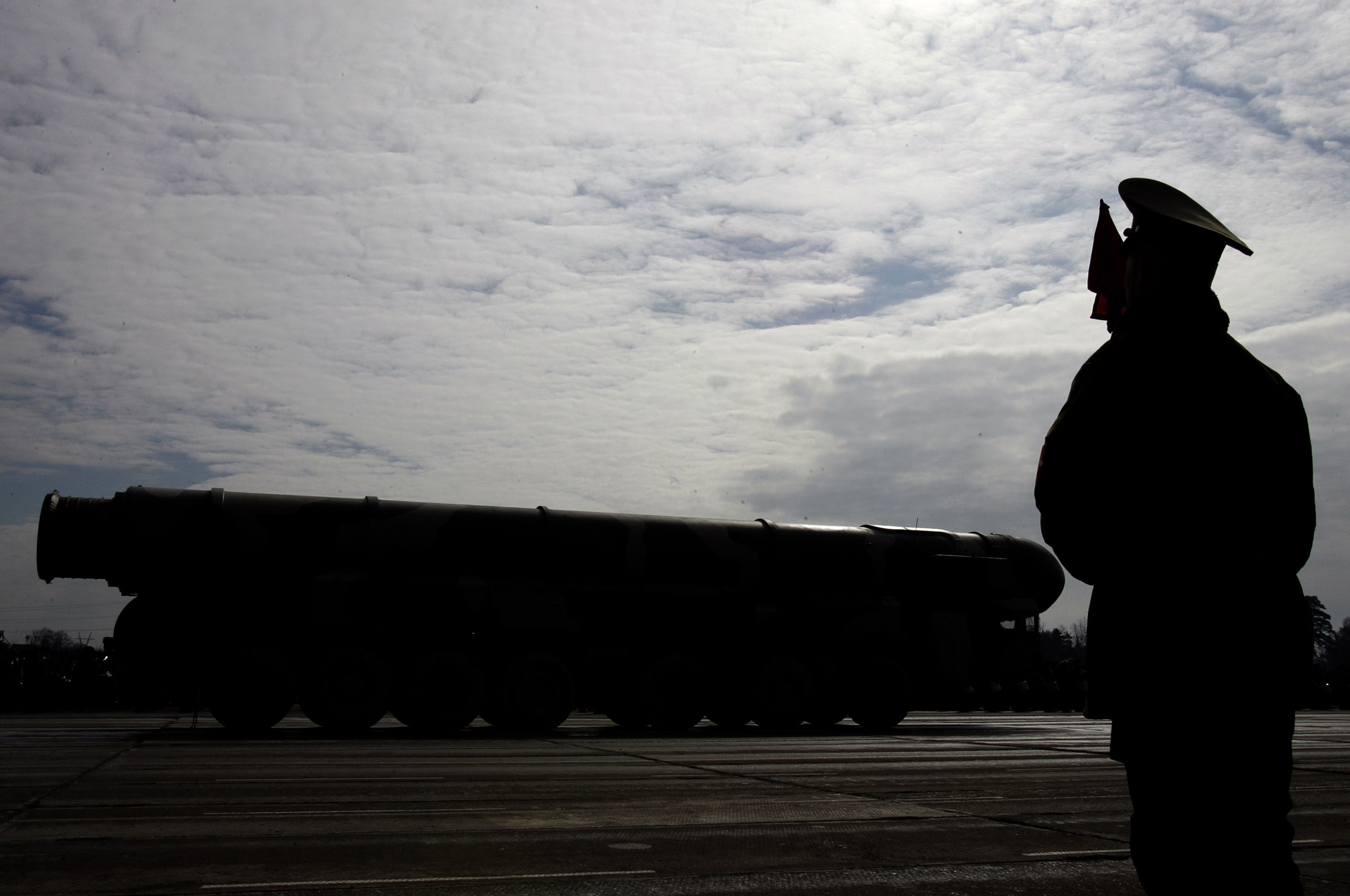 On Aug. 8, 2019, Russian authorities issued a surprising announcement. Some sort of accident had occurred during a test of a missile engine near the city of Severodvinsk, along Russia’s Arctic coast. Two people died, and there had been a brief spike in radiation detected. Soon after, images and videos appeared on social media of first responders in hazmat suits, ambulances, and a helicopter for an emergency airlift.

The reference to radiation was striking—tests of missile engines don’t involve radiation. Well, with one exception: In 2018, Russia announced it had tested a cruise missile powered by a nuclear reactor. It calls this missile the 9M730 Burevestnik. NATO calls it the SSC-X-9 Skyfall.

A nuclear-powered cruise missile is an outrageous idea, one the United States long ago considered and rejected as a technical, strategic, and environmental nightmare. Vladimir Putin’s Russia, though, thinks differently. My colleagues and I at the Middlebury Institute of International Studies—who regularly use open-source tools to monitor the state of nuclear proliferation around the world—wondered if something had gone wrong with the Skyfall. We soon discovered there was good reason to believe so.

The first thing we did was attempt to locate where the incident had occurred. Many of the reports pointed to a missile test site at a place called Nenoksa, about 18 miles up the coast from Severodvinsk. Our assumption was that the accident had occurred at the Nenoksa Missile Test Center. The facility is no secret: It is well documented in declassified intelligence reports and even marked on open-source platforms such as Wikimapia. The test center has been there since the 1960s—and, from satellite images, looks every year of its age.

But when we looked more closely at the site, we were surprised to find something new. To tell you what we saw, I have to tell you a little more about the Skyfall.

When Russia announced that it had begun testing a nuclear-powered cruise missile, Putin played a short video that appeared to show the missile in flight. At the time, we were able to use the video of the launch to geolocate the test site to the remote Arctic archipelago of Novaya Zemlya. That was no mean feat—there is not much satellite coverage that far north, half the year there is almost no light to take pictures, and much of the time it’s shrouded in clouds anyway. We once tasked a satellite to take an image of a nearby site that had been used for nuclear testing and waited as week after week the satellite passed overhead, taking picture after picture of white fluffy clouds that only Bob Ross could love. By 2018, though, we had images and were able to find the launch site and support areas. The launch site itself was very distinct—it consisted of an environmental shelter where scientists could prepare the missile prior to its launch. The shelter was mounted on rails so it could be pulled back when the team was ready to test the missile. And for some reason, all the equipment showed up in blue shipping containers.

Once we found the site, we continued to monitor it. We wanted to see if we could detect preparations for the next test of the Skyfall before it was launched. And one day, in the summer of 2018, Russia inexplicably began packing things up. There had been reports in the press that the U.S. intelligence community believed that the tests during the previous fall had all failed, with the longest one lasting a mere 22 seconds. My colleague Anne Pellegrino and I explained to NPR’s Geoff Brumfiel that we weren’t sure why Russia was abandoning the site but that it was possible Russia was going back to the drawing board with its doomsday cruise missile.

Now, here we were, staring at Nenoksa—and there it was. That very same shelter, sitting on rails and surrounded by the same blue shipping containers. Russia had constructed this new test site for the Skyfall around the same time as it was packing up the old test site on Novaya Zemlya. They had just moved the test site south. The image was sitting in Google Earth. We just hadn’t noticed.

Suddenly the fact that the engine test accident had involved radiation did not seem at all strange.

Then we noticed a second curious fact. When we looked at a satellite image of the site taken on Aug. 8, we could see several ships and some sort of platform sitting off the coast of the missile range in an area that was off-limits to commercial shipping.

As a basic safety measure, all large commercial vessels that make international journeys are required to have AIS transmitters. These transmitters periodically announce the location of a large ship, essentially helping to reduce collisions at sea. My colleague Cameron Trainer then checked a commercial database of AIS transmissions. One of those vessels inside the restricted area had its AIS transmitter turned on. And we recognized it.

The ship in question is a large cargo ship called the Serebryanka. This ship is unusual—it is owned by Rosatom, the Russian state atomic energy corporation, and it is used to transport radioactive cargoes. The Serebryanka was part of an effort in 2018 to recover a nuclear-powered cruise missile that had crashed into the ocean. “Crews will attempt to recover a missile that was test launched in November and landed in the Barents Sea,” CNBC’s Amanda Macias wrote, describing a classified intelligence report about the 2018 recovery effort. “The operation will include three vessels, one of which is equipped to handle radioactive material from the weapon’s nuclear core.” Using AIS data, we identified the ship equipped to handle radioactive material as the Serebryanka. And now, here it was, a year later, sitting at the site of the accident.

The evidence seems to point to some sort of accident during a test of the Skyfall or another nuclear-powered missile. Over the weekend, a confirmation of sorts has appeared, as Rosatom admitted that five of its employees had been killed in the accident. “The rocket tests were carried out on the offshore platform,” a Rosatom statement explained. “After the tests were completed, the rocket fuel ignited, followed by detonation. After the explosion, several employees were thrown into the sea.”

Rosatom did not, however, explain what the missile was—or what had gone wrong. The statement simply said that “there was a confluence of factors, which often happens when testing new technologies.”

Also over the weekend, a list of names of the dead has appeared on social media—all young men. My colleagues and I spent the weekend confirming that men with those names worked for Rosatom—all at the nuclear design laboratory at Sarov. We’ve also found their social media accounts where loved ones were mourning their loss. We’ve also found pictures of their lives—playing sports, going on vacations, getting married. We’ve found pictures of their wives and their children. It is incredibly sad, and one has to ask: Was this stupid missile worth getting these young men killed?

The United States and Russia seem to be drifting into a new arms race, either out of some bizarre nostalgia or because no one can think of anything better to do. The Trump administration’s 2018 Nuclear Posture Review talks about the return of great-power competition as though that’s an exciting development and calls for a vast modernization of the United States’ nuclear arsenal. Russia is investing billions of rubles in its own modernization, with a myriad of bizarre weapons under development to defeat U.S. missile defenses, including this nuclear-powered cruise missile. And on the sidelines, nitwits like the New York Times’s Bret Stephens are cheering it all on with nonsense like “The U.S. Needs More Nukes.”

When we think about the dangers of the arms race, we think about the possibility of a civilization-ending cataclysm. But even though the Cold War didn’t end in wide-scale catastrophe, it still resulted in a series of small-scale catastrophes for many of the people who lived it. Ask environmentalists in Russia about the costs of the nuclear arms race or the people who live near Rocky Flats, Hanford, or countless other sites in the United States. Sometimes we are so focused on the horrific things that we narrowly avoided during the Cold War that we forget all the horrific things that actually did happen. The sorts of things that often happen, as Rosatom noted so coldly, “when testing new technologies.”

There are human beings out in the real world who will bear the costs of this arms race. Here are five of those people. Five people whose parents, spouses, and children will never see them again. Is that worth it? I don’t think so. No, the United States does not need more nukes. And no, Russia does not need new ones. Not as much as wives need their husbands or children need their fathers.