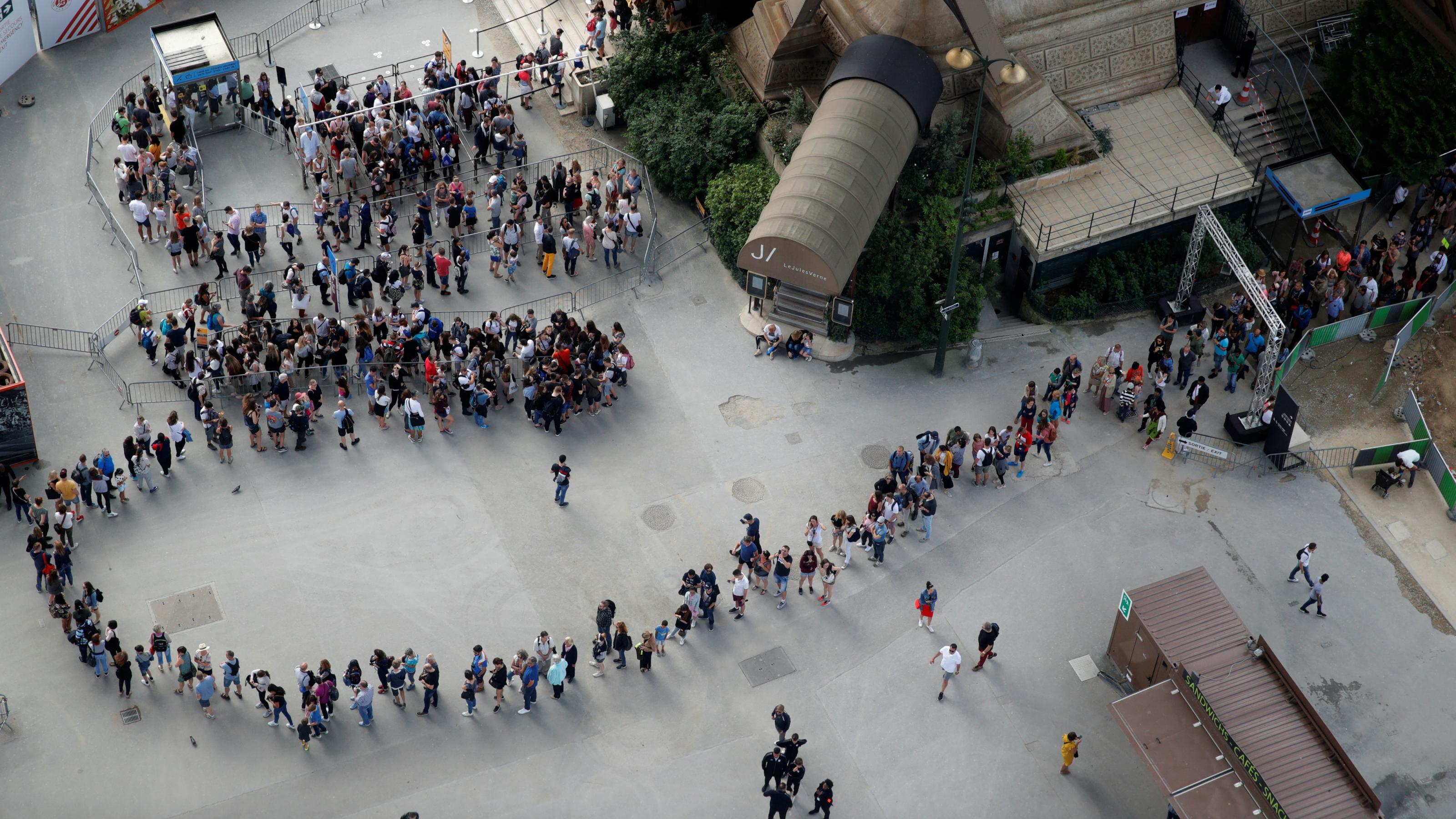 Queuing is global, but the way we stand in line depends on where—and who—we are.

The UK, a country that prides itself on its orderly queuing, is home to one of the most famous queues in the the world, The Queue (proper noun, mind you). At Wimbledon’s annual two-week tennis tournament, this iconic ticket queue comes with its own 30-page rulebook (pdf). From the maximum size of your bag to the type of vessel you can sip your Pimms from, the guide leaves no question of etiquette to chance.

Other queuing protocols around the world aren’t so crystal clear. That’s why we asked Quartz reporters and editors for their insights, tips, and anecdotes about the customs of standing in line in the countries they cover or have lived. 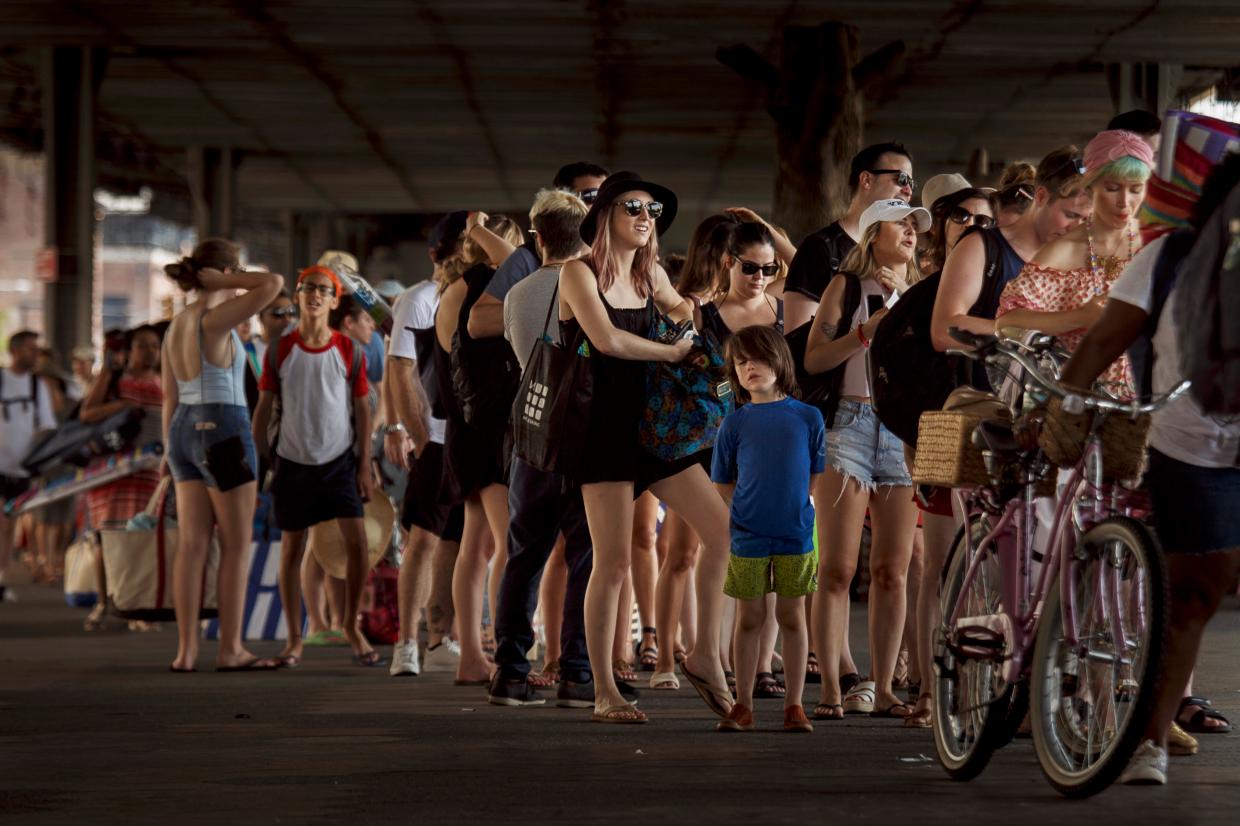 Given the country’s reputation for orderliness and playing by the rules—including pedestrians waiting dutifully at red traffic lights even if there are no cars to be seen for miles—Germans can be surprisingly bad at queuing. It’s often unclear where the end of the line is in a German store, but do your best to find it or expect to be openly and embarrassingly reprimanded by other queue standers along with a wave of “tsk-tsk” mutterings.

Supermarket queuing is a bit of a free-for-all, with people barging past each other to get their goods on the belt first. Likewise, when it looks like a new register is opening up, there’s a palpable tension while everyone figures out whether to stay put or to grab their purchases and charge to the front of the new line. —Jill Petzinger, a Germany-based reporter

Standing in line when it’s hot requires a special kind of stoicism. You would think the heat would increase the distance between queue members, but that’s seldom the case in Latin America. So you must endure the wait in close proximity of other sweating bodies. Well-prepared queuers know to carry a foldable fan, which usually draws looks of envy from the rest of the line. If you didn’t plan ahead, your best bet is to dig a random piece of paper from your purse or pocket to fashion into a makeshift version to move the air, however slightly, between you and your line-mates. —Ana Campoy, reporter

Queueing in mainland China reveals stark generational differences. Older people have experienced a planned economy and the shortage of basic supplies, so for them queueing works more in spirit, as part of the government propaganda to build a civil society. The reality, however, rewards boldness. Many operate under the presumption that everyone, given the opportunity, will always cut the line. And if you don’t act first, you will be left taken advantage of. Queues in front of a bus stop or at a popular local bakery can quickly devolve into chaos when one person cuts the line.

Meanwhile, queues at popular destinations for the younger generation tend to be more orderly. People will wait for hours at the opening day of the world’s largest Starbucks store in Shanghai, for the release of a new iPhone, for their favorite singer’s concert. Young people rarely share their parents’ worry about being the last in line and left without food to bring back home. —Youyou Zhou, Things reporter 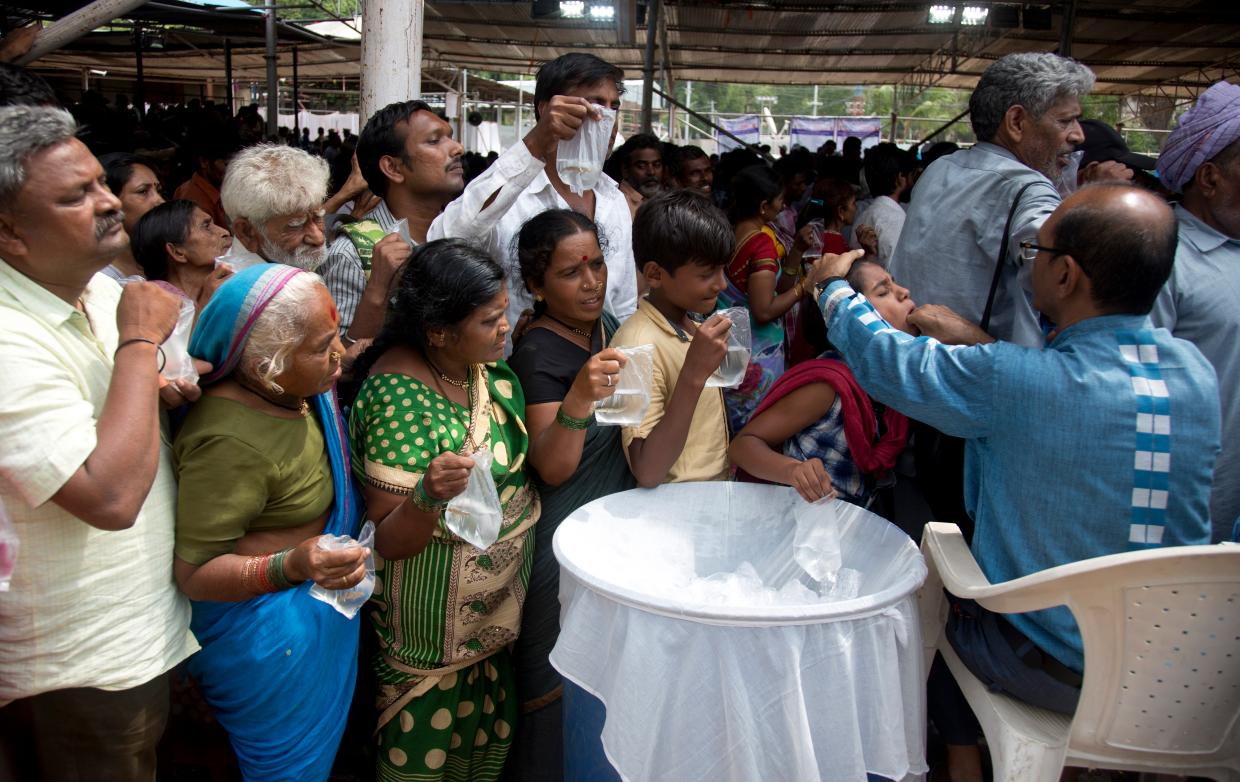 Photo by AP/Mahesh Kumar A.

There are many queuing philosophies in India, as you’d expect from the diversity of the country. I’d like to tell you about one that I cannot stand. It’s best illustrated with an incident I recall from a few months ago, when I was waiting in the Delhi international airport’s immigration queue.

As soon as I got in the line, a large, pot-bellied man came up behind me. I was carrying a backpack, and I felt someone touch it. I turn around and the guy has pushed his belly into it. I’ve had this happen to me enough times before to recognize the invading-your-private-space queuing philosophy, and I thought I knew the remedy. I turned 90 degrees and continued reading my phone. Within seconds, the man had moved again and now his belly was touching my elbow. There was no change of expression on his face. Game over.

For the next 20 minutes, I had to deal with the fact that I wasn’t just carrying a backpack—I was also holding up a man’s belly. —Akshat Rathi, science reporter

In a superdense city where spaces are tiny, there are lines everywhere: for taxis and mini-buses, and just as long for hole-in-the-walls as for fancy restaurants. But people actually really respect the line here, and they move much faster than you’d think—so you should rarely think twice about getting in a long queue here. —Tripti Lahiri, Asia bureau chief

Americans stand in plenty of lines, but in a large country of immigrants, it’s perhaps unsurprising that queuing philosophies vary widely—not just regionally or by culture, but also on a more granular level. Queuing for an Amtrak train is very different from queuing at the post office, and neither compare with queuing for groceries at Trader Joe’s. Is saving a spot in line frowned upon? Can you step away for a moment and then resume in the same spot in line? Is it appropriate to chat on the phone in line? Your best bet is to look around and do what others do. And bring a book. —Indrani Sen, culture editor

Lulling you into a false sense of security, queues definitely form in Malaysia. But more often than not, they then descend into a quiet free for all. To fend off usurpers requires some feistiness. Whether it’s to get a bowl of laksa at the hawker stall or ask advice at an info desk, you better be prepared to fight your way to the front (quietly) without losing your mind. —Lianna Brinded, Europe editor 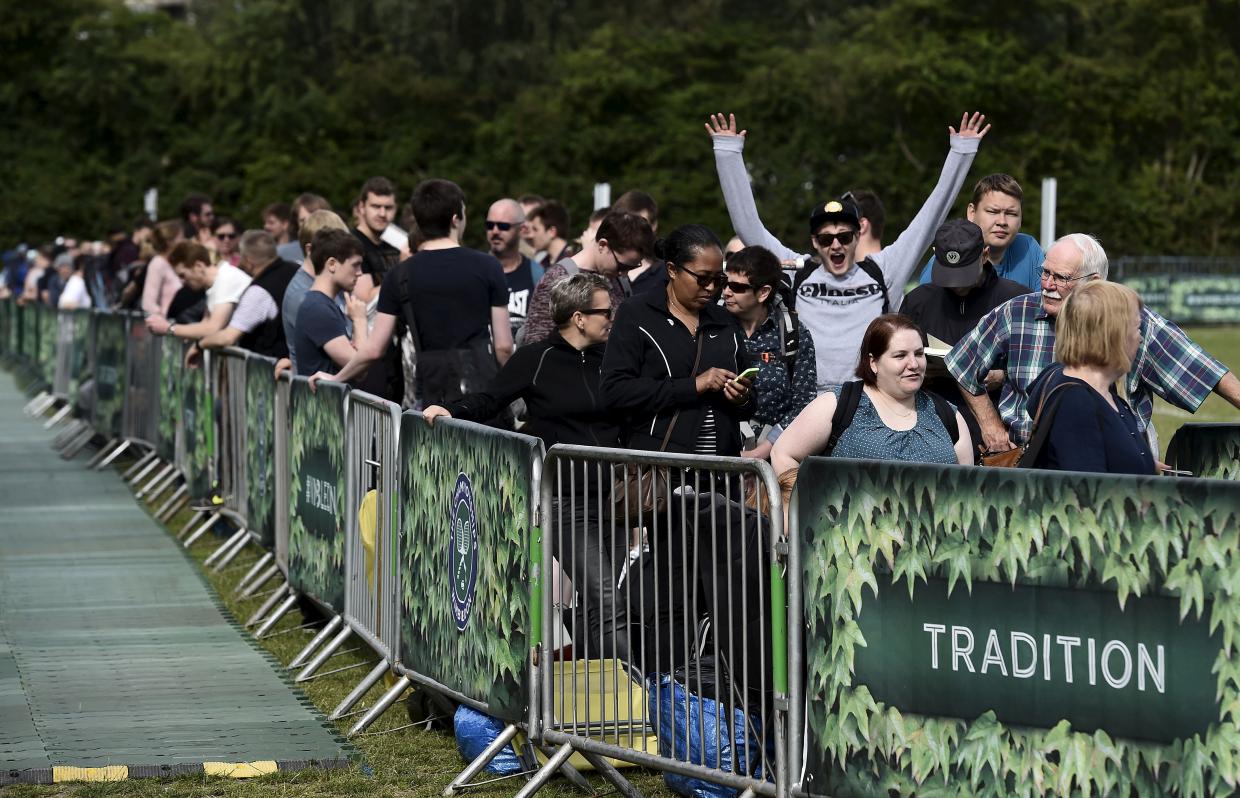 Younger generations of Poles frequently hear from their parents and grandparents about how good they have it: They don’t have to stand in five-hour long queues just to get basic household products such as toilet paper. That’s what they were forced to do in the scarce times of Communist rule in the country. Lines were such a big part of life in that era that a government research agency in 2011 put out a board game called “Queue,” a wildly popular, twisted version of “Monopoly,” where the objective is to get all the products on your shopping list.-Hanna Kozlowska, reporter

Italians think of themselves as bad at queuing. The stereotype is of a country of wild line-cutters, oblivious of the people waiting before them, and thinking of skipping ahead as a sign of intelligence. Someone jumping ahead of a line could even be accused of being the “tipico Italiano” (classic Italian)

That notion aside, bad queue behavior is actually not that common. Do people occasionally try to get ahead of their turn? Sure, but no more than they do in other countries, and they draw the appropriate ire from others waiting in line.

People will, however, be quite understanding if you have a good reason to get ahead, and you ask nicely: Whether you are late for a train and need to purchase a ticket, or are in a long supermarket line with only one or two items, you’re likely to find friendly fellow in-liners who’ll be OK with you stepping ahead of them. —Annalisa Merelli, reporter

Brazil is huge, with over 200 million people, and customs are different from region to region, state to state, city to city, and even neighborhood to neighborhood.

In São Paulo, lines tend to range between organized and a barely controlled mess—but it never quite becomes a free-for-all. In a São Paulo Starbucks line, everyone will be one arm away from each other. But in subways and trains, people are really close. There’s this constant gentle push from the person behind you.

Because it’s a major economic center, my perception is that things here are more efficient than in other major Brazilian cities. (That’s for the good and for the bad: the stereotypical Paulistano is stressed, impatient, workaholic.) —Luiz Romero, reporter based in São Paulo 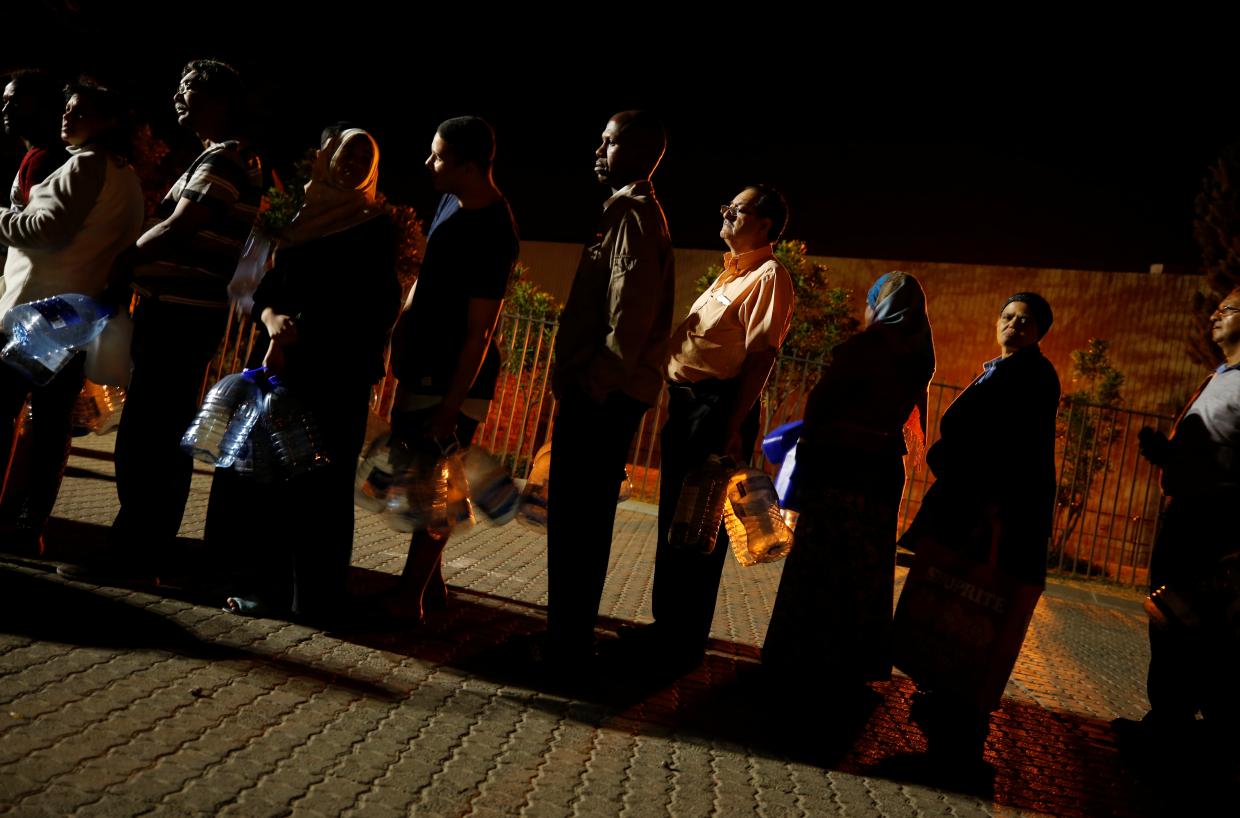 South Africans have resigned themselves to the nothingness of waiting on line. In queues, South Africans rarely distract themselves with a book or Candy Crush. Instead, with a blank look into the middle distance, most just wait. Perhaps it has to with South Africans’ casual relationship with time, or the understanding that a bureaucrat’s tea-break cannot be messed with. —Lynsey Chutel, reporter based in Johannesburg

Thailand, known for heavy-handed bureaucracy and deferential politeness, has a queueing culture all its own. People may not always respect the queue, but at least they’ll apologize as they cut past you. What the country lacks in queueing systems, it makes up for in ingenuity—like this photo of people who have deposited their shoes and books to signify their place in line while they wait for an office to open. —Adam Pasick, Push editor

In the Philippines, a queue is an indicator of social standing: those who get to the front quickly tend to be either rich or old. Those with the money pay for priority services or pay someone (like their domestic helper) to wait in line on their behalf, like a surrogate. The elderly (Filipino residents over the age of 60) also get to skip the tortuous lines. A special senior citizen government-issued ID opens express lanes in banks, movie theaters, fast food outlets, even bathrooms. The Tagalog word for queue, pila from “pile,” hints at the madcap scenario in lines and logjams. Time-sucking mobile apps like Facebook or CandyCrush have been a godsend for these idle times. —Anne Quito, design reporter

The length of a Nigerian queue is hardly ever what it seems. That’s why, when you walk into a bank and there appears to be just a few people in line, you should probably still expect a long wait. Many Nigerians book spots on queues by telling the person in front of them that they’re waiting and then, rather than stand on the queue, they take a seat and only get back on the queue just before it’s their turn to be attended to.

So when you walk in, the “last” person will be pointed out to you, if they’re sitting down. You can choose to stand in the queue if you want, knowing that when it’s their turn, they step back in front of you. If there’s a mix up and it doesn’t get pointed out early, you may try to dispute it. But then others on the queue will confirm who’s next, and everyone lives happily ever after. It just works out, most times. —Yomi Kazeem, West Africa reporter