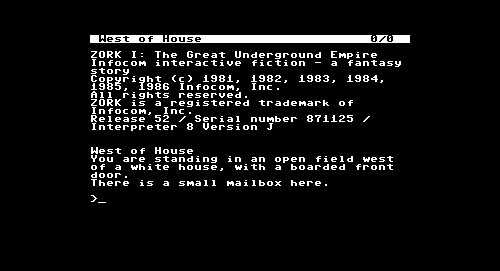 Zork is a text-based video game, a genre also known as “interactive fiction,” whose defining feature is the absence of typical video game graphics. Instead, the game’s environments and the actions you take are described for you. For example, the first line of Zork is, “You are standing in an open field west of a white house, with a boarded front door. There is a small mailbox here.” Using a series of simple commands, you direct the main character to do something, like “open mailbox.” To which the game will reply, “Opening the small mailbox reveals a leaflet.” Naturally, you would then “take leaflet,” “read leaflet”, and then maybe “walk east” to get to the house. The story unfolds from there as you collect items, like a sword, a lantern, rope, and other adventuring necessities, before entering a vast, underground cave where you’ll face enemies inspired by The Lord of the Rings, like elves, trolls, and the darkness-lurking grue.

How Old is Zork?

The young geeks got the idea for Zork from the first text-based video game, Adventure (also called Colossal Cave Adventure or ADVENT, because the computer it ran on could only use so many letters in the command line). Adventure was created in 1976 by Will Crowther, a student at Stanford, as a simulation of Mammoth Cave in Kentucky, with a few Tolkien-esque fantasy elements thrown in by fellow Stanfordite Don Woods. The MIT guys weren’t impressed with Adventure’s limited two-word command structure (“kill troll”), so they wrote Zork to understand complete sentences (“kill troll with sword”).

Most People Didn’t Have Computers Back Then, So Who Played Zork?

Originally, Zork and Adventure were both written for the PDP-10, a room-sized computer mainframe that was popular with universities in the late-1970s. Adventure was written in a very common programming language called FORTRAN, so copies of the game spread rapidly among mainframe users. Zork, however, was written with MDL, a more specialized language that wasn’t as popular. So, for a while, the only way to play Zork was to log on to the MIT PDP-10 through ARPAnet, an early version of the internet, and run it remotely. Zork was never officially announced to the world; people just heard about it through ARPANet, making it an early viral sensation.

Just as home computers were becoming more commonplace, a commercial version of Zork was released by Infocom, a company founded by Anderson, Lebling and Blank. However, they didn’t initially intend to sell Zork. They set out to create serious productivity software for the home and business market, but when they realized they didn’t actually have any of those programs written yet, they decided Zork sales could fund their future endeavors.

Since the game was too big to operate on these early home computers, they had to break it into three parts: Zork I: The Great Underground Empire (1980), Zork II: The Wizard of Frobozz (1981), and Zork III: The Dungeon Master (1982). Although Zork was first released for the TRS-80 computer, it was eventually ported to just about every home computer, like Apple II, Atari Computers, and the IBM PC. It was a pretty big hit, selling over a million copies.

The success of Zork compelled Infocom to forget their original plan of creating business software and focus on text video games throughout much of the 1980s, releasing over 40 games across a variety of fictional genres. Of course some of these games were Zork sequels and spin-offs, like the Enchanter trilogy (1983-1985), Beyond Zork: The Coconut of Quendor (1987), and the prequel, Zork Zero: The Revenge of Megaboz (1988).

What Made Zork Such a Hit?

There are quite a few things that set Zork and other Infocom games apart from the competition. For one, Infocom games had creative, addictive puzzles and mazes that drove players batty. Some gamers even wrote Infocom letters, asking for a hint to help them get past particularly tough brain teasers. This became so common that Infocom created a monthly newsletter for fans, called the New Zork Times, where they doled out clues, but also told players about upcoming games. Later, Infocom sold Invisiclues hint books. The books were printed with invisible ink that could only be revealed with a special marker, so players could get clues as-needed without spoiling anything farther in the game.

Marketing was also a huge factor in Infocom’s success. In the early 80s, computer games were mainly sold through mail order or at specialized computer stores. Zork and other Infocom titles, though, also graced the shelves of bookstores. Readers weren’t necessarily concerned about the latest whiz-bang graphics, but they did appreciate the deeper storyline, descriptions, and characters available with Infocom titles. In fact, Infocom became so well known for its writing that when Douglas Adams, author of The Hitchhiker’s Guide to the Galaxy, was approached to adapt his novel as a video game, he said he wouldn't work with anyone but Infocom. The resulting Hitchhiker's game, released in 1984, became one of Infocom’s biggest sellers.

Finally, during the development of the 1982 mystery game Deadline, the programmers realized they couldn’t fit everything into the game. So they created a portfolio of physical items, like mock crime scene photos and police reports, and included them in the box with the game’s 5.25” floppy disks. Players remarked that these “feelies,” as they became known, added to the overall game experience, so Infocom started including them with all their titles. Sometimes feelies were useful, like maps and blueprints, while others were simply there for fun, like an empty plastic bag in the Hitchhiker's Guide game that supposedly contained a microscopic space fleet.

To capitalize on the success of feelies, new editions of the Zork games were released with items like travel brochures to fictional lands, a guide to an underground amusement park, a history of the Great Underground Empire, shares of FrobozzCo stock, and even a Zorkmid coin, the official currency of the Great Underground Empire. As you might expect, many fans purchased the Zork series all over again, just so they could add the feelies to their collection.

Is Infocom Still Around?

Sadly, no. In 1984 they finally got around to working on serious business software and released a database program called Cornerstone. The company sank a lot of money into Cornerstone’s development, but it wasn’t very well received by consumers. On the verge of bankruptcy, Infocom accepted a buy-out offer in 1986 from Activision, the company behind video game classics like Pitfall and Chopper Command. Unfortunately, due to the increased emphasis on graphics in video games, as well as poor management at Activision, Infocom was shuttered in 1989.

After closing Infocom, Activision continued to use the beloved Infocom name and Zork brand to create additional sequels, like Return to Zork (1993), Zork Nemesis (1996), and Zork: Grand Inquisitor (1997). These games were a big departure from the original text-only gameplay. The new Zorks featured extensive graphics and even full-motion video scenes starring actors, like Dirk Benedict, Rip Taylor, and Michael McKean. Hardcore Infocom fans generally don't even acknowledge that these games exist.

What Does 'Zork' Mean?

The word 'Zork' doesn’t really mean anything. It's just a nonsense word the MIT guys sometimes used as an exclamation (“Zork!”), but also as a placeholder name for a program that was still being written. However, the game was briefly called Dungeon, until TSR, the company behind Dungeons & Dragons, threatened to sue. They reverted back to Zork and the name simply stuck.

Does Anyone Remember Zork?

Just about anyone who had a computer in the early 1980s played Zork or one of its Infocom progeny. In addition, because of its mainframe origins, it was a big hit with early hackers and programmers, who included references to the game in their own programs. Zork is also a major topic of the 2010 documentary, Get Lamp, an in-depth history of the interactive fiction genre, including interviews with almost all of the major pioneers of text adventures.

Perhaps one of Zork's longest lasting legacies is the grue, a “sinister, lurking presence in the dark places of the earth,” whose insatiable appetite for adventurers is only tempered by its fear of light from a lamp. One of the most famous lines from Zork — “It is pitch black. You are likely to be eaten by a grue” — can be found referenced all over the internet, in old and new video games, and in nerdcore rapper MC Frontalot's homage to Zork, "It is Pitch Dark" (the music video even has a cameo from Steve Meretzky, one of the lead game designers at Infocom).

Can You Still Play Zork?

Thanks to the internet, good video games never die. A quick Google search will lead you to hundreds of websites that host an online version of Zork, and some even have it available for download. If you’re a modern gamer with a copy of Call of Duty: Black Ops, an Easter Egg on the main menu lets you play Zork on your Xbox, PS3, or Wii. (Bonus: If you find it, you’ll get the “Eaten by a Grue” achievement.) You can also play Zork, as well as many new interactive fiction games — yes, people still make them — by downloading the Frotz app for the iPhone/iPad.

Rob Lammle is a full-time cartographer and part-time freelance writer out of St. Louis. When he's not working, he's watching movies, reading books, podcasting about pop culture, and spending time with his family. You can follow his online adventures over at www.spacemonkeyx.com.