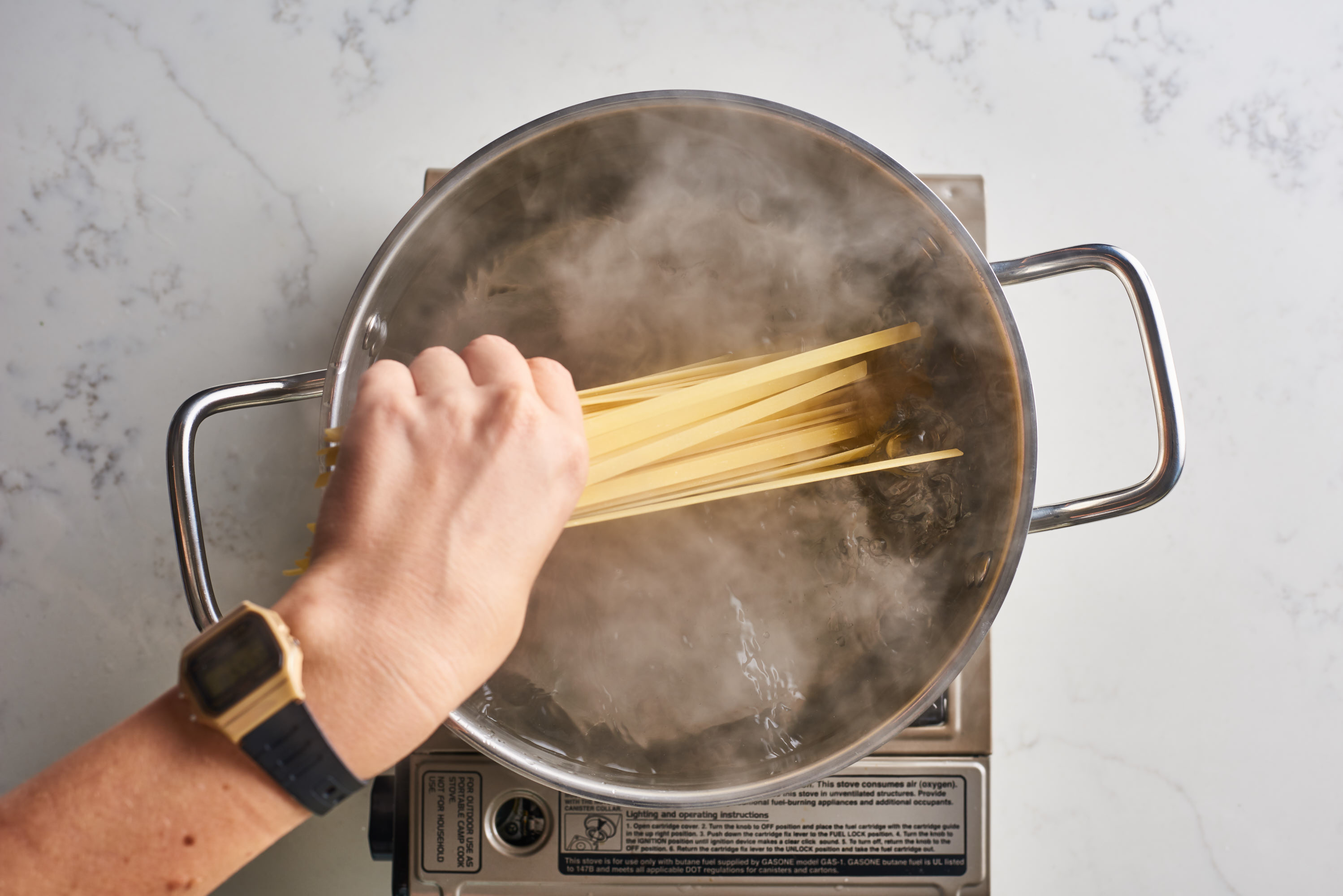 If you’re looking for someone who knows a thing or two about cooking, talk to a food scientist. They study the physics and chemistry behind how ingredients interact with each other — all in the service of making the perfect birthday cake, or whipping just enough air into a meringue. They look at food from a different perspective and question every step of the process — which is why we love turning to them for cooking advice.

Below are nine helpful cooking tips straight from certified food scientists, writers, and passionate food nerds. Some of them come from classic food-science literature (like Harold McGee’s mind-blowing On Food and Cooking). Others are from food sites run by certified food scientists like Jessica Gavin. Keep these tips in mind when you’re in the kitchen and you’ll be cooking better in no time.

1. Keep your pasta at a rolling boil during cooking.

Most people have heard that pasta should be cooked in boiling water, but thanks to a video posted by Reactions, (The American Chemical Society’s YouTube channel) we now know why. During the first few minutes in the pot, pasta rapidly releases starch into the water and becomes very sticky. When the water is kept at a rolling boil, “the pasta pieces keep moving and don’t stick to each other.” Learn more by watching the entire video here. (And if you find that your pasta water constantly stops boiling and takes a few minutes to come back up, try using more water — or adding less pasta.) 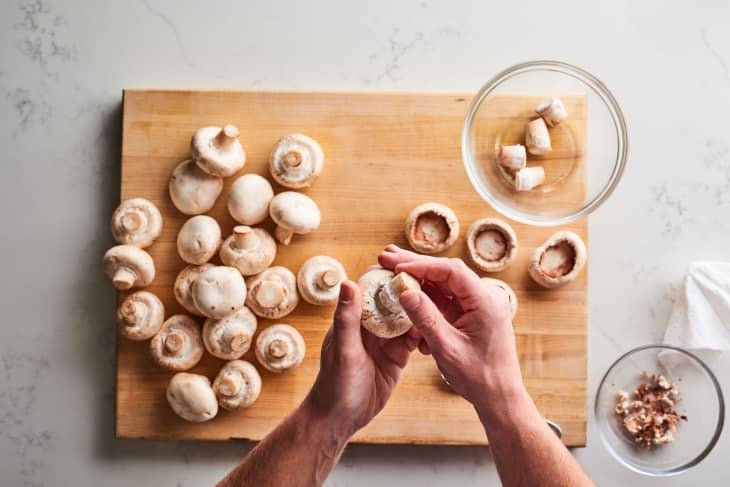 2. You can wash your mushrooms in water.

Most people are told that mushrooms absorb water, so they resort to just brushing them instead of washing them properly. But J. Kenji López-Alt, author of The Food Lab: Better Home Cooking Through Science, disproved this old myth with a bit of science. “Mushrooms do absorb water when you wash them, but it’s only about 2% of their total weight,” says Kenji. And to put that into perspective, that’s only 1 1/2 teaspoons of water per pound of mushrooms — so it’s really nothing to worry about. An additional 15 to 30 seconds of cooking time is enough to cook off that amount of water, so go ahead and wash the dirt off. 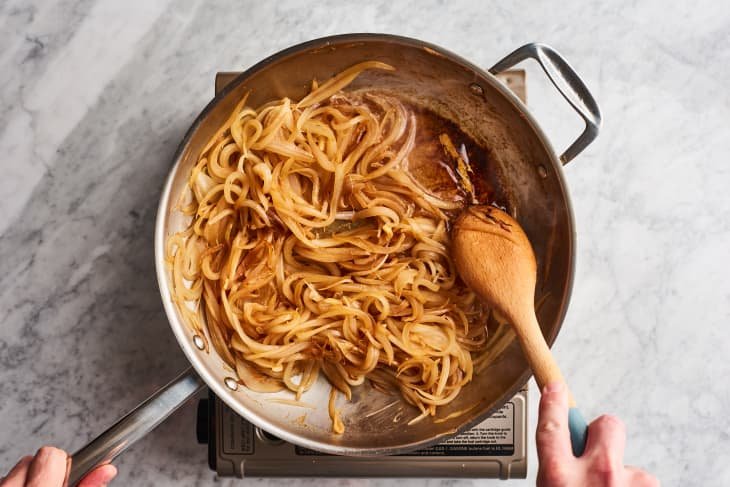 Another genius tip from J. Kenji López-Alt is to add a pinch of baking soda to onions to help them caramelize faster. “The higher the pH (i.e., the more basic or alkaline), the faster the reaction takes place,” explains Kenji. He suggests adding no more than 1/4 teaspoon of baking soda per pound of onions you’re cooking, so make sure you’re not too heavy-handed with it. Kenji also notes that onions cooked with baking soda are a tad softer — so keep that in mind as well. (Get J. Kenji López-Alt’s book, The Food Lab: Better Home Cooking Through Science, on Amazon.) 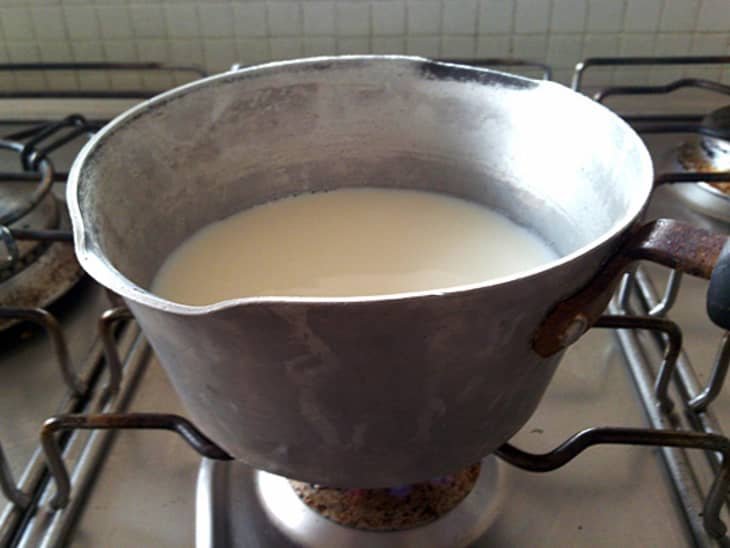 4. If a recipe calls for scalding milk, it’s for a good reason.

You might think that scalding milk is an unnecessary step for most recipes, but over on Fine Cooking food scientist and cookbook author Nicole Rees helps explain why that isn’t the case. Scalding breaks down whey proteins found in milk — which would otherwise weaken gluten in a dough and prevent it from rising properly — so, depending on the recipe, it’s actually pretty important. The next time your recipe calls for scalded milk, take the time to do it so you end up with the best quality dough. 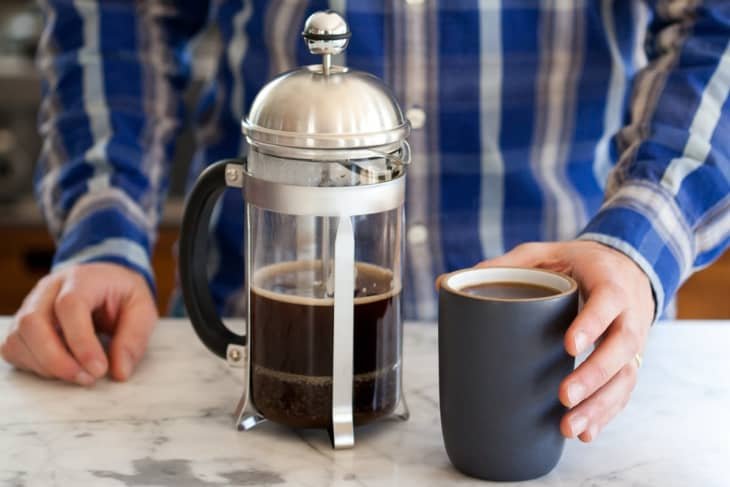 5. Add a pinch of salt to your morning coffee to make it taste less bitter.

This tip, straight from celebrity food nerd Alton Brown, comes from an old 2010 Good Eats clip in which Brown shares his tips for making the perfect cup of coffee. His trick? Adding 1/4 teaspoon of kosher salt for every six tablespoons of coffee grounds he uses. “Not only does salt cut the bitterness of coffee, but it also smooths out the ‘stale’ taste of tank-stored water,” says Brown. “I’ve taken to adding a quarter teaspoon of kosher salt to every six tablespoons of grounds.” 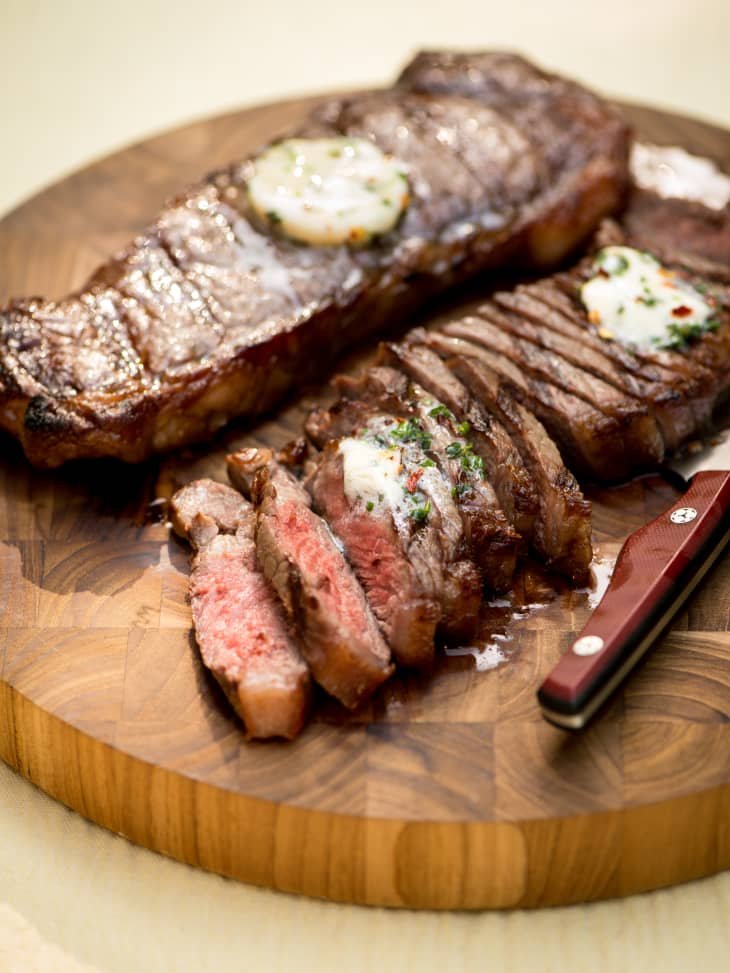 6. Always let your meat rest before cutting into it…

“When you cook meat, the muscle fibers and the proteins begin to shrink and squeeze out moisture,” certified food scientist Guy Crosby told The Institute of Food Technologists. “If you immediately slice a piece of meat, the moisture that has been squeezed out of the muscle fibers will run out.” Crosby’s solution? Letting his meat rest for 15 to 20 minutes before cutting into it. At this point the fibers will start to soak up some of the moisture, meaning less moisture loss once you slice into it. So be patient, give it time, and your steak will have a much higher chance of coming out moist. 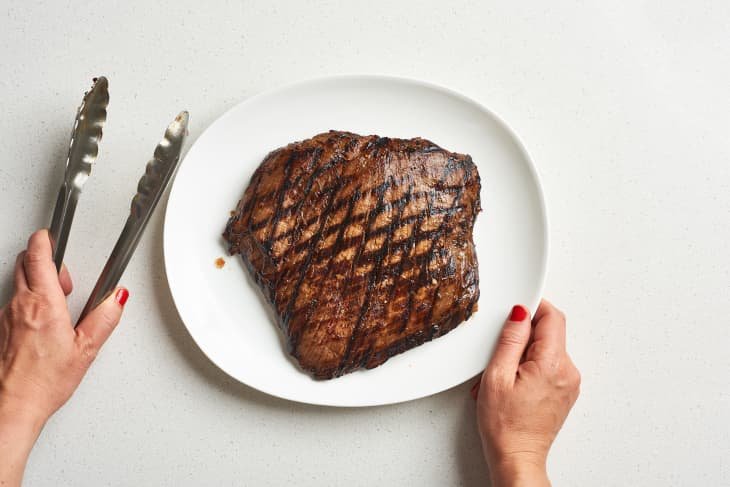 7. And don’t underestimate the power of “carryover cooking.”

Carryover cooking is the increase in temperature after your protein is removed from its heat source — and the increase in temperature can actually be significant. “Allowing your meat to rest for 10 to 15 minutes tends to increase the internal temperature about five to ten degrees,” says Jessica Gavin, certified food scientist, blogger, and author. This increase can be the difference between medium-rare and medium. Keep this in mind the next time you’re cooking an expensive cut of meat. 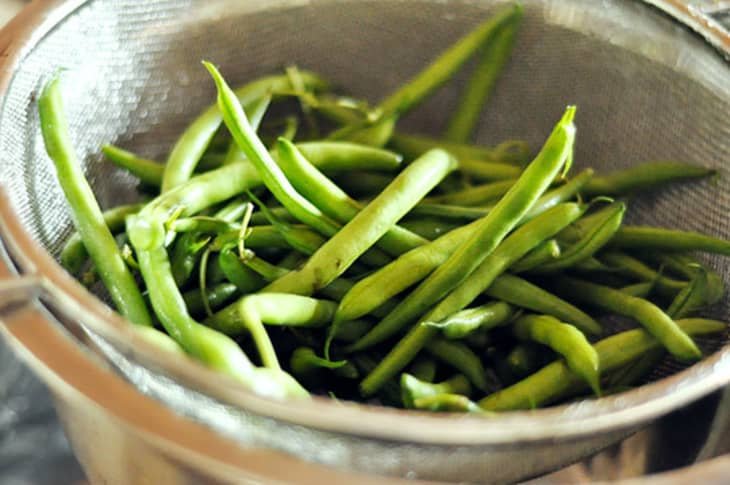 8. When blanching vegetables (like green beans), coat them in oil as soon as they come out of the water.

After blanching, your vegetables will be steaming hot — but steam means that those vegetables are “losing moisture,” says McGee. To prevent your veggies from drying out and shriveling, McGee suggests immediately tossing them in oil or butter to create a waterproof barrier that will lock in their moisture. If you’ve ever wanted picture-perfect blanched green beans, this is how you do it. You can watch the entire video of McGee explaining the science behind it here. 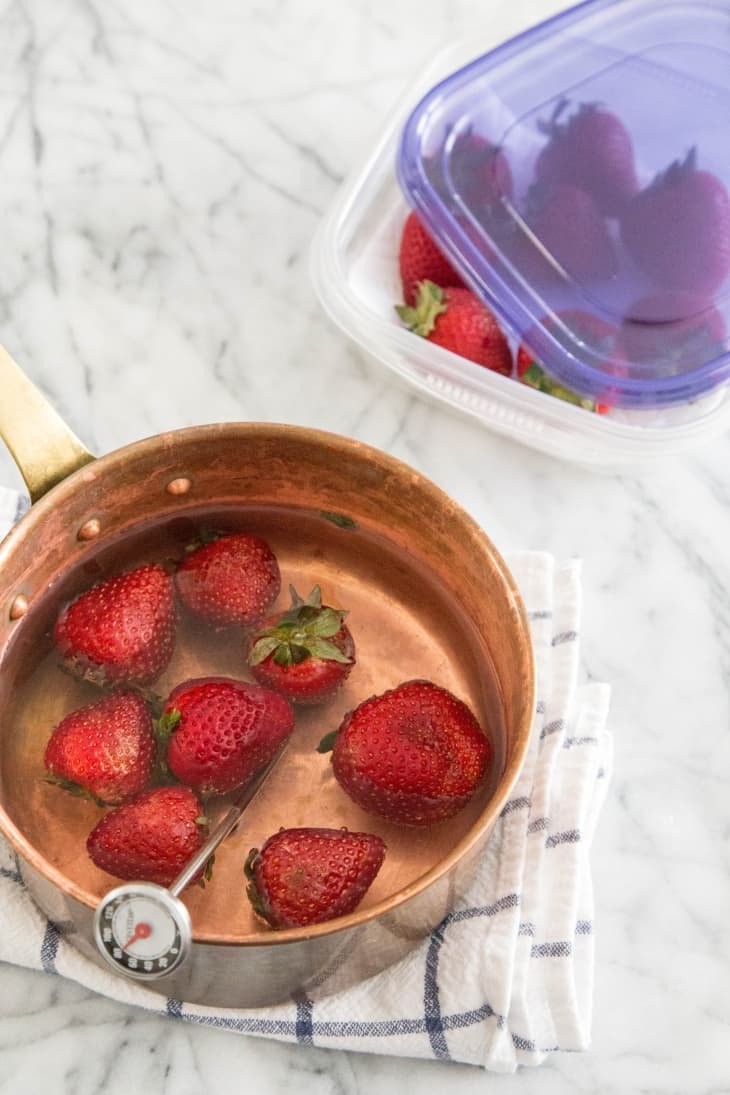 9. Soak your berries in 125°F water as soon as you get home to make them last longer.

Another genius tip from McGee is a clever technique for extending the shelf life of berries. According to McGee, hot water treatments can slow mold growth on berries — which in turn can make them last longer. So by briefly dunking berries in a pot of hot water, you can actually make them last longer. He tested the method out with various water temperatures and times and ultimately decided that 30 seconds in 125°F water was the perfect solution. So the next time you get home from the grocery store, give you berries a hot water soak. (Seriously: Get a copy of McGee’s book, On Food and Cooking: The Science and Lore of the Kitchen, on Amazon.)

Jesse Szewczyk is a Studio Food Editor at The Kitchn.