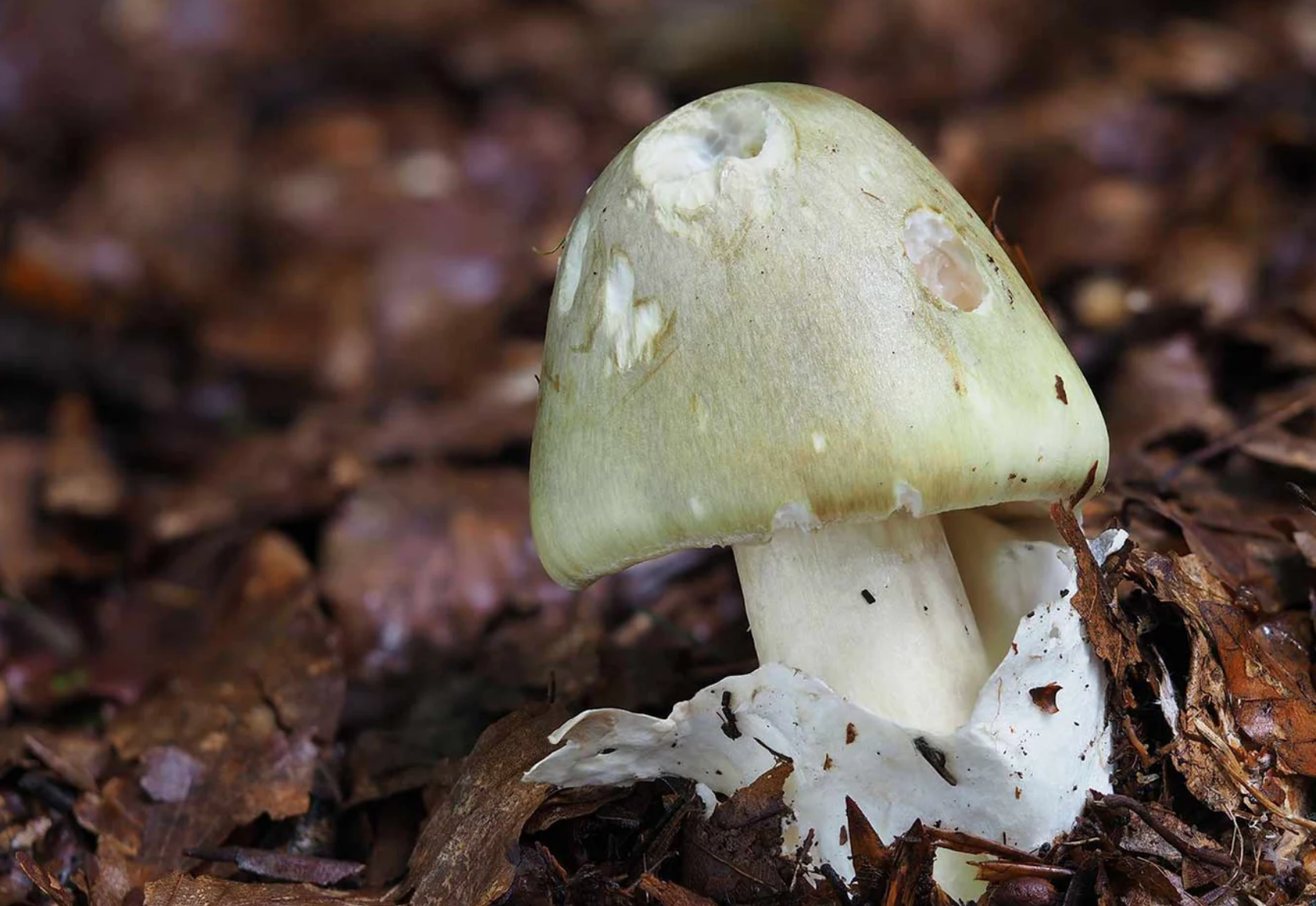 There is a commonsense rule about wild mushrooms that all outdoorsmen should heed: Avoid them. There are about 10,000 species of fungi out there, of which only a small number will kill you. From that vantage, the odds sound OK. Thing is, with the exception of a few easily identifiable species, it’s hard to tell the lethal from the good. And mushrooms have never been known for being forgiving. Often, as in the case of the aptly named death cap (Amanita phalloides), they look like a hundred other mushrooms, some of which are delicious. But do you really want to roll those dice?

Got a friend who “knows” mushrooms? Great! Just remember that you’re trusting this person with your life and that experts get poisoned, too. Regularly. I wouldn’t roll those dice either.

Here are some mushrooms you definitely want to avoid. 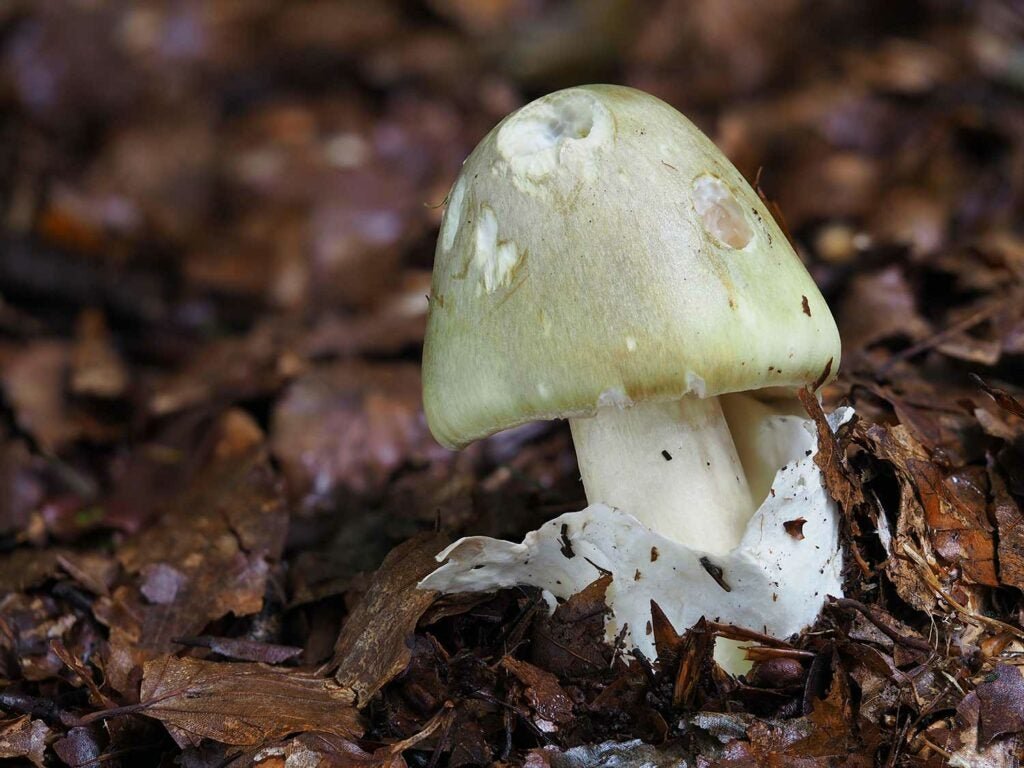 The death cap is included in every “most dangerous” list of mushrooms because it accounts for more than half of all known poisonings. Half a small one can kill an adult man. This genus of fungi is native to Europe but is increasingly showing up in North America. Death caps look like any common small, white mushroom. The poison is amanitin, which is a particularly nasty cocktail of eight other toxins found in amino acids. Famous people who may have died from eating death caps include the Roman emperor Claudis (54 A.D.) and Holy Roman Emperor Charles VI in 1740. Unlike some other mushrooms, death caps are equally deadly cooked, raw, frozen, or dried.

Symptoms occur six to 24 hours after eating and include nausea, vomiting, diarrhea, and abdominal pain. Typically—and this is the really dangerous part—you might feel alright for awhile after this, which leads to many patients being discharged from hospitals, sometimes with fatal results. The pain comes back, along with jaundice, convulsions, coma, and death. The liver and kidneys—necessary organs to your continued existence—fail. Recovery can take place in one to two weeks, but you never really get over it. 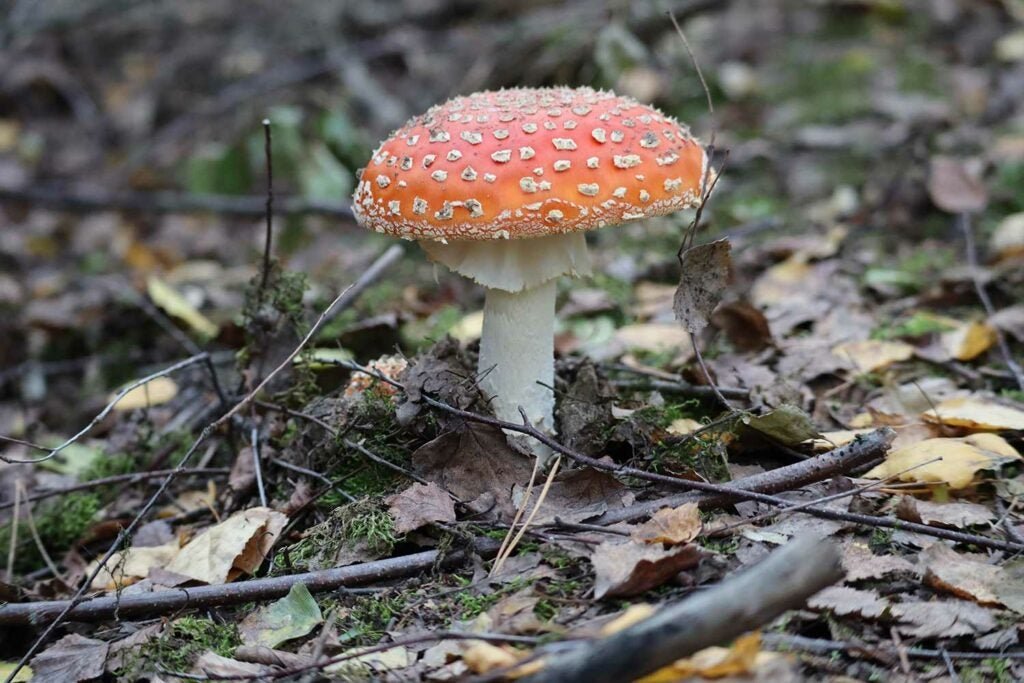 While a fly agaric mushroom probably won’t kill you, it will make you very confused. Paweł Kubicki on Unsplash

This is the one you see in fairytale books with a bright red cap and white spots. The “fly” part derives from the fact that people used to put these in milk as a way to trap and kill flies. This one has ibotenic acid and muscimol, which act on the central nervous system.

Eat one of these and you may be in for a wild ride that includes delirium, manic behavior, delusions, and convulsions. You may feel drunk and perceive small objects as very large. The symptoms appear in as little as 30 minutes and last up to four hours. The only treatment is moral support, since anything else may worsen the reaction. Reassure the victim that the poisoning is merely temporary. 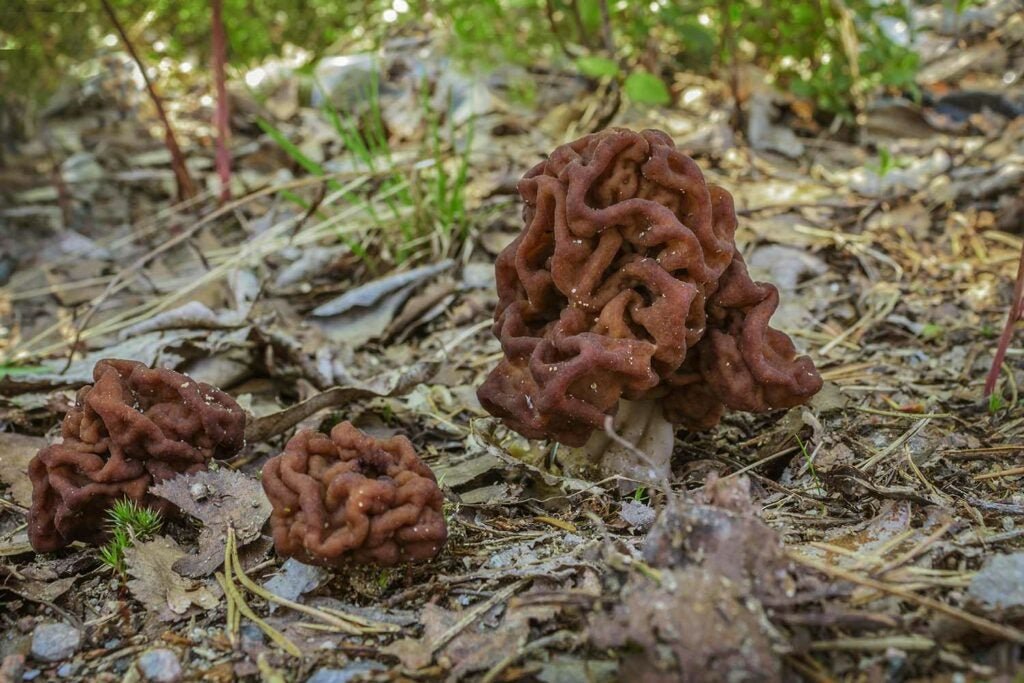 This mushroom looks like the human brain, not a morel. And yet it’s commonly mistaken for a morel. It can be fatal if eaten raw but is a particular delicacy in parts of Scandinavia and Eastern Europe when properly cooked. The culprit here is gyromitrin and MMH, which is produced when the mushroom is partially heated. MMH is also used as a propellant for rockets and is not a good thing to ingest.

Symptoms appear seven to 10 hours after eating, at which point nausea and vomiting set in, followed by abdominal pain and diarrhea. In severe cases, you die from liver damage. 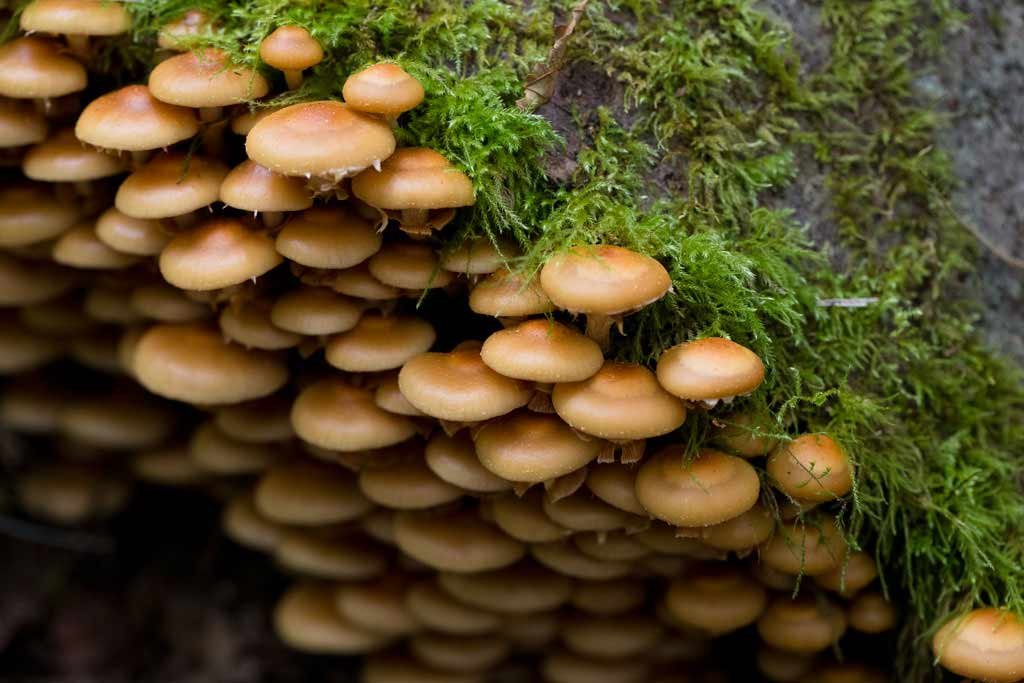 Confusing an autumn skullcap with an edible mushroom can be a deadly mistake. Peter Pearsall/U.S. Fish and Wildlife Service

As a rule of thumb, avoid anything with “skullcap” in the name. These grow worldwide, from the Arctic to Australia, on dead wood. They may be confused with some edible mushrooms, such as honey fungus.

The toxic agent here is the same amanitin found in the death cap. Hold onto your liver. 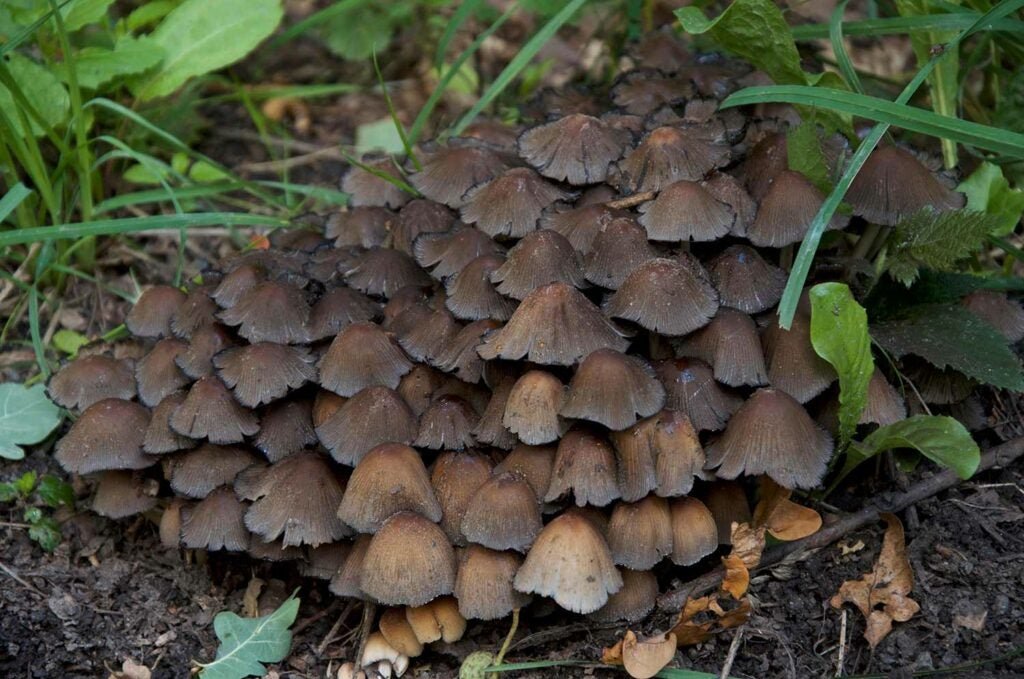 On its own, the alcohol inky isn’t harmful. But if you drink alcohol with it, you’ll start to feel the effects. Miriam Heppell/Alamy

The alcohol inky—a wonderful name for a mushroom—is a member of the inky cap family, several of which have a great distinction. They’re fine by themselves and absolute living hell if you have booze with them. This is because they contain coprine, an amino acid that interacts with alcohol.

Strictly speaking, coprine is not poisonous. What it does, however, when taken with alcohol, is exacerbate the worst symptoms of alcohol intoxication. These include flushing of the face and neck, headache, and sometimes nausea. Further, it leaves your body susceptible to alcohol poisoning. In other words, you could eat an alcohol inky cap without booze, be fine, have a drink a few days afterward, and get seriously sick. The reaction starts between 30 minutes to two hours after eating. Your pulse speeds up, you get flushed, have a headache, feel weak and dizzy, then barf. Fortunately, recovery takes place spontaneously a few hours later. 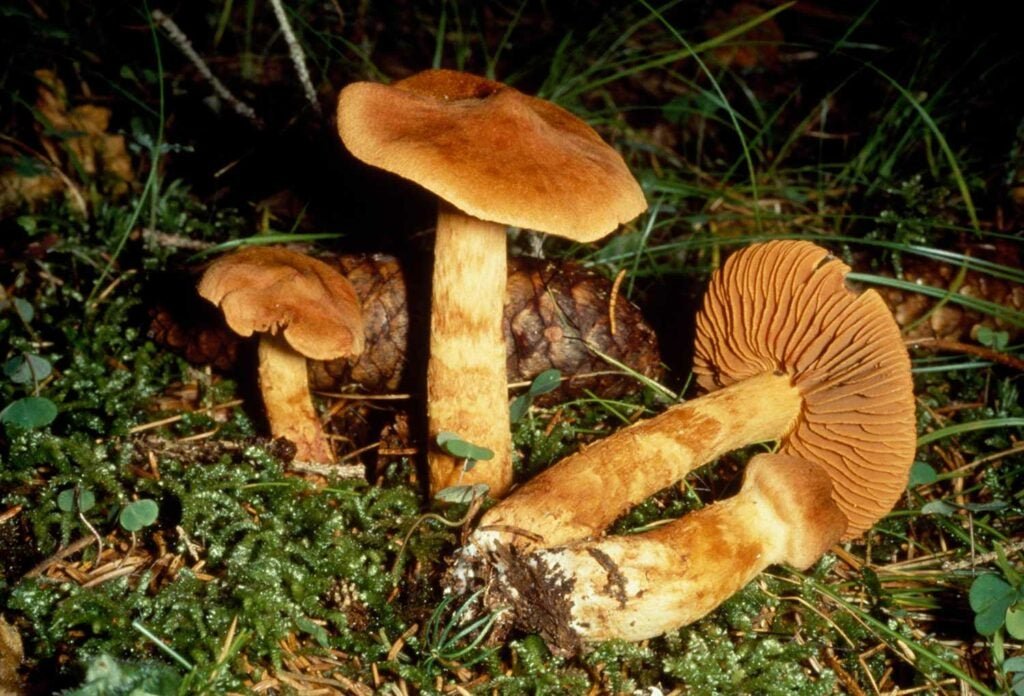 The deadly webcap can cause irreversible kidney failure, requiring victims to get a transplant or go on dialysis. Universal Images Group North America LLC/DeAgostini/Alamy

Deadly webcap is a good name for this one, which is native to North America and Europe and is especially fond of subalpine forests in, for example, Mount Rainier National Park.

If you’re a fan of kidney or liver failure, this is the way to go. It wasn’t known to be dangerous until 1972, when four people in Finland ate it, two of whom experienced “permanent” kidney failure. Seven years later, three people in Scotland mistook it for a chanterelle. Two of them required liver transplants. Nicholas Evans, who wrote The Horse Whisperer, his wife, and two family members were poisoned in 2008 when they mistook deadly webcap for ceps, an edible mushroom. All four victims eventually received kidney transplants, including his wife, who had only eaten three mouthfuls. 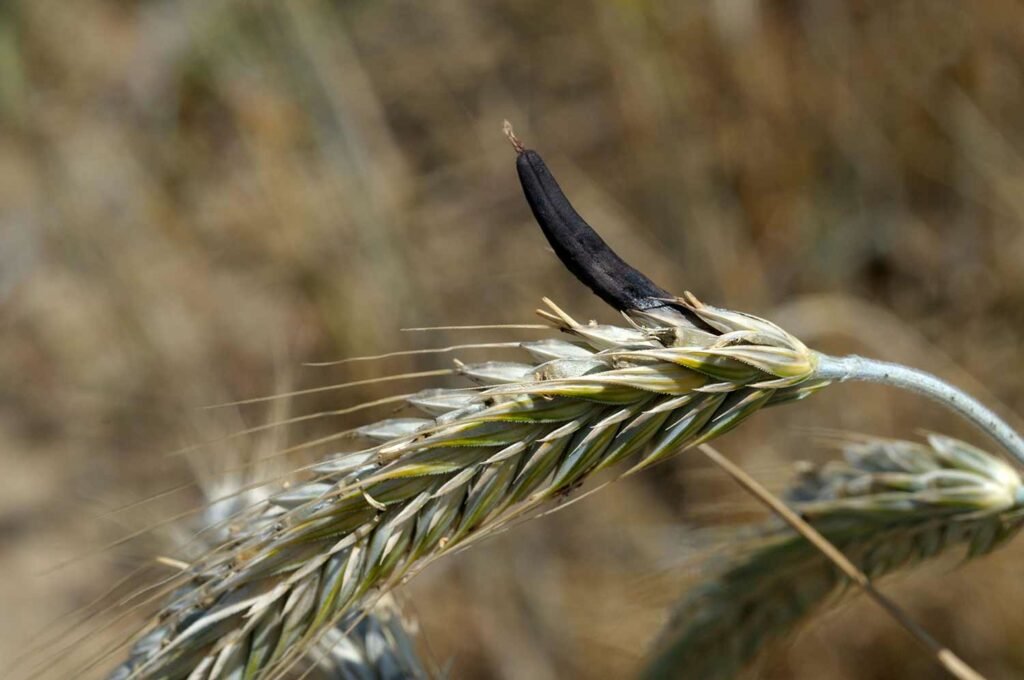 This fungus is a parasite that grows on rye and other grasses. People never willingly eat it but rather eat bread made with infected grain. In a 1976 article in Science Magazine, author, LR Caporael theorized that an outbreak of ergotism caused by Claviceps purpurea may have been the cause of the strange behavior that led to the execution of 20 men and women in the 1692 Salem witch trials. Those accused of witchcraft all had similar symptoms, including manic melancholia, psychosis, and delirium. Further, the author notes a weather period at the time that would have been conducive to the production of a lot of ergot on rye grown in the area’s lowlands.

It doesn’t hurt rye much, but it can do a number on humans, leading to cramps, spasms, diarrhea, hallucinations, and gangrene. Historically, the fungus has been implicated in epidemics that caused thousands of fatalities. In 1951, in a small town in France, people who bought bread from the local bakery developed burning sensations in their limbs, began to hallucinate that they could fly, and one boy even tried to strangle his mother. Although it was never proven, spurred rye is thought to have been the cause.