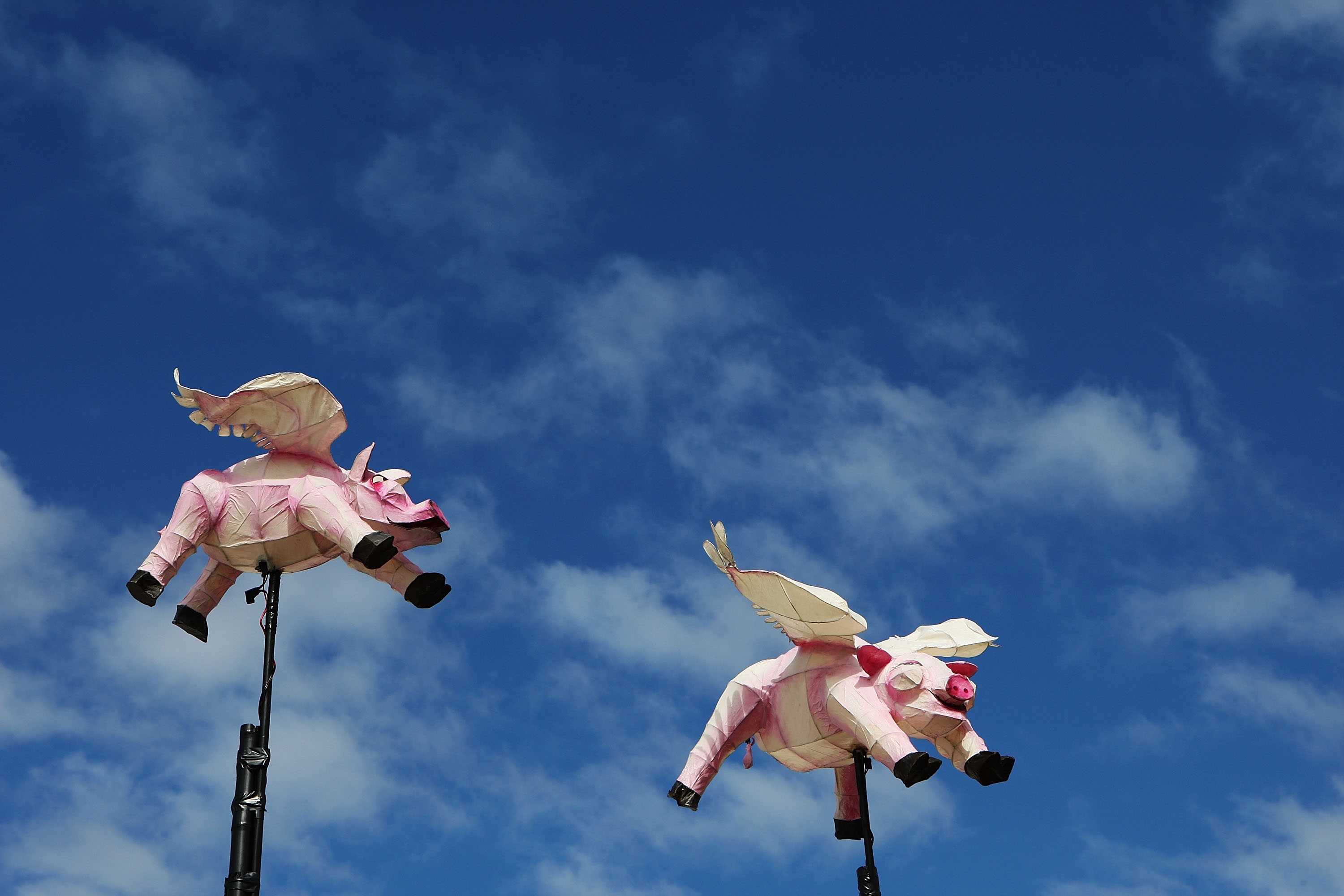 Rhetoric is often defined as “the art of language.” That might sound like a bit of a cliché (which it is), but it’s actually quite a nice way of saying that rhetorical devices and figures of speech can transform an ordinary piece of writing or an everyday conversation into something much more memorable, evocative, and enjoyable. Hundreds of different rhetorical techniques and turns of phrase have been identified and described over the centuries—of which the 21 listed here are only a fraction—but they’re all just as effective and just as useful when employed successfully.

You’ll no doubt have heard of hyperbole, in which an over-exaggeration is used for rhetorical effect, like, “he’s as old as the hills,” “we died laughing,” or “hyperbole is the best thing ever.” But adynaton is a particular form of hyperbole in which an exaggeration is taken to a ridiculous and literally impossible extreme, like “when pigs fly!” or “when Hell freezes over!”

Often used in literature to create a stream-of-consciousness style in which a character’s thoughts flit from one idea to the next, anacoluthon describes a sudden and unexpected break in a sentence that leads to it being concluded in a different way than might have been expected. Although it can sometimes be due to nothing more than a speaker losing their train of thought, in practice anacoluthon can also be OH MY GOD I’VE LEFT THE GAS ON.

Anadiplosis is an ingenious and memorable rhetorical device in which a repeated word or phrase is used both at the end of one sentence or clause and at the beginning of the next. As with practically all rhetorical devices, William Shakespeare liked using it (“She being none of your flesh and blood, your flesh and blood has not offended the king”), but you can thank George Lucas for what is now probably the best-known example: “Fear leads to anger. Anger leads to hate. Hate leads to suffering.”

You know when you pose a question for dramatic effect and then immediately answer it yourself? That’s anthypophora.

If you’ve ever friended or texted someone, emailed or DMed something, tabled a meeting or motorwayed your way across country, then you’ll be familiar with antimeria, a rhetorical device in which an existing word is used as if it were a different part of speech. More often than not this involves using a noun as if it were a verb, a semantic process better known as “verbing” (which is actually a perfect example of itself). Slang (and modern English in general, for that matter) loves antimeria, but it is Shakespeare who remains the undisputed master of it. Cake, drug, kitchen, squabble, ghost, blanket, graze, elbow, and crank were all only ever used as nouns before he got hold of them.

Prosopopoeia is just a more formal name for personification, in which inanimate objects are either described in human terms or given human characteristics. The opposite of that is antiprosopopoeia, a figure of speech in which a person is compared to an inanimate object. That might sound odd, but it’s actually a very effective form of metaphor able to confer a great deal of detail or information in a clever and often witty way—think about what it means to call someone a doormat, a tank, a firecracker, a mattress, or a garbage disposal and you’ll see precisely how effective it can be.

The Bard. The Iron Lady. The King. Ol’ Blue Eyes. When you substitute a proper name for an epithet or a nickname, that’s antonomasia.

In Act 2 of King Lear, the eponymous king rages against two of his daughters in a disjointed speech that ends with the famous lines, “I will have such revenges on you both that all the world shall—I will do such things—what they are yet, I know not, but they shall be the terrors of the earth!” The point at which Lear’s threat of revenge trails off, restarts, and trails off again is a perfect example of aposiopesis, a rhetorical ploy in which an idea is left unsaid or a sentence is left incomplete purely for emphatic effect. Why I oughta…

Right. Okay. Here goes. Asterismos is the use of a seemingly unnecessary word or phrase to introduce what you’re about to say. Semantically it’s fairly pointless to say something like “listen!” before you start talking to someone, because they are (or at least should be) already listening. Rhetorically, however, asterismos is a seriously clever way of subconsciously drawing attention to what you’re about to say.

“We got there, the weather was bad, we didn’t stay long, we got back in the car, we came home, end of story.” When you deliberately miss out the conjunctions between successive clauses, you’re left with a choppy and abrupt series of phrases that energetically push things forward, an effect properly known as asyndeton. The opposite is called polysyndeton, when you add more conjunctions to a phrase or clause than are strictly necessary, often with the effect of intentionally dragging it out: “We ate and drank and talked and laughed and talked and laughed and ate some more.”

Apart from the fact that it’s part of a great speech, one of the reasons why John F. Kennedy’s famous “ask not what your country can do for you, ask what you can do for your country” line is so striking is that is a fine example of chiasmus, a clever rhetorical formation in which the order of a pair of words or phrases in one clause (your country, you) is inverted in the next (you, your country). This gives a rhythmic and instantly memorable criss-cross pattern, AB-BA, which appropriately enough takes its name from the X-shaped Greek letter chi.

Congery is a form of tautology, the rhetorical use of repetition. It refers to a writer or speaker using a number of different and successive words or phrases that all effectively mean the same thing, purely to emphasise the point. That’s it. That’s all. Done. Finished. Finito.

In a dialogismus, a speaker either imagines what someone or something else might be thinking (“I bet that guy’s thinking, ‘what am I doing here?’”), or else paraphrases someone’s earlier words (“‘Don’t worry!’ she told me. ‘Everything will be fine!’”). In either case, the speaker ends up talking not as themselves just for rhetorical effect.

If a euphemism is a nicer turn of phrase used in place of a more offensive or embarrassing one (like “call of nature” or “bought the farm”), then a dysphemism is an offensive or detrimental phrase deliberately used in place of a nicer one. This applies to everything from using an insult instead of someone’s name, to phrases like frankenfood and junk food that try to influence what we should think of genetically modified crops and take-out restaurants with just a few choice words.

An expeditio is that instantly recognisable figure of speech in which you list a number of alternatives, and then proceed to eliminate all but one of them. “We can go for Italian, Mexican, or Chinese. But I had Chinese last night and you hate garlic, so it’s going to have to be Mexican.”

When you use more words than are in actual fact absolutely really strictly necessary in order to communicate and make your point effectively and efficiently, that’s a pleonasm. It needn’t be as clumsy and as long-winded as that, of course, and more often than not the term pleonasm is used to apply to what is otherwise called “semantic redundancy,” in which extra qualifying words are used to force a point home—like “empty space,” “boiling hot,” or “totally unique.”

A synecdoche is a figure of speech in which a part or component of something is used to represent that whole—like calling a car your “wheels,” the staff of a company the “hands,” or the film industry as a whole “Hollywood.”

Tmesis is the proper name for that fan-bloody-tastic technique of splitting a word in half by inserting another word inside it. More often than not, the word being inserted in the other is a swearword (you can provide your own examples for that), but it needn’t always be—tmesis can be used any-old-how you like.

There are several different forms and definitions of precisely what a zeugma is, but in basic terms it describes a figure of speech in which one word (usually, but not always, a verb) governs or is directly related to two or more other words in the same sentence. So you can run out of time, and out of the room. You can have a go, and a laugh. And, to paraphrase Charles Dickens, you can go home in floods of tears and a sedan-chair.

Paul Anthony Jones is a writer and musician from Newcastle upon Tyne. He is the author of word origins guide Haggard Hawks and Paltry Poltroons, and runs its tie-in Twitter account @HaggardHawks.