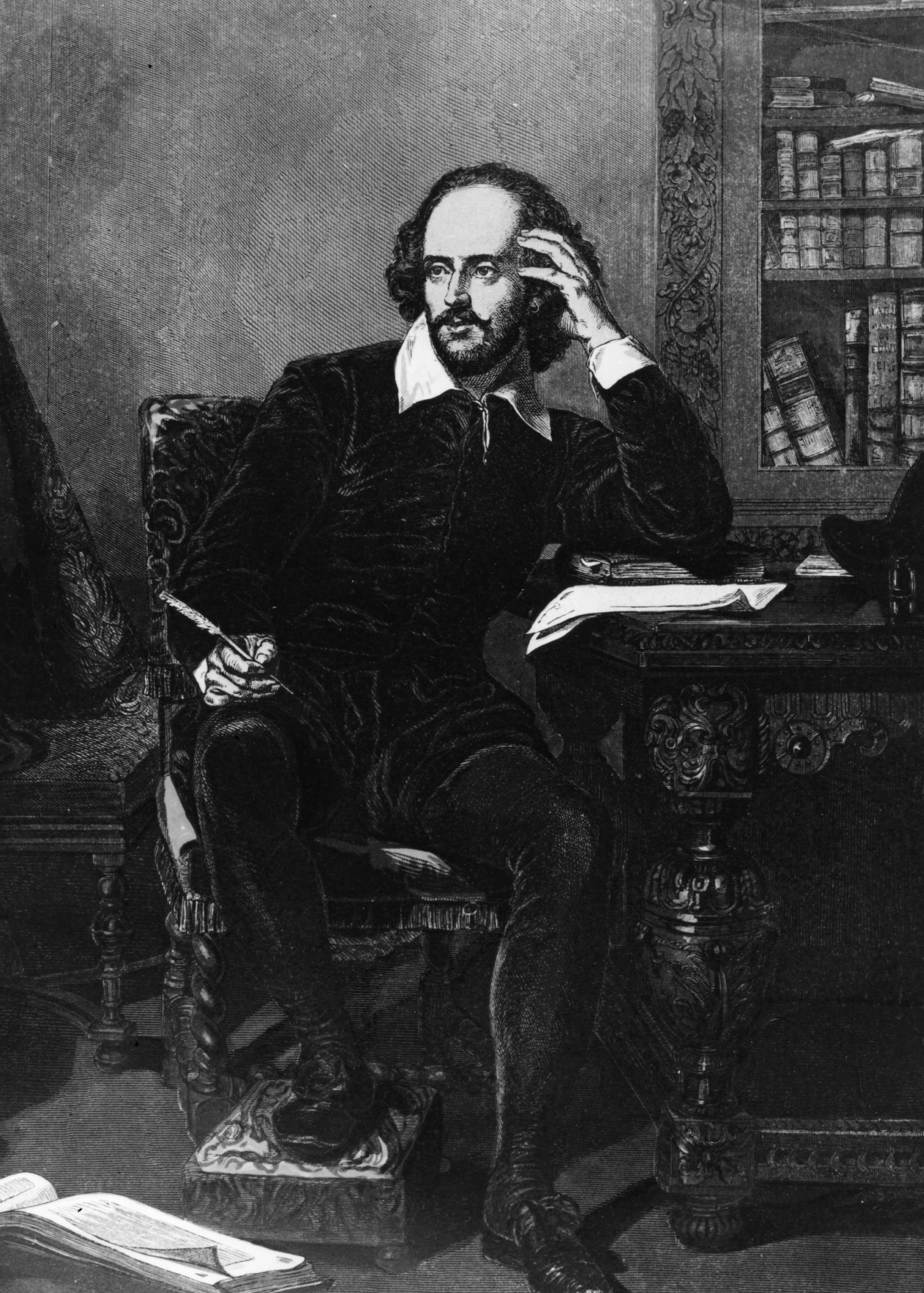 William Shakespeare devised new words and countless plot tropes that still appear in everyday life. Famous quotes from his plays are easily recognizable; phrases like "To be or not to be," "wherefore art thou, Romeo," and "et tu, Brute?" instantly evoke images of wooden stages and Elizabethan costumes. But an incredible number of lines from his plays have become so ingrained into modern vernacular that we no longer recognize them as lines from plays at all. Here are 21 phrases you use but may not have known came from the Bard of Avon.

"Nay, if our wits run the wild-goose chase, I am done, for thou hast more of the wild-goose in one of thy wits than, I am sure, I have in my whole five. Was I with you there for the goose?" — Mercutio

This term didn't originally refer to actual geese, but rather a type of horse race.

"O, beware, my lord, of jealousy! It is the green-eyed monster, which doth mock the meat it feeds on." — Iago

Before Shakespeare, the color green was most commonly associated with illness. Shakespeare turned the notion of being sick with jealousy into a metaphor that we still use today.

"Be thou as chaste as ice, as pure as snow, thou shalt not escape calumny. Get thee to a nunnery, go." — Hamlet

Though Shakespeare never actually used the full phrase "pure as the driven snow," both parts of it appear in his work. For the record, this simile works best right after the snow falls, and not a few hours later when tires and footprints turn it into brown slush.

"True is it that we have seen better days and have with holy bell been knolled to church, and sat at good men's feasts and wiped our eyes of drops that sacred pity hath engendered." — Duke Senior

The first recorded use of "seen better days" actually appeared in Sir Thomas More in 1590, but the play was written anonymously, and is often at least partially attributed to Shakespeare. We do know Shakespeare was a fan of the phrase; he uses "seen better days" in As You Like It, and then again in Timon of Athens.

"If? Thou protector of this damnèd strumpet, talk'st thou to me of "ifs"? Thou art a traitor—Off with his head." — Richard III

The Queen of Hearts in Alice in Wonderland wasn't the first monarch with a penchant for liberating heads from bodies. Her famous catchphrase came from Shakespeare first.

"Now tell me how long you would have her after you have possessed her." — Rosalind

"Forever and a day" — Orlando

We have the Bard to thank for this perfect fodder for Valentine's Day cards and middle school students' love songs.

Where would Green Day be without Shakespeare’s riposte? In addition to acoustic ballad titles, "good riddance" also applies well to exes, house pests (both human and insect), and in-laws.

"Yes, for a score of kingdoms you should wrangle, and I would call it fair play." — Miranda

Prospero's daughter never would have been able to predict that "fair play" is used more often now in sports than it is for the negotiation of kingdoms.

"If he could right himself with quarreling, some of us would lie low." — Antonio

Shakespeare's plays contain brilliant wisdom that still applies today. In "lie low," he concocted the perfect two-word PR advice for every celebrity embroiled in a scandal.

"Nay, an I tell you that, Ill ne'er look you i' the face again: but those that understood him smiled at one another and shook their heads; but, for mine own part, it was Greek to me." — Casca

"It's all Greek to me” might possibly be the most intelligent way of telling someone that you have absolutely no idea what's going on.

“As good luck would have it, comes in one Mistress Page; gives intelligence of Ford's approach; and, in her invention and Ford's wife's distraction, they conveyed me into a buck-basket.” — Falstaff

Determining whether a Shakespeare play is a comedy or a tragedy can largely be boiled down to whether good luck would have anything for the characters.

"So, again, good night. I must be cruel only to be kind. Thus bad begins and worse remains behind." — Hamlet

Here’s an idiom that proves just because a character in a Shakespeare play said it doesn't necessarily mean it's always true. Hamlet probably isn't the best role model, especially given the whole accidentally-stabbing-someone-behind-a-curtain thing.

"But love is blind, and lovers cannot see the pretty follies that themselves commit, for if they could Cupid himself would blush to see me thus transformèd to a boy." — Jessica

Chaucer actually wrote the phrase ("For loue is blynd alday and may nat see") in The Merchant’s Tale in 1405, but it didn't become popular and wasn't seen in print again until Shakespeare wrote it down. Now, "love is blind" serves as the three-word explanation for any seemingly unlikely couple.

"If the assassination could trammel up the consequence, and catch with his surcease success; that but this blow might be the be-all and the end-all here, but here, upon this bank and shoal of time, we’d jump the life to come." — Macbeth

Macbeth uses the phrase just as he’s thinking about assassinating King Duncan and, ironically, as anyone who's familiar with the play knows, the assassination doesn't turn out to be the "end all" after all.

"If it be so, sir, that you are the man must stead us all, and me amongst the rest, and if you break the ice and do this feat, achieve the elder, set the younger free for our access, whose hap shall be to have her will not so graceless be to be ingrate." — Tranio (as Lucentio)

If you want to really break the ice, the phrase appears to have come from Thomas North, whose translation of Plutarch's Lives of the Noble Grecians and Romans provided much of the inspiration for Shakespeare's ancient word plays. This is a great meta "did you know" fact for getting to know someone at speed dating.

"The king's a bawcock, and a heart of gold, a lad of life, an imp of fame, of parents good, of fist most valiant." — Pistol

Turns out, the phrase "heart of gold" existed before Douglas Adams used it as the name of the first spaceship to use the Infinite Improbability Drive in The Hitchhiker’s Guide to the Galaxy.

"This is a way to kill a wife with kindness, and thus I'll curb her mad and headstrong humor." — Petruchio

The Shakespeare canon would contain a lot fewer dead bodies if his characters all believed they should kill their enemies with kindness instead of knives and poison.

Though high school students suffering through English class may disagree, Shakespeare was a master of humor in his works, writing both slapstick comedy and sophisticated wordplay. And, as the Porter scene in Macbeth illustrates, he's also the father of the knock-knock joke.

"To towers and windows, yea, to chimney tops, your infants in your arms, and there have sat the livelong day with patient expectation to see great Pompey pass the streets of Rome." — Mureless

Today, the phrase "live long day" is pretty much exclusively reserved for those who have been working on the railroad.

"Why then, can one desire too much of a good thing?— Come, sister, you shall be the priest and marry us.—Give me your hand, Orlando.—What do you say, sister?" — Rosalind

Modern readers often call Shakespeare a visionary, far ahead of his time. For example: he was able to write about desiring too much of a good thing 400 years before chocolate-hazelnut spread was widely available.

"The game's afoot: follow your spirit, and upon this charge cry 'God for Harry, England, and Saint George!'" — King Henry V

Nope! It wasn't Sir Arthur Conan Doyle who coined this phrase—Sherlock Holmes' most famous catchphrase comes from Henry V, although both characters do often tend to find themselves around dead bodies.