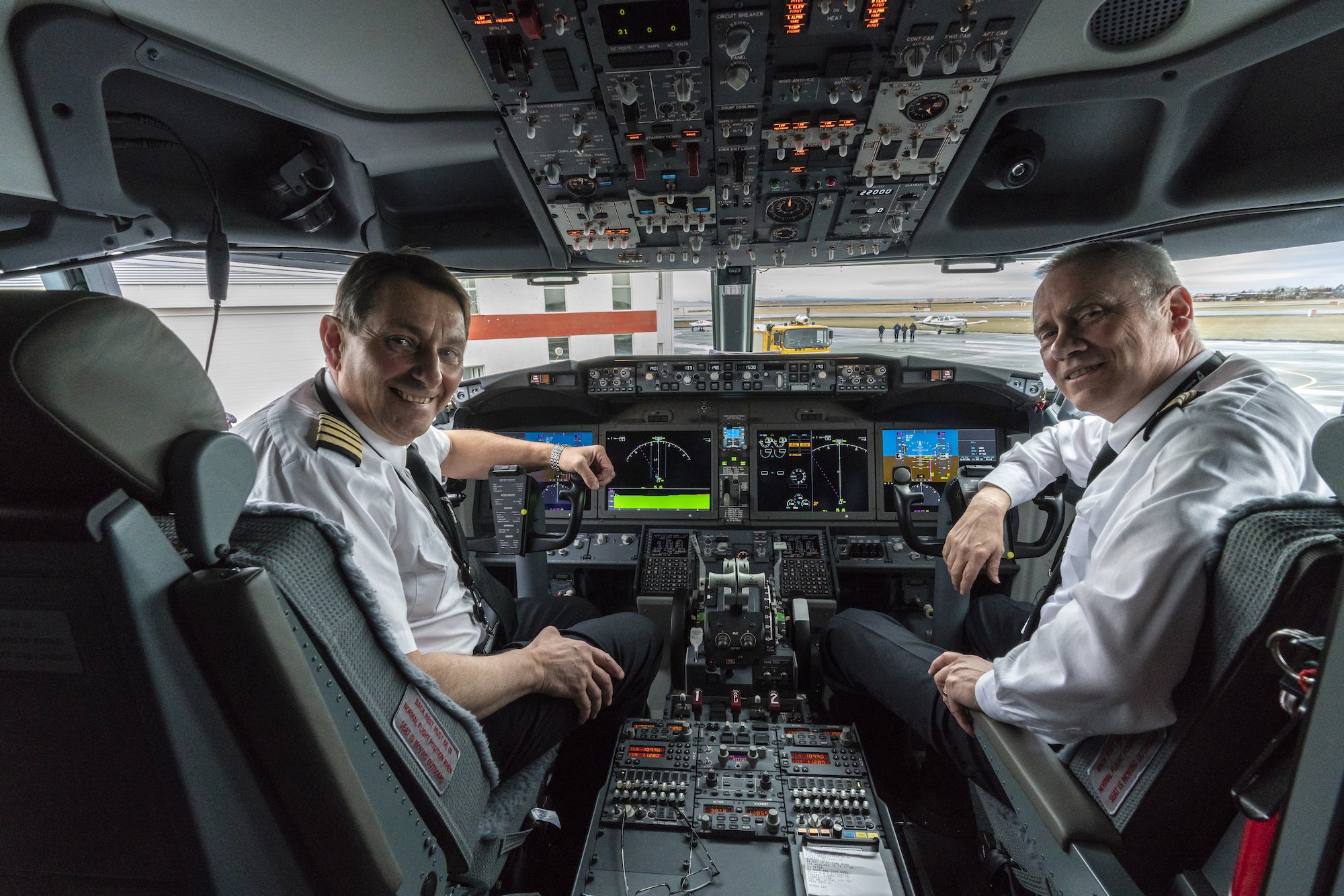 Often described as having the best “view from the office” in the world, airline pilots are tasked with shuttling hundreds of passengers to and from domestic and international destinations. The responsibility is considerable, and so are the requirements: Commercial airlines typically demand thousands of hours of flight time and dues-paying in cargo and regional jobs before they’ll even grant an interview. And even then, the odds of making it to the prized “left chair”—the captain’s seat—are a long shot.

To find out what makes these top-class aviators tick, we asked three pilots for major commercial carriers about life in the skies. (Owing to their media-averse industry, none wanted to identify their employer; one prefers to be known only by his first name.)

1. They Can Fly for Free—They Just Don’t Want To.

Pilots don’t really get better employee perks than anyone else who works for the airline. While they can fly for free, they have to wait for a standby (available) seat to be open on a flight, and most pilots planning a vacation or structured itinerary don’t want to be at the mercy of that variable. “It’s too unpredictable,” says Patrick Smith, a first officer (co-pilot) and author of Cockpit Confidential. “If a baggage handler has more seniority than me, he’ll be ahead on the standby list.”

2. There’s No Reading in the Cockpit.

Eric Auxier, a captain with more than two decades of experience for a major carrier, says that most name-brand airlines prohibit taking anything into the cockpit that could serve as a distraction: no magazines, no paperbacks, no music, and no knitting. “We talk amongst ourselves," he says. "That’s all we’re legally allowed to do.”

3. There’s No Napping, Either. Technically.

”But I can’t say it never happens,” says Tim, a pilot at a major airline. “At present, the regulations do not officially allow it, but sleep studies have proven that short catnaps, especially when flying in the wee hours, are actually beneficial to wakefulness. Unfortunately, the FAA hasn't put anything in writing that allows this.” To avoid exhausted pilots, the FAA has instead issued a guide, FAR-117, that mandates minimum rest periods (like a full eight hours of sleep) and maximum working times for pilots—usually no more than 30 hours per week, according to Auxier.

4. They’ll Let You Look Around.

Before the plane doors are shut, Smith says many pilots are happy to offer nervous fliers and kids a peek inside the cockpit. “People are more than welcome to come up and say hello before pushing off,” he says. “90 percent of pilots love it when people do that.”

5. There’s a Spare Seat in the Cockpit.

The cockpit has what’s known as a “jump seat,” a retractable third chair that allows for FAA inspectors or trainees to tag along on flights. “If it’s not in use, it can be used by a qualified pilot,” Auxier says. Another professional perk? Sort of: In most cases—especially on long flights—a pilot would rather sit in coach. The chair is pretty uncomfortable.

6. They Wish You Wouldn’t Ask Them to “Pull Over.”

Though pilots don’t usually have direct interaction with passengers, Smith prefers travelers who don’t perceive them as bus drivers. “Asking if we can land so they can get off, it doesn’t work that way,” he says. “One woman who left her medication in her checked luggage wanted someone to ‘go downstairs’ to get it.” Unfortunately for her:

7. There is No Action-Movie Cargo Compartment Underneath the Plane.

Wesley Snipes and Harrison Ford have misled the movie-going public into believing there’s an entire layer under a plane full of luggage, pets, and enough room to have a boxing match. It’s just not true. “You might have alcoves accessible under the cabin or cockpit,” Smith says, “but they’re the size of a closet."

8. They Can Have One Hell of a Commute.

In theory, a pilot can live anywhere in the country, since they’re able to catch rides on flights that connect them to their “base” airport. But commuting takes up more unpaid days per month, requires them to take early flights to fill available seats, and generally makes a hard job that much harder. “If the airplane fills up with paying passengers, the pass riding employees will simply be left behind,” Tim says. “Sometimes it's necessary to leave home the day before to ensure that you are in base in time for your trip. Commuting can really suck.” (Tim no longer does it: He moved closer to his base and now drives to work.)

9. Peeing Can Be Painful.

According to Smith, kidney stones are a common occupational hazard. Pilots don’t always hydrate properly, and post-9/11 Federal Aviation Association (FAA) rules about entering the cabin can make a trip to the bathroom a chore. It all adds up to stress on the urinary tract. “The protocols for leaving the cockpit are very strict,” he says. “It’s inconvenient to get up when the cabin crew is serving refreshments, too, so we tend to hold it in.”

10. They Shake Their Heads at the “Passenger Embellishment Factor.”

The “PEF” is pilot slang for travelers who tend to exaggerate the sensations of air travel. “Even in rough turbulence, the plane is never changing altitude more than 10 or 20 feet either way,” Smith says. “There’s this idea it’s plummeting hundreds of feet. Not true. Same with take-offs and descents. The nose is, at most, 20 degrees up or 5 degrees down. If I put you in a 30-degree nose-down descent, you’d know how steep that really is.”

Despite what movies and television would have you believe, a co-pilot is not some kind of subordinate apprentice who looks to the captain for all the answers. “Co-pilots are fully qualified pilots,” Auxier says. “They could just as easily be the pilot. That is solely a factor of seniority.” Smith bristles when media outlets refer to a singular pilot in stories: “We normally take turns. If one of us flies to London, the other flies back to New York. There are two pilots.”

Another pilot pet peeve: the idea they climb into a cabin and watch a computer do their job for them. “A plane no more flies itself than a high-tech operating room performs an organ transplant by itself,” Smith says. “There are routing changes, communications issues, navigational issues, monitoring fuel burn. There is always some task going on. We might not have our hands on the wheel as often as we did years ago, but we’re still flying it.”

13. The Uniform Gets Them A Lot of Respect. (In Foreign Countries.)

“Pilots in uniform seem to receive more respect when flying overseas than in the U.S.,” Smith says. “Culturally, I don’t know what it is. In some countries, maybe it’s that air travel is not taken for granted as much. In West Africa, little kids come running over to you. All the crew members are addressed as captain. They’ll salute you.”

Major media has gotten a lot of play out of profiling pilots who are paid so little that they sometimes apply for food stamps in order to make ends meet. While this is more common in regional circles, Tim says it’s not far-fetched, either. “People always seem to assume that if you fly for an airline in any capacity that you're loaded,” he says. Regional pilots can make as little as $21,000 a year, according to Bloomberg, while the cost of flight training can exceed six figures.

Owing to many flight techniques being computer-assisted, pilots tend to appreciate landings, which are still almost fully operated by the human hands in the cockpit. “It’s something that requires all of our skills,” Auxier says. “It’s where a lot of the job satisfaction comes from. It’s a volatile industry with no guarantees. You need to just enjoy the journey.”