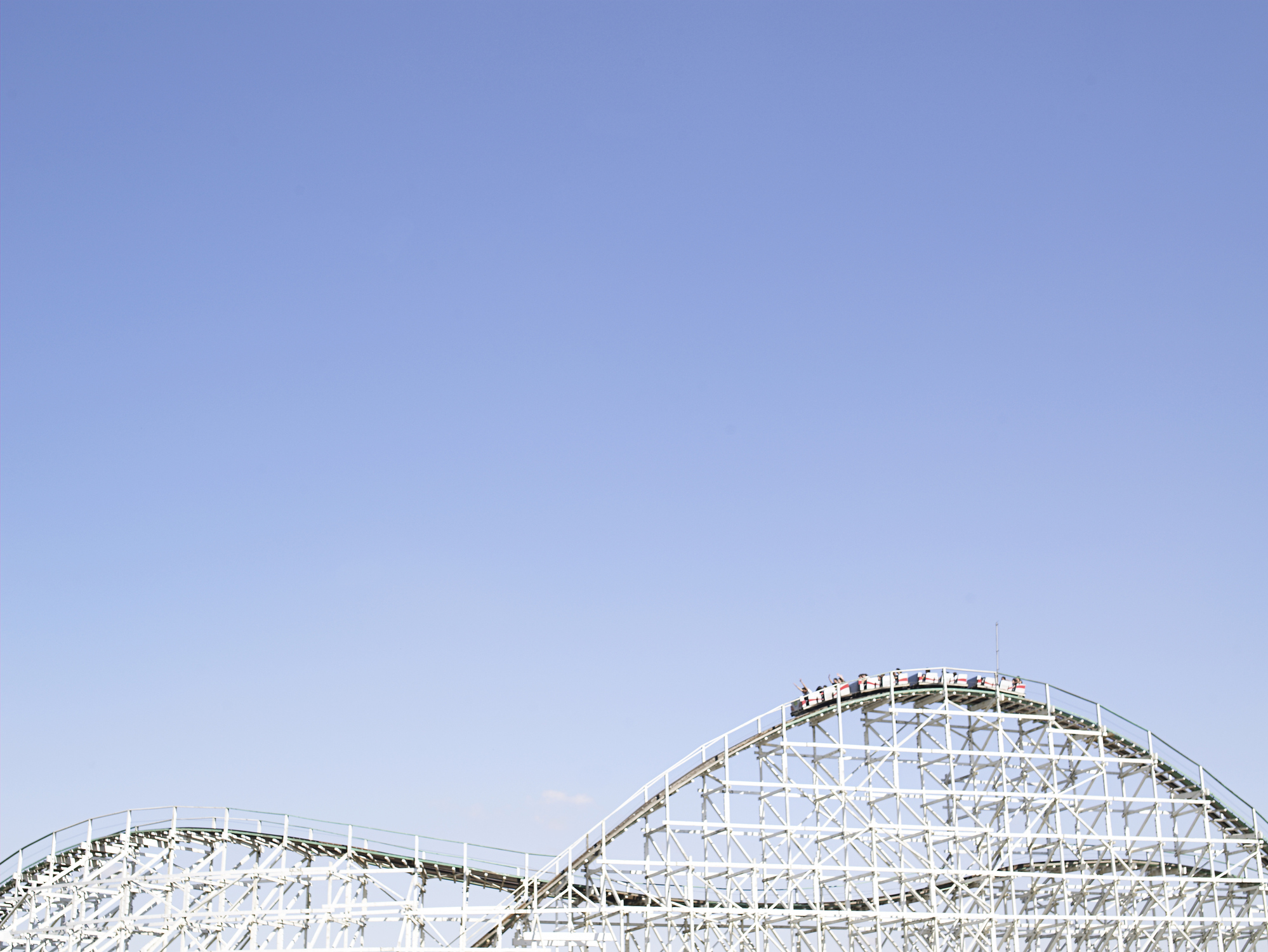 On August 16, 1898, Edwin Prescott, a roller coaster designer from Massachusetts, was granted a patent for an improvement to roller coasters that ride enthusiasts have come to take for granted—the vertical loop. While the roller coaster depicted in the patent’s illustration, and later realized as the Loop the Loop coaster at Coney Island, wasn’t the first to invert riders in a loop, it did usher in the safer, more comfortable and now prevailing elliptical-shaped loop.

Prescott’s Loop the Loop was surprisingly unsuccessful—mostly due to the fact that only one car with four passengers could ride the coaster at a time. It closed in 1910 after only nine years in operation. But the inventor’s pioneering spirit is honored every August 16 on National Roller Coaster Day.

To mark the occasion, we bring you 14 fun facts about roller coasters.

1. The American roller coaster was invented to save America from Satan.

It may be hard to believe with roller coasters named Dare Devil Dive, Steel Vengeance and The Beast, but the rides were initially developed as a distraction from Satan’s temptations.

In 1884, disgusted with the uprise of hedonistic amusements like saloons and brothels, LaMarcus Adna Thompson invented the Switchback Gravity Railway, a patented coaster that visitors to Brooklyn’s Coney Island could ride for just five cents. Because it was situated at Coney Island, Thompson is often referred to as the “Father of the American Rollercoaster” for establishing its connection to amusement parks. His initial invention, however, isn’t like the thrill-inducers we know today.

These were gravity-powered, slow-moving cars that faced outward, rather than forward, so one could enjoy a constructed scene as the car coasted at less than six miles per hour. These scenes would often be built to emulate beautiful landscapes around the world; Thompson constructed one of the Swiss Alps, for instance, and another of Venetian canals.

2. One of the earliest coasters in America carried coal before it carried thrill seekers. Predating Thompson’s Satan-distractor by a few decades was a railway that served dual purposes: a coal carrier in the morning and a joy ride in the afternoon. The Mauch Chunk Switchback Railway was a gravity railway built in 1827 to haul coal about nine miles between coal mines. Gravity forced the cars carrying one-and-a-half tons of coal downhill, which were later brought back up by mules when emptied. With that much weight behind them, they could reach 50 miles per hour through the Lehigh Valley. As any curious human would ponder when gazing upon such a zippy device, tourists saw this and naturally thought: “I want to go to there.” In 1873, at its peak, Mauch Chunk carried 30,478 adrenaline-rushed passengers—each for just 75 cents. "Russian mountains" helped to inspire early roller coasters of Europe, like the Promenades Aeriennes that opened in Paris in 1817. Wikipedia

In the 15th century, Russians really upped the ante on sledding, building giant, wooden slides—some up to 70 feet tall and 100 feet in length—that they covered in slick ice. Mounted on an ice block with a straw seat, riders could reach up to 50 miles per hour.

Popularized in upper class circles, Catherine II of Russia had one installed on her property—but hers wasn’t limited to winter enjoyment. It had wheels that fit into grooved wooden rails, putting the “roller” in roller coaster and allowing the thrill to continue into summer months, as Wired reports. Some say her clout gave roller coasters the credibility to spread into Europe by the late 18th and early 19th centuries.

Sure, some roller coasters can loop-the-loop, but have you ever noticed it’s never perfectly circular? To oversimplify things, the loop isn’t a circle itself, it’s roughly the part where two circles hypothetically overlap, sort of like the middle of a Venn diagram.

Secondly, some physics: Centripetal force is what holds keeps you from falling out of roller coaster while it’s upside down. Simply speaking, this means when you’re traveling on a curved path and velocity is pushing you forward, you’re also being pulled toward the curve’s central point. When roller coasters are designed, the engineers’ first job is to establish how fast they want you to go. Taking centripetal force into consideration will dictate the shape and size of the loop. (For numbers folks out there, you can find a very in-depth mathematical breakdown on Gizmodo.) You just found out you have kidney stones, what’s next? Go to Disney World! Prescribing patients prone to the condition a trip to the amusement park as a form of preventative care sounds like a pretty wild idea, but wild enough that it works.

While wearing a backpack containing a transparent, 3D-printed kidney with a fake stone inside, researchers rode Disney World’s Big Thunder Mountain Railroad coaster about 20 times to study how the stone would move with all those ups and downs, according to a 2016 study in The Journal of the American Osteopathic Association. (The “work” won them a beloved Ig Nobel Prize.) About two-thirds of the time, the kidney stone passed—as long as the rider was seated at the back of the coaster.

6. You can thank inventor Phillip Hinkle for that clanking, anxiety-inducing powered chain lift that allows roller coasters to climb their first big inclines.

We no longer have to climb up a steep hill or stairs to board coasters because, in 1884, Phillip Hinkle patented a powered chain lift to pull the cars up that first incline before letting gravity do the rest of the work. Because of this, Hinkle coasters—like Coney Island’s Gravity Pleasure Road, also known as the Oval Coaster—could be built on elliptical paths, rather than from point A to point B. (The Mauch Chunk coal-mine coasters used mules to bring cars back to the top of a straight path, if you recall.)

7. The tallest roller coaster in the world is Kingda Ka at Six Flags Great Adventure in Jackson, New Jersey.

Interested in riding 465 feet straight toward the sky and then descending at a rapid clip? Then the Kingda Ka roller coaster at Six Flags Great Adventure in Jackson, New Jersey, is for you. It goes from zero to 128 miles per hour in only 3.5 seconds in order to speed you up the rails 45 stories high at a 90-degree angle, according to the website. The rest of the ride is a spiraling 50.6 second blur. So, you want to go fast? Hop on the Formula Rossa roller coaster at Ferrari World Abu Dhabi. This baby goes from zero to 149 miles per hour in just 4.9 seconds. You’ll peak at a maximum height of 170 feet and get an adrenaline rush worth 4.8Gs, according to their website. It’ll leaving you feeling like a real race car driver. Or maybe it’ll just leave you sick.

9. The longest roller coaster is Steel Dragon 2000 at Nagashima Spa Land in Japan.

When it opened on August 1, 2000, the Steel Dragon 2000 was the fastest, tallest and longest in the world. Others have stolen the fastest and tallest crowns, but the Dragon is still the longest. At 1.5 miles long, you’ll be on this coaster for four minutes. And what will you be doing in that time?

After the chain lift hill is an initial drop of 306.8 foot and a 252 foot camelback hill. The train subsequently rises up and into the figure-eight shaped helix. The train then passes through a mid-course brake run and over six more camelback hills, passing through two tunnels along the way before reaching the final brakes.

10. Fabio may have killed a goose with his face on a roller coaster.

If you’ve ever been suspicious of boarding a roller coaster because that’s awfully close to where birds are zooming around, your fears are not unfounded. In 1999, Fabio Lanzoni—a dashing Italian-American actor and model known to grace many covers of romance novels in the ‘80s and ‘90s—was allegedly struck in the face by a goose when debuting the Apollo’s Chariot at Busch Gardens Williamsburg. The moment lives on as a single sentence in his Wikipedia page—and several other blog posts. Lanzoni himself, however, claims a different version of events: The goose didn’t strike him; it struck a video camera that then struck him.

11. Whether or not you enjoy roller coasters may have to do with your brain chemistry.

The loops, hills, turns, speed, dips, drops and spirals of today’s coasters aren’t for everyone—and the chemical makeup of your brain might be the reason for your preference. Higher levels of dopamine, which are neurotransmitters associated with reward-motivated behavior, are linked to sensation-seeking activities. Another study that focused on bungee jumpers found that higher levels of endorphins led to increased feelings of euphoria, which would explain why some people dig the thrill so much.

Roller coasters of the future are bound to be wild. Last fall, in just one day, the U.S. Patent and Trademark Office published five patent applications from Universal for amusement park technologies. Two patents laid out ways for coaster cars to change direction while the coaster was moving, turning sideways as well as forward while the ride is in motion. Disney similarly applied for a patent that would allow a car’s seat to move while the coaster is cruising. But spinning cars aren’t the only thing coming. This spring, a German rollercoaster manufacturer shared conceptual renderings for what it called the "world's first hybrid roller coaster and waterslide," according to Orlando Weekly. Others are after that title too—a Canadian company plans to open a water-coaster, called the Cheetah Chase, in Indiana in 2020.

13. One of the most famous roller coaster designers had a “bad motion sickness problem.”

Ron Toomer is an American engineer credited with pioneering steel rollercoasters. He designed the Runaway Mine Ride at Six Flags Over Texas in 1966 known for its “tubular track” and the “inverted helix-shaped” Corkscrew, which sprung up at number of parks, in 1975. The first suspended coasters—where the car hangs like a swing—are Toomer’s too.

Just one problem: he had a really miserable motion sickness problem and rarely rode any of his rides. “They’ve gotten too big. And the bigger they are, the sicker I get. Just the thought of riding on one makes me queasy. I’d much rather sit at my drafting table and draw them,” he told People magazine in 1989.

14. There is a wooden roller coaster still in operation that was built in 1902.

If you like your coasters rickety, then Leap-The-Dips in Altoona, Pennsylvania, is the ride for you. The wooden rollercoaster was built in 1902, and, yes, 117 years later, it’s still in operation. It goes ten miles an hour and doesn’t have seatbelts, lapbars or headrests.

Leap-the-Dips was quite the innovation for its time. It is what’s called a side friction coaster, meaning it has weight-bearing road wheels underneath the cars to guide it and side-friction wheels off to the side that employ friction to keep cars on the track. (These types of coasters lack the now industry standard underfriction, or up-stop, wheels that keep speedy coasters from lifting off their tracks.) And the ride’s apparently still inspiring inventors today. Elon Musk’s Loop, a traffic solution that could be used to move vehicles at speeds of 150 miles per hour, is essentially a side friction coaster on steroids.

Rachael Lallensack is the assistant web editor for science and innovation at Smithsonian.